Q&A on Wednesday, June 3rd at 5pm PST/8pm EST with director Gabriela Cowperthwaite! Accessible on the rental page for the film. 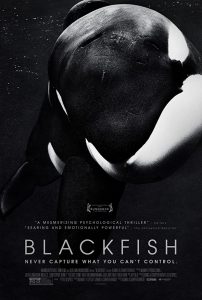 Many of us have experienced the excitement and awe of watching 8,000 pound orcas, or “killer whales,” soar out of the water and fly through the air at sea parks, as if in perfect harmony with their trainers. Yet this mighty black and white mammal has many sides – a majestic, friendly giant, seemingly eager to take trainers for a ride around the pool, yet shockingly – and unpredictably – able to turn on them at a moment’s notice. Blackfish unravels the complexities of this dichotomy, employing the story of notorious performing whale Tilikum, who – unlike any orca in the wild – has taken the lives of several people while in captivity. So what went wrong?

Shocking footage and riveting interviews with trainers and experts manifest the orca’s extraordinary nature, the species’ cruel treatment in captivity over the last four decades and the growing disillusionment of workers who were misled and endangered by the highly profitable sea-park industry. This emotionally wrenching, tautly structured story challenges us to consider our relationship to nature and reveals how little we humans truly know about these highly intelligent, and surprisingly sentient, fellow mammals that we only think we can control.

When you look into their eyes, somebody’s home.  Somebody’s looking back at you. . . but it may not be what you think.

Link to purchase tickets to stream this film in our Virtual Cinema will be available from Friday, May 29th (Thursday at Midnight) until Thursday, June 11th. To purchase and stream, click the button below!

A portion of every ticket purchased goes directly towards supporting Orange County’s only nonprofit Art-house theater. Tickets for Blackfish are $5!

“Haunting. The movie unfolds like a thriller. It’s a metaphor for the ages.” — David Edelstein, New York Magazine