Chronicling the extraordinary rise of one of the most colorful and controversial religious movements in American history, Hail Satan? is an inspiring and entertaining new feature documentary from acclaimed director Penny Lane (Nuts!, Our Nixon) and presented by Magnolia Pictures.

Q&A on Wednesday, June 10th at 5pm PST/8pm EST with director Penny Lane in conversation with Lucien Greaves, head of The Satanic Temple. Accessible on the rental page for the film. 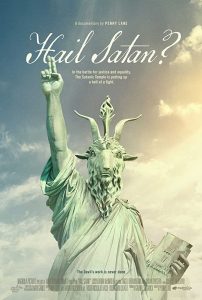 When media-savvy members of the Satanic Temple organize a series of public actions designed to advocate for religious freedom and challenge corrupt authority, they prove that with little more than a clever idea, a mischievous sense of humor, and a few rebellious friends, you can speak truth to power in some truly profound ways. As charming and funny as it is thought-provoking, Hail Satan? offers a timely look at a group of often misunderstood outsiders whose unwavering commitment to social and political justice has empowered thousands of people around the world.

Link to purchase tickets to stream this film in our Virtual Cinema will be available from Friday, June 5th (Thursday at Midnight) until Thursday June 11th. To purchase and stream, click the button below!

A portion of every ticket purchased goes directly towards supporting Orange County’s only nonprofit Art-house theater. Tickets for Hail Satan are $5!

“Effectively captures a powerful snapshot of American society today from the point of view of men and women who’ve aligned with the ultimate misfit.” — Carlos Aguilar, TheWrap

“A richly entertaining new documentary on the Satanic Temple’s exploits from director Penny Lane, who has become one of our foremost chroniclers of bizarro Americana.” — Ella Taylor, NPR

“Wickedly funny, fascinating and niftily made, this crowd-pleaser will reign at festivals and prove, yet again, that the devil always has the best tunes.” — Leslie Felperin, Hollywood Reporter