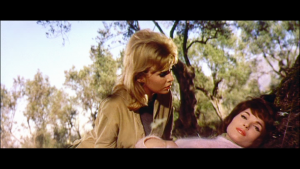 1960 was a monumental year for the horror genre. Considered as cinematic classics, heavily influencing and setting the creative standard for subsequent entries in the second half of the 20th century, and well into the 21st century, here is a list of 10 films every horror fan should see.

A lesser-known French and Italian collaborative film, known for its stunning visuals and cinematography, Blood and Roses is cited as a paradigm of early European horror.

A bitter heiress, jealous of her cousin and best friend’s engagement, becomes obsessed with a vampiric ancestor, while a series of murders occur around them.

The King of Gimmicks William Castel developed a unique style of publicity and camp, which left an indelible mark on filmmakers such as Joe Dante and John Waters.

A family inherits a mansion from a mysterious relative, soon discovering that it’s riddled with restless, ghostly occupants wanting to kill one of them.

A Mexican classic escaping traditional horror conventions, Macario is a visually stunning tale centered around The Day of The Dead and death.

Macario, a poor Mexican peasant, makes a deal with death, only to find that their deal is more than he bargained for.

One of the earliest influences on the modern slasher genre, sparking controversy at the time of release, Peeping Tom permanently damaged the career of director Michael Powell.

An aspiring filmmaker lives a double life as a serial killer, who captures his victims’ painful last moments before death.

6. Village of the Damned

A staple of classic British sci-fi horror, fraught with tension, creepy emotionless children actors, and an eerie sense of isolation, Village of the Damned follows a group of children, born under mysterious circumstances, as they use their mind-control powers to hold the inhabitants of a small village hostage.

A middle-class family hires a young female housekeeper, whose presence turns their little home to a living nightmare, as she becomes obsessed with murdering the family.

This essential Japanese arthouse horror film broke new artistic ground with its graphic images of torture, inspired by the Buddhist interpretations of hell.

Several interconnected tales of sinners, whose devious behaviors lead them to suffer, torment in hell beyond their wildest nightmare.

After a vampiric witch is executed by her brother, she returns centuries later to exact her revenge on his descendants.

2. Eyes Without A Face

One of the most important and bone-chilling French horror films of all time.

A mad doctor, who obsesses over fixing his daughter’s deformed face, kidnaps unsuspecting young women to graph their faces onto hers.

City of the Dead

The Ghost Cat of Otama Pond

When a secretary vanishes after embezzling $40,000, it’s up to her sister and boyfriend to investigate her disappearance at her last known whereabouts, the eerie Bates Motel.

LOVE this theater..OMG. I’ve been here several times now for different events. I’ve attended 2 of the 3 Scott Pilgrim events thrown by Cinemattack. I was even the lucky winner of the Scott Pilgrim album on vinyl. I don’t have a record player..but may as well be a trophy for me because I never win anything! lol. I also attended “The Last Unicorn” event with Peter S Beagle- the author speaking and answering a Q and A afterwards. This was so awesome. I have always loved loved this movie and it was … END_OF_DOCUMENT_TOKEN_TO_BE_REPLACED