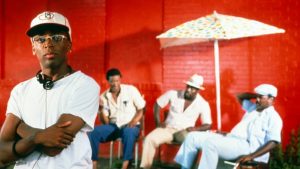 A tale of how an interracial relationship built on heat, A.K.A. “jungle fever”, affects not only the couple but everyone around them.  Flip (Wesley Snipes), a married black man, begins an affair with his new secretary Angie, a white woman. Further complications hit the couple when they face harsh scrutiny for being in a mixed relationship, from both sides, forcing them to reevaluate their relationship.  This film has an all-star cast, including Samuel L. Jackson, the film debuts of Halle Berry and Queen Latifa, and film icon Antony Quinn, all delivering outstanding and impactful performances.

This documentary/comedy-special hybrid follows The Kings of Comedy Tour, featuring comedic heavyweights Steve Harvey, Cedric the Entertainer, D.L. Hugely, and Bernie Mac, both on and off the stage. Viewers are given access to behind the scenes aspects, including the promotional process and how the comedians prepare for a show. Each comedian, while unique in his own comedic style, shows the similarities and diversity of the African-American experience. The success of this film inspired numerous spin-offs, including The Queens of Comedy, The Latin Kings of Comedy, and The Blue-Collar Comedy Tour. It stands as an essential stand-up comedy film of the early 21st century.

Lee’s first film to win an Oscar (Best Original Screenplay), is based on the true story of a 1970’s undercover sting of the Ku Klux Klan, led by Officer Ron Stallworth (John David Washington), the first African-American police officer in Colorado Springs, Colorado. Stallworth goes undercover to infiltrate the Klan, attempting to investigate a possible Klan terrorist attack. While communicating with the local and national Klan leaders by phone, Flip (Adam Driver) a white officer, portrays him at Klan meetings. During this investigation, Stallworth is forced to deal with the consequences of the racism he witnesses and experiences, both as a black man and a police officer. Though this is set in the 1970s, this film shows how the racism and hate of yesteryear is still alive and well today, with an ending that will leave you speechless.

The joint that brought Lee both critical acclaim and launched his career as a director. Nola, is a young African-American woman, with three male lovers, all of whom want her to commit solely to himself. She values the freedom of her lifestyle and has no intention of being imprisoned by monogamy. However, she and her lovers are forced to evaluate their relationships and what they could be if Nola chooses one of them. Evaluation of if this really the best way for them to live. The social standards of female sexuality are challenged, with a woman enjoying the freedom of multiple lovers, typically encouraged for men, but taboo for women. Recently, this film became the basis of the modern Netflix series of the same name, also created by directed by Lee.

Both of these HBO documentaries documented the heart-breaking devastation of the aftermath of Hurricane Katrina (August 23-31, 2005), immediately after the hurricane, and five years later. A wide variety of those impacted by Katrina’s destruction were interviewed, such as engineers, politicians, journalists, celebrities, and victims, including Lee’s frequent film score collaborator, Terrence Blanchard. These powerful, pull no punches documentaries are both very critical of the epic failure of the federal, state, and local governments reactions to the victims and their communities. They also an ode to the strength and resilience of the community.

If God Is Willing and da Creek Don’t Rise:

When the Levees Broke: A Requiem in Four Acts:

As diverse as a community can be, one event can bring everyone together. A small group of African-American men are taking a bus from Los Angeles to Washington D.C., to participate in The Million Man March, in Washington D.C., on October 16th, 1995. Each man comes from a different background, including a biracial police officer, a father and son, with a strained relationship, an aspiring filmmaker, and a gay couple. While on this 72-hour journey, the group has a variety of conversations and goes through an array of self-reflection and group challenges, bringing them closer together. By the end of the bus ride, they become forever intertwined.

This satire comedy/drama critically commentated on stereotypical images in film, with influences from Network and elements of The Producers. Pierre Delacroix, an African-American employee under contract to a television station, is frustrated by his white boss, who rejects every script he submits which portrays African-Americans in positive roles. Wanting to break his contract with the station and get fired, Pierre pitches his boss an idea of a modern minstrel television special, with African American actors in blackface, telling bluntly racist jokes, and performing in a stereotypical style. To Pierre’s horror, his modern minstrel show is a hit, leading him down a path of unforeseen consequences. A bold film which makes you analyze just how powerful, both in the sort and long term, these images have had on audiences and our society.

Lee’s most heart-wrenching documentary. This historical documentary evaluating the impact of the 16th Street Baptist Church Bombing, on Sunday, September 15th, 1963. The bombing, caused by a local Ku Klux Klan chapter, killed four little girls, Addie Collins, Cynthia Wesley, Carole Robertson, and Denise McNair. These senseless and devastating deaths outraged a nation, and contributed to the signing of the Civil Rights Act of 1964, by President Johnson. Instead of just focusing on the horrors of this act of domestic white supremacist terrorism, Lee combined home movies, interviews, and archival footage, to give viewers the individual story of each girl and the continuous impact this bombing had on American society, politics, and history. In 2017, this film was selected by the United States Library of Congress to be preserved in the National Film Registry, because it was “culturally, historically, or aesthetically significant”.

Not one to shy away from controversial film topics, Lee took on the life story of one of the most iconic, yet controversial African-American civil rights leaders, Malcolm X. Malcolm Little (Denzel Washington), is a hustler and thief, sentenced to jail for theft. During this time, Malcolm converts to Islam and joins the Nation of Islam, transforming himself into Malcolm X. Once Malcolm X is released, his actions and lectures rapidly gain public interest, launching him to a major social position of influence. He causes outrage in mainstream America and is consequently put under FBI surveillance. Although he was tragically assassinated after leaving The Nation of Islam, the film ends with the impact of his legacy. Known as Lee’s longest feature film, 3 hours and 22 minutes, Malcolm X is both visually stunning and artistic risk.

Pavarotti & Friends 99 for Guatemala and Kosovo

The jewel in the crown of Lee joints, which earned him his first Oscar nominations (Best Original Screenplay and Best Supporting Actor). On the hottest day of the year, racial tensions rise in a multi-ethnic community, especially between the Black and Italian residents, revolving around a pizza parlor. Stories of multiple characters, intertwine with Mookie’s (Spike Lee) daily life, a pizza delivery-man, who works for Sal’s Pizzeria, a local pizza parlor. As the heat rises, so does the racial tension, building up the pressure until it dramatically explodes into the destruction of Sal’s Pizzeria, after police brutality kills Radio Raheem, a black man from the neighborhood. The film’s blunt commentary on race and racism is as reverent today as it was 30 years ago. Like 4 Little Girls, it too is preserved in the United States Library of Congress’ National Film Registry, for being, “culturally, historically, or aesthetically significant”.

What a hidden gem! I had such a lovely time at a recent showing of Godzilla (1954). This theater is a bit timeworn, yet undeniably quaint and charming with an unconventional feel. And interestingly enough, the audience served as the sweet element of surprise. Those in attendance created an atmosphere of delight, comfort, and personal acceptance… and get this.. there was an actual host who presented a brief preface to the film just prior to viewing. Very collegiate, which I loved!  All in all pe… END_OF_DOCUMENT_TOKEN_TO_BE_REPLACED

LOVE this theater..OMG. I’ve been here several times now for different events. I’ve attended 2 of the 3 Scott Pilgrim events thrown by Cinemattack. I was even the lucky winner of the Scott Pilgrim album on vinyl. I don’t have a record player..but may as well be a trophy for me because I never win anything! lol. I also attended “The Last Unicorn” event with Peter S Beagle- the author speaking and answering a Q and A afterwards. This was so awesome. I have always loved loved this movie and it was … END_OF_DOCUMENT_TOKEN_TO_BE_REPLACED