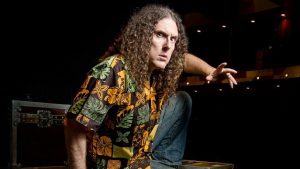 In honor of our “Frida After Dark” screening of the 30th Anniversary of Weird Al’s cult-classic UHF, here are 12 things you didn’t know about “America’s most celebrated nerd,” Weird Al Yankovic.

This occurs during the scene when Weird Al and his friend Bob are putting together their channel’s schedule on a white board.  There is a show on the 9-10 p.m. time slot called, “Volcano Worshipers Hour.”  This show’s title was the name of a club Weird Al started in high school: the “Volcano Worshipers” club.  He created the club just to get another picture in his high school year book.

While many people might just view Weird Al as just silly—he is highly intelligent.  His academic resume includes: staring kindergarten a year early, skipping second grade, and graduating high school at sixteen years old as the valedictorian.  He also attended college at Cal Poly Tech, getting his bachelors degree in architecture.

In 1997, Weird Al hosted a Saturday morning show on CBS.  The show was intended to be an educational children’s television program, with music and comedy, in the style of Pee-Wee’s Playhouse. The show only lasted for one season, with thirteen episodes.  (All the episodes can be found on YouTube.)

From 1984 to 2006, Weird Al hosted comedy specials for MTV, which parodied MTV’s format of music video programs.  The show featured fake celebrity interviews, as well as music videos from contemporary artists, like David Bowie and Weird Al himself.  Though most folks are not familiar with these specials, many of the fake interview segments are being used today for Weird Al’s live shows during his costume changes.

Since 1985, Weird Al has been nominated for 16 Grammy Awards—and has won five!
His wins include:

In 2011 and 2013, Weird Al published two children’s books: When I Grow Up, and its sequel, My New Teacher and Me.  The books follow Billy and his wild imagination.  When I Grow Up reached No.4 on the New York Times Best-Sellers list, on the Children’s Picture Book list in February 2011.

In 1993, Weird Al made his directorial debut with, “Bedrock Anthem.”  He continues to direct his music videos and has directed videos for other music artists.  These artists vary from the Black Crows, to Hanson, to The John Spencer Blues Explosion.

Since childhood, Lynn Manuel Miranda (the composer/writer of the groundbreaking theater musical Hamilton) was a massive Weird Al fan.  When Weird Al was interested in a possible musical theater project, Lynn jumped at the chance to meet with his childhood hero.  Though nothing came from that project, Lynn and Weird Al became good friends.  Later, as a part of Hamildrops, a series of Hamilton-related songs released online as singles, Weird Al composed a polka medley of Hamilton songs, called “Hamilton Polka.”

During the popularity of Madonna’s 1984 hit, “Like A Virgin,” she joked with a friend: “I wonder when Weird Al is going to do “Like a Surgeon?” Since Madonna’s friend knew Weird Al’s manager, she called him with the idea, and then it was presented to Weird Al. “Like a Surgeon” became one of Weird Al’s biggest hits for both the 1980’s and his career. Thanks Madonna!

From 1989 to 1991, Weird Al was facing a rut in his career.  However, in 1991, after hearing Nirvana’s “Smells like Teen Spirit,” Weird Al got permission from Nirvana’s singer, Kurt Cobain, to parody the song.  After the release of the parody “Smells like Nirvana,” Weird Al was able to get the kick start his career needed.  The parody also benefited Nirvana by helping to sell another million units of Nevermind (the album featuring “Smells like Teen Spirit”).  And according to Weird Al, “Kurt Cobain said he didn’t realize he’d made it until he saw the Weird Al video.”

In 1984, when Weird Al released his song, “I Lost on Jeopardy,” the television show Jeopardy!, had been off of air ways for five years.  Due to the success of the song, the public regained interest in the show, and Jeopardy! was able to get back on television later that year.  To this day, Jeopardy! has remained a staple in both American television and pop culture.

Weird Al is one of four performers/bands—alongside Madonna, U2, and Michael Jackson—to hold a record of having Top-40 hit in every decade since the 1980’s.

I love the Frida, as an avid movie watcher, it’s great to have a place to go where many classic, cult and underrated films are shown. I had the pleasure of attending “The Decline of Western Civilization” screening with director Penelope Spheres doing a Q&A. Her films are so historically important and impacted me at a very young age. I am forever grateful for the experience, like nowhere else would this be possible. I think it’s truly amazing what the staff and everyone involved is doing for the … END_OF_DOCUMENT_TOKEN_TO_BE_REPLACED

LOVE this theater..OMG. I’ve been here several times now for different events. I’ve attended 2 of the 3 Scott Pilgrim events thrown by Cinemattack. I was even the lucky winner of the Scott Pilgrim album on vinyl. I don’t have a record player..but may as well be a trophy for me because I never win anything! lol. I also attended “The Last Unicorn” event with Peter S Beagle- the author speaking and answering a Q and A afterwards. This was so awesome. I have always loved loved this movie and it was … END_OF_DOCUMENT_TOKEN_TO_BE_REPLACED