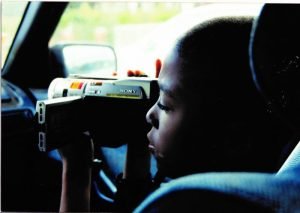 In 1999, filmmaker Davy Rothbart met Emmanuel Sanford-Durant and his older brother, Smurf, during a pickup basketball game in Southeast Washington, D.C. Davy began filming their lives, and soon the two brothers and other family members began to use the camera themselves. Spanning 20 years, this story illuminates a national, ongoing crisis through one family’s raw, stirring and deeply personal saga. Made from more than 1,000 hours of footage, it all starts on the street where they lived in 1999, 17 blocks behind the U.S. Capitol.

LOVE this theater..OMG. I’ve been here several times now for different events. I’ve attended 2 of the 3 Scott Pilgrim events thrown by Cinemattack. I was even the lucky winner of the Scott Pilgrim album on vinyl. I don’t have a record player..but may as well be a trophy for me because I never win anything! lol. I also attended “The Last Unicorn” event with Peter S Beagle- the author speaking and answering a Q and A afterwards. This was so awesome. I have always loved loved this movie and it was … END_OF_DOCUMENT_TOKEN_TO_BE_REPLACED