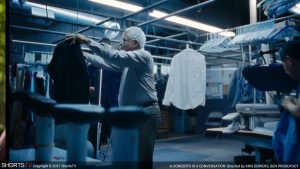 Do Not Split – Anders Hammer and Charlotte Cook (USA/Norway, 36 min.) – In 2019 Hong Kong was rocked by the largest protests since Britain handed back the area to China in 1997. This is the story of the protests, told through a series of demonstrations by local protesters that escalate into conflict when highly armed police appear on the scene.

Hunger Ward – Skye Fitzgerald and Michael Scheuerman (USA, 40 min.) – Filmed from inside two of the most active therapeutic feeding centers in Yemen, HUNGER WARD documents two female health care workers fighting to thwart the spread of starvation against the backdrop of a forgotten war. The film provides an unflinching portrait of Dr. Aida Alsadeeq and Nurse Mekkia Mahdi as they try to save the lives of hunger-stricken children within a population on the brink of famine.

A Concerto Is a Conversation – Ben Proudfoot and Kris Bowers (USA, 13 min.) – A virtuoso jazz pianist and film composer tracks his family’s lineage through his 91-year-old grandfather from Jim Crow Florida to the Walt Disney Concert Hall.

LOVE this theater..OMG. I’ve been here several times now for different events. I’ve attended 2 of the 3 Scott Pilgrim events thrown by Cinemattack. I was even the lucky winner of the Scott Pilgrim album on vinyl. I don’t have a record player..but may as well be a trophy for me because I never win anything! lol. I also attended “The Last Unicorn” event with Peter S Beagle- the author speaking and answering a Q and A afterwards. This was so awesome. I have always loved loved this movie and it was … END_OF_DOCUMENT_TOKEN_TO_BE_REPLACED