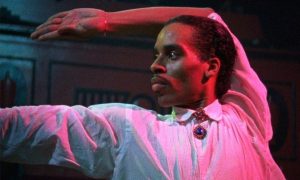 In 1990, Madonna released “Vogue,” to massive popular acclaim. The same year, Jennie Livingston’s Paris Is Burning greeted the world at LGBT film festivals in New York and San Francisco. While Madonna brought voguing to the forefront of popular (meaning “mainstream”) attention, Paris Is Burning presented a thoughtful exploration of 1980s New York’s ballroom scene and Black and Latinx gay and trans communities. Not only did the documentary address issues that affected black and brown LGBTQ people at large, it also amplified the voices of the individuals whose lives and deaths gave shape to LGBTQ+ history at large.

Today, Paris remains one of the most valuable and illuminating pieces of LGBTQ-focused media that exists. At a time when being gay or trans was still extremely taboo in the majority of American society, the very people who were facing this oppression spoke candidly of both their troubles and their aspirations. Voguing has been intermittent in popular fascination, but concern for LGBTQ+ issues is relatively novel. Paris was an opportunity for New York’s ballroom scene to define themselves, their culture, and their concerns on their own terms. Unlike the mainstream, voguing and drag was more than a fad; balls and Houses were modes of banding together against the violence and cruelty that the world harbored for Black, Latinx, gay, and trans people. (“[Gay people] just wanna be together… Just like a community.”)

It’s important to note that there has been progress in public regard for black and brown trans people in entertainment. In 2014, actor and activist Laverne Cox became the first openly transgender person to be nominated for a Primetime Emmy Award in any acting category, for her role in Netflix’s Orange Is the New Black. In 2018, Pose premiered on FX, boasting the largest ever transgender cast for a scripted series. Heavily inspired by Paris, Pose follows a cast of Black and Latinx trans and gay characters in the ballroom community as they navigate life in 1980s-90s New York City, grappling with friendships, family, and the HIV/AIDS crisis. “I believe that there’s a big future out there,” said model and educator Octavia St. Lauren in Paris, “with a lot of beautiful things.” And Pose is beautiful, not only for its groundbreaking cast but also for the Black and gay/trans creatives behind the scenes. It’s hard not feel hopeful for progress when one sees the wealth of critical and popular acclaim the series has earned.

But progress is only a part of the picture. One young, gay, Black man in Paris recounts advice he received from his father: “If you’re gonna do this, you’re gonna have to be stronger than you ever imagined.” Unfortunately, the current state of the world renders this advice still necessary. Black and brown LGBTQ+ people, especially trans women and gender non-conforming individuals, are in particular danger of violence and death. CNN reported that at least 37 trans and gender non-conforming people have been killed in 2020 alone, a record high. According to the Human Rights Campaign, about 66% of these victims were Black trans women. Simply being aware has long since ceased to be enough. Not for the art and beauty the world has been given but for the unadorned fact that they are human beings, current and potential victims of racist and trans-/homophobic violence and cruelty must be actively supported. Paris Is Burning may be many people’s introduction to LGBTQ+ history, but it doesn’t need to stop there. See this article for a list of ways to donate and support Black trans lives.

LOVE this theater..OMG. I’ve been here several times now for different events. I’ve attended 2 of the 3 Scott Pilgrim events thrown by Cinemattack. I was even the lucky winner of the Scott Pilgrim album on vinyl. I don’t have a record player..but may as well be a trophy for me because I never win anything! lol. I also attended “The Last Unicorn” event with Peter S Beagle- the author speaking and answering a Q and A afterwards. This was so awesome. I have always loved loved this movie and it was … END_OF_DOCUMENT_TOKEN_TO_BE_REPLACED