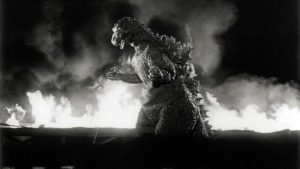 As a volunteer for the Frida as well as Creative Director of Los Angeles Arts Society, I’ve had the privilege to help bring Shin Godzilla to our cinema for the first time ever on Friday, June 7th! Originally released in 2016, Hideaki Anno’s striking reinterpretation of the classic character was played in only a few cities in the US, so it’s exciting that we’re not only showing it at the Frida, but showing it a week after the release of the second film in Legendary Pictures’ series, Godzilla: King of the Monsters.

Of course, with there being over 30 Godzilla films to sift through on the Criterion Channel, Starz, or what have you, I can understand why those unfamiliar with the franchise might be intimidated. Not to worry though, as I have pinpointed the five Godzilla movies you should watch before you see Shin Godzilla!

It’s an obvious choice, but the best place to began for the uninitiated is 1954’s Gojira, the very first film in the series. For all its reputation for suitmation silliness and general camp, it’s easy to forget that Godzilla started with a very dark and very different tone. The suitmation was still there, but there was nothing silly about it. On the contrary, Haruo Nakajima’s portrayal of the creature – to say nothing of the film itself – was meant to evoke memories of Japan’s experience during World War II.

Scenes of soldiers mobilizing, civilians dead or dying, and Tokyo being enveloped in a wall of flames all recall the wartime devastation wrought on the country, while Godzilla himself, covered in keloid scars and sensitive to bright light, is an allegorical victim of the twin atomic bombings of Hiroshima and Nagasaki. As serious as the series’ later offerings are silly, Gojira’s apocalyptic atmosphere and sociopolitical concerns are clear inspirations for Shin Godzilla even as that film takes place in its own separate continuity, the first in Toho’s series to do so.

2. Godzilla: King of the Monsters!

Some might take issue with this entry, but I think there’s a case to be made for Godzilla, King of the Monsters!’s inclusion in this list. The English title for the American release of the film, it’s easy to argue that it’s simply a retread of Gojira. The irony of this, however, is that many of these people will likely then criticize Jewell Enterprises (the production company behind this cut) for “butchering” the film, indicating that the film had to have been substantially changed in some way for it to be “butchered.” Namely, the insertion of new footage featuring Raymond Burr (perhaps best remembered today as the villain of Alfred Hitchcock’s Rear Window) as reporter Steve Martin, who follows and narrates the story.

Though generations of viewers have bitterly criticized Burr’s role as inconsequential to the drama unfolding before him (his performance was even lampooned in an episode of Pinky and Brain, with the show randomly cutting to him saying “Yes I see,” in an episode parodying Godzilla), there is a potency and poetry to his narration that emphasizes the unimaginable terror happening before his eyes. Not only that, but it’s interesting from a cultural perspective to see Godzilla’s first appearance the way American audiences first experienced it.

3. The Return of Godzilla

One of the surprisingly few other movies to feature Godzilla facing off against human rather than monstrous opponents, 1984’s The Return of Godzilla is another obvious source of inspiration for Shin Godzilla. Occupying a very special place in the franchise’s history, this film not only came out almost a decade after the last entry, but also 30 years after Gojira. As a result, Toho pulled no punches with this project and completely rebooted the series, completely disregarding every movie preceding it aside from Gojira and treating it as a direct sequel to that film.

Made against a backdrop of renewed Cold War tension, it’s little surprise that the film comments on the then-rocky relations between the United States and the Soviet Union. In fact, the movie’s pox-on-both-houses approach is so pronounced that New World Pictures felt the need to make the Americans more sympathetic and the Soviets more villainous in their cut of the film, Godzilla 1985. In addition to the compelling political commentary, Return of Godzilla offers a score by Rejiro Koroku that is as moving as it menacing as well as what has to be one of the most heartbreaking endings in the series’ history.

Despite being only the third film in the series, 1962’s King Kong vs. Godzilla is about as different from Gojira as, if I may invoke another long-running franchise, Skyfall is from Moonraker. Although the movie pokes fun at consumerism and media excess, these attempts at social awareness are mere pretenses to set up the goofy story and give our two champions an excuse to fight each other. Not that there’s anything wrong with that per se: the final battle between Kong and Godzilla has to be one of the best in the genre, justifying itself many times over with its savage thrills and unexpected laughs.

Considering the above information, it may be a bit strange to recommend this film as one to see before Shin Godzilla. I suppose I could come up with some highfalutin point about it being the best-performing Godzilla movie in Japan to date or many people’s introduction (including, among others, this writer) to the series, but as I previously alluded to, the sight of the king of the apes and the king of the monsters clobbering the snot out of each other is reason enough to watch King Kong vs. Godzilla for fans and newbies alike.

If you thought King Kong vs. Godzilla was an odd choice for this list, then you’ll get a real kick in the pants with this one! Funnily enough, that’s a very apt description for the unique viewing experience that is 1971’s Godzilla vs. Hedorah (dubbed and retitled by American International Pictures as Godzilla vs. The Smog Monster.) The first and only Godzilla film to be directed by Yoshimitsu Banno (an interesting character who, among other things, worked as an assistant director on Kurosawa’s Throne of Blood and Hidden Fortress), the movie’s, shall we say, memorable blend of impassioned environmentalism, animated non-sequiturs, and psychedelic music (to say nothing of graphic civilian casualties) split fans down the middle and remains controversial among them to this day.

For those of us who appreciate the demented genius of Hedorah, we can point to such gems as Hedorah inhaling from smokestacks like cigarettes, a catchy theme song (immortalized in AIP’s dub as “Save the Earth”), and the spectacle of Godzilla unexpectedly getting the best of  his otherworldly enemy in the most absolutely bonkers way possible. Of course, those who don’t appreciate the film may just as easily point to these as why they don’t like it, but hey, one man’s toxic sludge heap is another man’s treasure! On a side note, some have noted that parallels can be drawn between Hedorah and the way Godzilla is portrayed in Shin Godzilla. I won’t elaborate on how to save you from potential spoilers, but I will recommend that you see Godzilla vs. Hedorah (preferably the AIP dub if you can track a copy down) to prepare for Shin or, at the very least, to enjoy the mind-boggling madness of the film.

What a hidden gem! I had such a lovely time at a recent showing of Godzilla (1954). This theater is a bit timeworn, yet undeniably quaint and charming with an unconventional feel. And interestingly enough, the audience served as the sweet element of surprise. Those in attendance created an atmosphere of delight, comfort, and personal acceptance… and get this.. there was an actual host who presented a brief preface to the film just prior to viewing. Very collegiate, which I loved!  All in all pe… END_OF_DOCUMENT_TOKEN_TO_BE_REPLACED

LOVE this theater..OMG. I’ve been here several times now for different events. I’ve attended 2 of the 3 Scott Pilgrim events thrown by Cinemattack. I was even the lucky winner of the Scott Pilgrim album on vinyl. I don’t have a record player..but may as well be a trophy for me because I never win anything! lol. I also attended “The Last Unicorn” event with Peter S Beagle- the author speaking and answering a Q and A afterwards. This was so awesome. I have always loved loved this movie and it was … END_OF_DOCUMENT_TOKEN_TO_BE_REPLACED