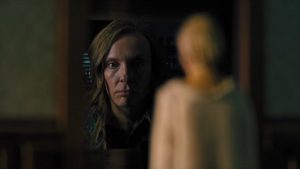 There is a terror to witnessing the nigh-invisible. Cassandra-like, it is only a matter of time before isolation and powerlessness send the witnesses, already deemed crazy by their peers, spiraling toward insanity. A person can only go unheard for so long before they start screaming. And when everyone thinks you’re screaming over nothing…well, we can imagine how that plays out.

In recent years, there’s been a noticeable shift in the amount of attention we pay to less-represented demographics in our media. Audiences are paying more attention to how women, people of color, LGBTQ people, and other underrepresented minorities are treated onscreen and behind the scenes. It seems that filmmakers have begun to respond accordingly, as more and more films concerning and centering such characters begin to trickle into existence. But if practice makes perfect, and if Hollywood has had woefully little practice during its short existence, then issues are inevitable. In themselves, flawed portrayals are not an unforgivable sin; willful ignorance is much more difficult to brush off, especially when it seems that no one else is seeing what you’re seeing, even if you’re pointing right at it.

You’ve picked up on the doublespeak by now. When it comes to portrayals of disability, the dread of the nigh-invisible slips in. If you didn’t have the fortune to have come into the world with the disability built-in, becoming disabled is part and parcel of aging. And yet, considerations of the significance of onscreen disability is often made to feel like screaming over nothing, partially because it seems that ofttimes the only ones who pick up on such details are disabled themselves. And while in recent years the ridicule and accusations of exaggeration have begun to fade, they are not entirely gone. The doubt lingers. Meanwhile, the monster looms large over our shoulders, in our periphery.

All of this to say, I’m proposing a series that trains a disabled lens* on disability in film. My intention isn’t to poke holes or point out “problems” in representation. Any ruining of anyone’s fun is purely accidental. I’d just like to share what the view looks like through my disabled-colored glasses. First in the lineup: Ari Aster’s directorial debut Hereditary (2018).

It takes very little time at all for us to understand that 13-year-old Charlie Graham, played by Milly Shapiro, is an outsider. In fact, “outsider” might even be putting it mildly. No one ever explicitly uses the word “disabled” to explain Charlie’s facial difference, her atypical behavior, and her social isolation, but it’s evident regardless. In a film about familial trauma, Charlie’s alienation bolsters the degree to which she’s set apart from her family, her peers, and from us the audience. In a world made by and for the able-bodied/-minded, to be disabled—to grow up disabled—is to feel divorced from your own body and mind. You are not what the world had in mind, nor will there ever really be a moment where you can pretend that you are. Any and all efforts to meet disabled people’s needs, however necessary and appreciated they may be, take on a connotation of being supplementary, an extra step that no one else has to take. To be disabled is to be instilled with the belief that you are a burden that others must bear.

To be fair, there isn’t much evidence that Charlie’s family treats her with any active malice—Annie’s somewhat rough handling after Charlie refuses to go to Peter’s classmate’s party aside. But the idea of burden-bearing still looms large in the background, and only Charlie can see it. When she takes a bite of a chocolate bar, her father sweeps into the scene to make sure there aren’t nuts in it. “Who’s gonna take care of me?” she asks Annie later that night, after her grandmother’s funeral. As well-meaning as she is, Annie’s response is a dismissal nonetheless: “Uh, excuse me, you don’t think I’m going to take care of you?”

And when Charlie indicates that she’s talking about the long-term (“But when you die”), Annie is caught off-guard by this. There’s no real way to console Charlie; her fears are not only legitimate, but they must be considered an eventuality at some point or other as she grows up. As isolated as Charlie is, she’s still remarkably perceptive. In this scene, she makes it clear that she’s aware that she lives in a world inhospitable to disabled people and that she may be one of those disabled individuals who may need caretaking all their lives. But Annie can’t assuage this fear. She can barely even acknowledge it.

I find this parallel between Annie and Charlie intriguing. Annie’s life resounds with echoes of her mother even after her death. When she tries to communicate her fears to her husband, he dismisses her as unwell. The Graham family trauma rings louder and louder until Ellen’s cult chases the Graham family to its destruction. Charlie’s life is permeated with a fear that no one else seems capable of acknowledging. But unlike Annie’s fears, which ultimately prove true, Charlie’s concerns remain unacknowledged. As a vessel for Paimon, her female, disabled (read: inferior) body is “corrected” in favor of Peter’s. Credits roll. I am left with a lingering, persistent fear. Here I am, trying to point it out to you. 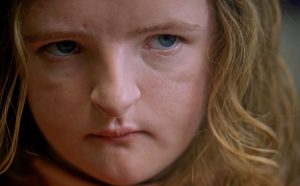 I would be remiss if I failed to mention that Milly Shapiro has a skeletal condition known as cleidocranial dysostosis, which can lead to collarbone and cranium deformities. (Stranger Things’ Gaten Matarazzo has a similar condition, cleidocranial dysplasia.) Since I’m unsure as to whether Shapiro ascribes to “disabled” as a social group or an identity, I’m refraining from referring to her as such. However, Hereditary did make much of her facial features as an indicator of her difference. One would be hard-pressed to deny that viewers aren’t supposed to derive an off-kilter tension from every facet of Charlie’s oddness, her isolation. Shapiro herself made a comment, albeit lightheartedly, about how she was deliberately made to “look [her] worst” in the film. With Shapiro’s own testimony in mind, it becomes somewhat uncomfortable to read pieces that describe Charlie as blank-eyed, “eerie,” and “sinister.” However, this is far from the first time that a dramatic production has utilized physical differences/deformity to connote something evil or other. We can look as far back as Shakespeare’s play Richard III for that. We can look at something as recent as the upcoming Bond film No Time to Die. In the court of public opinion, the conversation around the use of disability as a trope demarcating evil/bad is a long and ongoing. I don’t foresee an end to it anytime soon.

Whether I believe Hereditary is “good” or “bad” representation, I’m hesitant to say—not because I fear backlash to my opinion but because truthfully, I remain on the fence. I prefer not to adhere to such binary and restrictive judgments as “good” and “bad.” I think Hereditary dedicated screen time to an oft-unaddressed concern among disabled people, regardless of whether that was intentional on Aster’s part or not. It communicates a cultural anxiety surrounding disability, the value of a disabled body. When it comes to questions of representation, “good/bad” is a simplistic call that only gets us so far. It resembles racing toward a finish line more than anything else. “How do we get to the right answer so we don’t have to deal with this anymore?” It’s a mindset that cuts meaningful conversation short and thus isn’t conducive to worthwhile art. And hopefully in future conversations about media representation, “worthwhile” becomes the metric we turn to more often.

* I say “a disabled lens” because disabled perspectives, needs, and desires when it comes to media representation are as widely diverse as disability itself. I don’t claim to speak for any disabled person but myself.