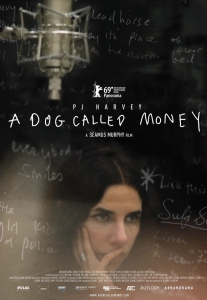 As imaginative as the creative process it documents, A Dog Called Money is a uniquely intimate journey through the inspiration, writing and recording of a PJ Harvey record.

Writer and musician Harvey and award-winning photographer Seamus Murphy sought first-hand experiences of the countries she wanted to write about. Harvey accompanied Murphy on some of his worldwide reporting trips, joining him in Afghanistan, Kosovo and Washington DC. Harvey collected words, Murphy collected images.

Back home, the words became poems, songs and then an album, which was recorded in an unprecedented art experiment in Somerset House, London. In a specially constructed room behind one-way glass, the public – all cameras surrendered — are invited to watch the five-week process as a live sound-sculpture. Murphy exclusively documents the experiment with the same forensic vision and private access as their travels.

By capturing the immediacy of their encounters with the people and places they visited, Murphy shows the humanity at the heart of the work, tracing the sources of the songs, their special metamorphosis into recorded music and ultimately cinema.

“The current trend in music videos is to pump them full of predators, pop sex, and outdated s/m imagery. In contrast, this unheralded piece (directed by Seamus Murphy) is a wisp of humanity celebrating the small things, including the wonderful singer herself” – Patti Smith

LOVE this theater..OMG. I’ve been here several times now for different events. I’ve attended 2 of the 3 Scott Pilgrim events thrown by Cinemattack. I was even the lucky winner of the Scott Pilgrim album on vinyl. I don’t have a record player..but may as well be a trophy for me because I never win anything! lol. I also attended “The Last Unicorn” event with Peter S Beagle- the author speaking and answering a Q and A afterwards. This was so awesome. I have always loved loved this movie and it was … END_OF_DOCUMENT_TOKEN_TO_BE_REPLACED

I love the Frida, as an avid movie watcher, it’s great to have a place to go where many classic, cult and underrated films are shown. I had the pleasure of attending “The Decline of Western Civilization” screening with director Penelope Spheres doing a Q&A. Her films are so historically important and impacted me at a very young age. I am forever grateful for the experience, like nowhere else would this be possible. I think it’s truly amazing what the staff and everyone involved is doing for the … END_OF_DOCUMENT_TOKEN_TO_BE_REPLACED