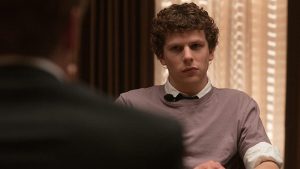 Just like any cinephile, over the quarantine I’ve watched many movies. There is one film, however, that I have been watching more than others–David Fincher’s The Social Network. The film came out in 2010, so at the time Facebook had already achieved major popularity. The film followed Fincher’s Oscar winner The Curious Case of Benjamin Button and starred up-and-coming actor Jesse Eisenberg. It also gave us one of the best director/writer combos of all time–Fincher and Sorkin.

The most fascinating element of this film, for me, is the screenplay. First off, the dialogue that Sorkin crafts for these characters is next level; it’s so quick to the point and sharp. It makes you feel as if every line is just as important as the last. The use of overlapping dialogue throughout the film helps escalate the energy of each scene, making it more enticing for the audience. Sorkin uses many different elements throughout the screenplay, such as giving the characters different trains of thought, which is most apparent in the film’s now famous opening scene.

With Fincher’s directing and Sorkin’s script, their two styles flow so well together. It’s a cinematic tour de force. Not only is the script excellent, but the entire film achieves near perfection, including the beautiful cinematography and the amazing score (which I think is some of the best work Trent Reznor and Atticus Ross have ever done). The word “masterpiece” is such an subjective word, and maybe some people don’t agree, but what Fincher was able to achieve alongside Sorkin is something profound. I know it will stand the test the time.

I love the Frida, as an avid movie watcher, it’s great to have a place to go where many classic, cult and underrated films are shown. I had the pleasure of attending “The Decline of Western Civilization” screening with director Penelope Spheres doing a Q&A. Her films are so historically important and impacted me at a very young age. I am forever grateful for the experience, like nowhere else would this be possible. I think it’s truly amazing what the staff and everyone involved is doing for the … END_OF_DOCUMENT_TOKEN_TO_BE_REPLACED