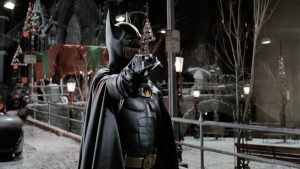 People don’t usually associate the Caped Crusader and Christmastime with each other, but in fact they are more intertwined than you might think. One of the earliest episodes of Batman: The Animated Series, for instance, takes place during Christmas. I guess it’s understandable that most might not make this connection thanks to the seeming incongruity between the Dark Knight and the holiday season, but at least one of the movies actually brings this most unusual relationship to the big screen.

The second installment of Tim Burton’s Batman franchise, Batman Returns is interesting for a number of reasons. It really feels like a Burton movie, with the director’s affinity for Christmas on full display. Most times when we think of “Christmas movies”, we think of films filled with joy, some kind of personal growth and grateful sentimentality: basically, everything that you’d expect to see in a feel-good story. The reason I appreciate Batman Returns as a holiday film so much is because it embodies qualities that are very much the opposite of these.

The film uses all of its darkness and grittiness to subvert the audience’s expectations of the holidays and what they’re supposed to mean. Aside from the opening tree lighting scene, Burton introduces Christmas elements in a very subtle way. White and red colors are a constant presence throughout the film, as seen on the smoke stacks rising from a power plant. Snow is a repeating element in most Christmas movies and that’s one traditional Yuletide quality Burton doesn’t stray away from: we see it in the beginning landscape shots of Gotham City, which we generally don’t see much of. Burton also incorporates elements like a snow globe full of pine trees and a character named “Ice Princess”, which has an obvious wintertime ring to it.

One of my favorite scenes is the aforementioned opening scene. Max Shreck is giving a speech in front of a huge present, vibrantly wrapped in red and green, when the villains pop out of the gift and attack city hall. This scene is so over the top but undeniably Christmas that I love it. On a side note, Shreck is intriguing because, while you may not realize it at first, he can be seen as an evil counterpart to St. Nick. With his long white hair and red bow tie, Schreck is a sleazy Santa fit for Gotham City.

For taking what we expect from Christmastime and turning it on its head, Batman Returns is, on top of being an excellent superhero movie, a most unconventional but no less enjoyable holiday one as well.

What a hidden gem! I had such a lovely time at a recent showing of Godzilla (1954). This theater is a bit timeworn, yet undeniably quaint and charming with an unconventional feel. And interestingly enough, the audience served as the sweet element of surprise. Those in attendance created an atmosphere of delight, comfort, and personal acceptance… and get this.. there was an actual host who presented a brief preface to the film just prior to viewing. Very collegiate, which I loved!  All in all pe… END_OF_DOCUMENT_TOKEN_TO_BE_REPLACED