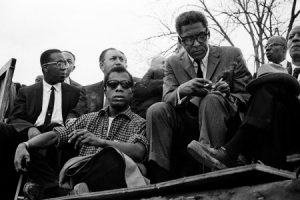 A master of modern American music, music icon Quincy Jones revolutionized contemporary music as a composer, musician, songwriter, arranger, record producer, and film/television producer. His over a 60-year groundbreaking career in entertainment has impacted an array of genres and musicians from Frank Sinatra, to Barbara Strained, and Dr. Dre.

Considered the greatest and most influential stand-up comedian of all time, Richard Pryor revolutionized comedy with his signature no hold bars language and blunt honesty. His comedic genus could be seen through his stand-up specials (Richard Pryor: Live on the Sunset Strip), scriptwriting (Blazing Saddles and Stanford and Sons), and acting (Harlem Nights and Stir Crazy).

When We Were Kings

The Oscar-winning documentary explores one of the most famous heavyweight boxing championship matches of all time, between Muhammad Ali and George Forman, in the 1974 “Rumble in the Jungle”. It also evaluated how African Americans connected during the Black Power Era to the content of Africa culturally and politically.

Commemorating the 50th anniversary of the 1968 Olympics, known as one of the most memorable Olympics of the 20th century, due to the silent protest of the African American track athletes Tommie Smith and John Carlos. While the documentary, narrated by Serena Williams, evaluates the social and political issues surrounding the 68’ Olympics, special attention is paid to the journey of Smith and Carlos to the Olympics and the impact their protest had then and today.

Though lesser known to mainstream American pop culture audiences, behind the curtain of Hollywood, Clarence Avant, aka “The Black Godfather”, is a significantly influential music executive and film producer. Known as a mover and shaker in entertainment, Avant helped shape and promote positive black American culture in entertainment, launching the careers of a vast variety of African American celebrates.

Sing Your Song: The Story of Harry Belafonte

Considered one of the most influential black performers in modern music, Harry Belafonte, the “King of Calypso”, evolved from a successful singer (“Day-O” aka “The Banana Boat Song” and “Jump in the Line (Shake, Senora)”) and actor (Carmen Jones), into an outspoken civil rights activist. Belafonte has spent his life using his celebrity influence to bring to light humanitarian issues both nationally and internationally.

Following the life of the political force and civil rights leader Senator John Lewis of Georgia, in his over 60-year participation of social activism and fight for civil rights. How his strength and bravery became a force challenging the social status quo while impacting American politics.

King of the Wilderness

Among the multitude of films and documentaries about Dr. Martin Luther King Jr., this documentary takes an in-depth look at the last few years of his life. It evaluates the multitude of heart-breaking consequences he faced, including being unethically and illegally targeted by J. Edgar Hoover (the director of the FBI) and the immense backlash for being anti-Vietnam War. Though he suffered, he noted, “I may not get there with you, but I want you to know tonight that we as a people will get to the promise land”.

I Am Not Your Negro

James Baldwin, one of the most significant American authors of the 20th century, wrote the unfinished memoir manuscript of Remember This House, which this documentary is based on. Through a passionately profound observation, Baldwin’s words take viewers into a deeply personal perception of the complexity of African American history and how his words of yesterday connect to today’s #blacklivesmatter movement.

LOVE this theater..OMG. I’ve been here several times now for different events. I’ve attended 2 of the 3 Scott Pilgrim events thrown by Cinemattack. I was even the lucky winner of the Scott Pilgrim album on vinyl. I don’t have a record player..but may as well be a trophy for me because I never win anything! lol. I also attended “The Last Unicorn” event with Peter S Beagle- the author speaking and answering a Q and A afterwards. This was so awesome. I have always loved loved this movie and it was … END_OF_DOCUMENT_TOKEN_TO_BE_REPLACED

I love the Frida, as an avid movie watcher, it’s great to have a place to go where many classic, cult and underrated films are shown. I had the pleasure of attending “The Decline of Western Civilization” screening with director Penelope Spheres doing a Q&A. Her films are so historically important and impacted me at a very young age. I am forever grateful for the experience, like nowhere else would this be possible. I think it’s truly amazing what the staff and everyone involved is doing for the … END_OF_DOCUMENT_TOKEN_TO_BE_REPLACED