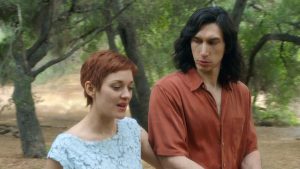 “The stuff I say at the opening comes from Sondheim, which is why I thank him in the credits. He wrote a piece where he talks to the audience and presents the show. Then there was the coincidence where I talk about breathing and telling the audience to hold their breath, which seems appropriate now during COVID times.” – Leos Carax, Indiewire, 2021 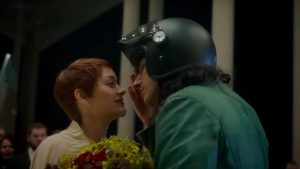 While audiences are instructed not to breathe during Leos Carax’s arresting and palatial new film Annette, his marvelous cast of first time collaborators make exquisite use of their lungs in this all singing, sometimes dancing, musical production of cosmic proportions. Adam Driver and Marion Cotillard play their respective lead roles with breathless stamina, but the true star of the film is in the original music and story by art band Sparks–brothers Ron & Russell Mael–who also appear in the film. For both the director and his fraternal composers, Annette marks the trio’s first entree into the expressionistic and sometimes dusty genre of musicals, but its precise design carries with it the confidence of experience. Subversion of a form by way of acute familiarity with it.

As a musical, Annette shares more in common with the soapy, Technicolor recitals of Jacques Demy than it does with the showman-like choreography of Busby Berkeley. As a film however, it’s singularly Carax, with all the 4th wall breaking and genre blending that designation would imply. The infectious music and lyrics of Sparks featured in the film play like any one of their narrative-inflected albums about defiant, lonely, and suspicious characters seeking purpose. In this case: Ann Defrasnoux (Cotillard) & Henry McHenry (Driver), both successful performing artists operating in vastly different creative solar systems. The same sort of star-crossed romanticism we find in other classic musicals is unironically embraced in this story to a captivating degree.

When not singing for the plot, Ann rhapsodizes to her audiences as an opera singer: she’s world renown and beloved by all. Her much publicized unholy union with shock-comedian Henry McHenry (the self-proclaimed “Ape Of God”) represents a violation of clearly delineated entertainment and artistic stratas, but also a foreshadowing of danger in the context of the couple’s rapid love affair. The lush images of romance are undercut later by even more lush images of decay, as the film advances to its inevitable end. 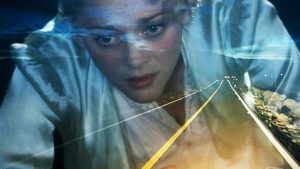 No stranger to the interplay of form and content, Carax literalizes his musical thesis in Annette with a red waveform superimposed across the screen at the very start of his colorful film. It’s a majestic establishing shot that announces the bold visual style of this film, while also elegantly underscoring the use of sound as a form of cinematic doubling. How image and sound, specifically music, can intersect and combine to add unseen dimension to a given moment. In the liminal spaces of theater venues, recording studios, and highway tunnels Carax externalizes his character’s conflicted attitudes through operatic soliloquies baked within a musical number that’s baked within a supposedly unrelated onstage performance. The question of whether a song is part of the character’s “act”, or whether it’s for us, the audience, is one the film’s most stimulating and haunting qualities.

Indeed, Annette is a film teeming with ghosts, both real and imagined.In stark double exposures that emphasize colliding realities, the film often adopts the cinematic language of horror and suspense to tell its pulpy tale of love and betrayal in Los Angeles. With key scenes shot on location, the film begets the same haunted atmosphere that pervades the city itself. Stories of young stars disappearing overboard, acquitted husbands, and crimes of passion underscore the noirish depravity endemic to the system of show business. Annette invokes these elements as a matter of theme–the entropy of performance–but also as a means to allegorize the seedy urban history of Los Angeles, a history quite familiar to writers and Pacific Palisades natives Ron & Russell Mael. 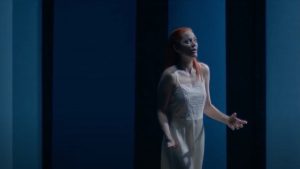 The operatic and vulnerable depictions of Ann’s ovation-worthy arias at the Disney Concert Hall are captured with the same grace as Henry’s panned monologues on the Vegas Strip. This dichotomy of venue and performance, a product of the Mael’s lifetime spent touring internationally (“WE’RE TRAVELLING AROUND THE WORLD!”), situates our lovers as opponents on the spectrum of high and low brow art, but eventually too as competitors for spotlight and stages. As the old saying goes, “This town ain’t big enough for the both of us…and it ain’t me who’s gonna leave!”

All this rich storytelling goes without even mentioning the miracle child of Ann and Henry, the film’s own wonder girl, Annette. Newcomer Devyn McDowell’s revelatory and out-of-this-world appearance in the film elevates this story of generational tragedy more so than any of her adult counterparts. Yet, all the performances from this small ensemble lend immeasurable weight to the stunning musical sequences that punctuate this imaginative, and often touching film about the cost of talent.

With an achievement like Annette, Leos Carax and Sparks prove without a doubt, that collaborations, even after 8 years, finally DO work. 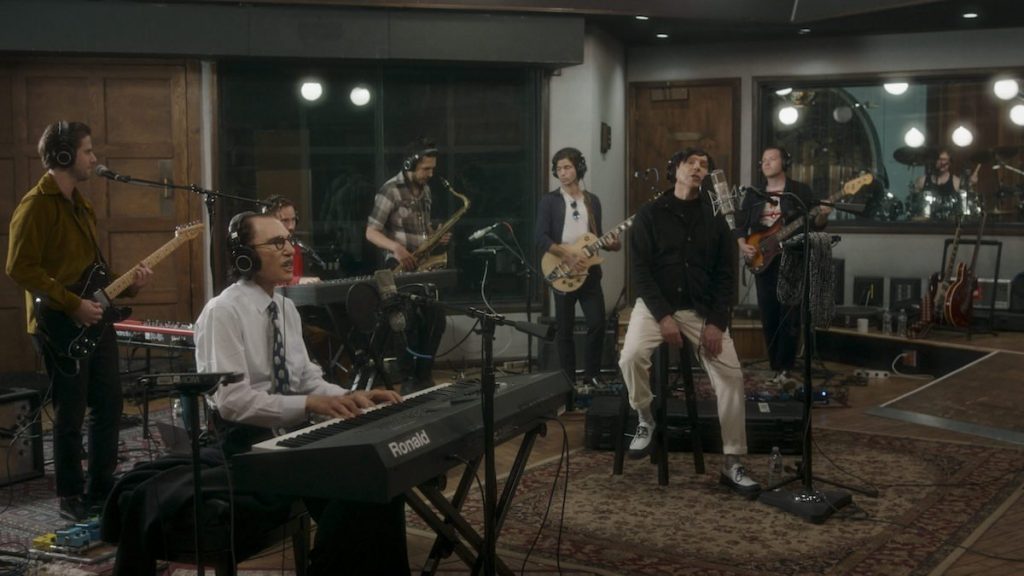 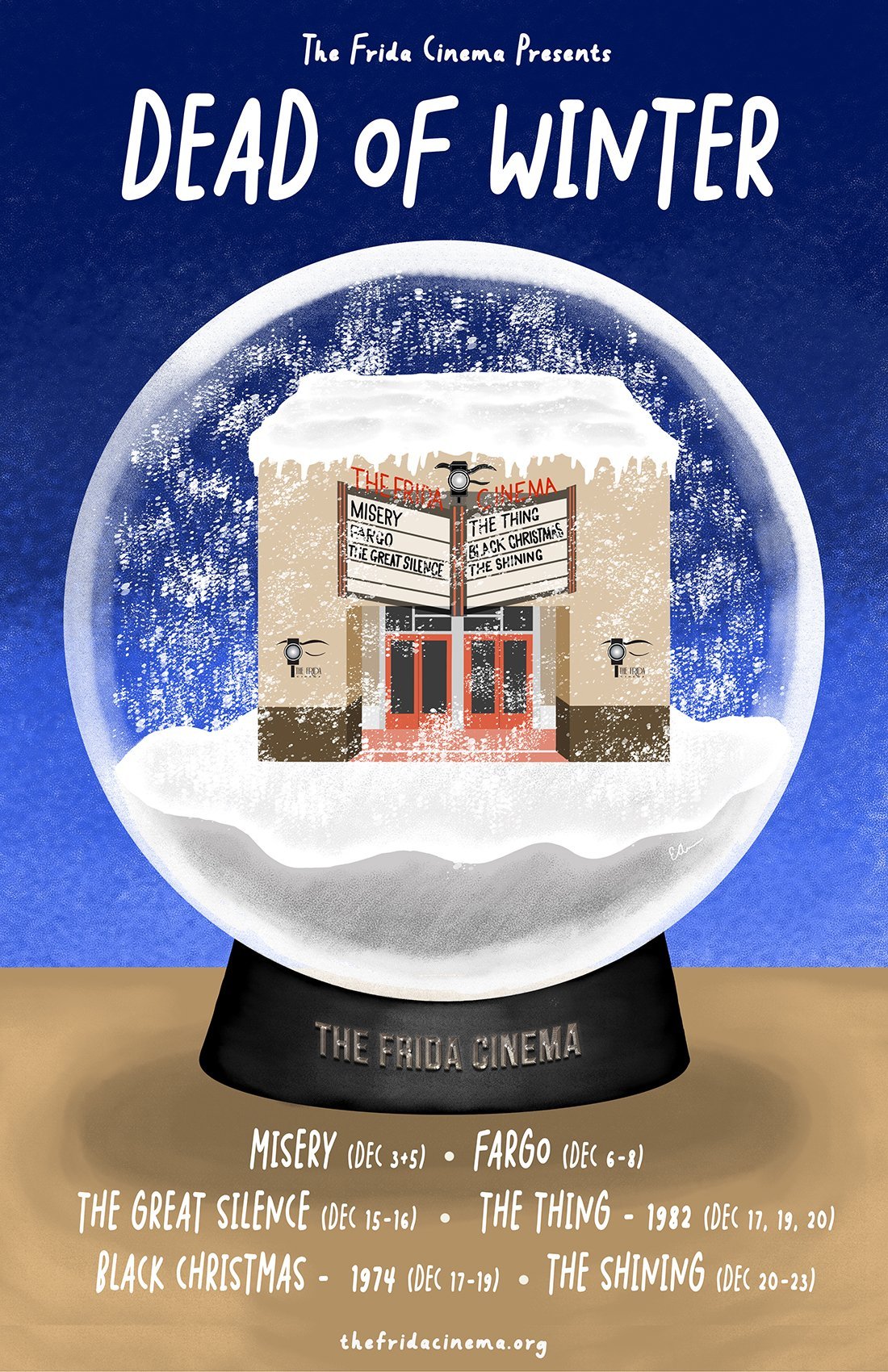 LOVE this theater..OMG. I’ve been here several times now for different events. I’ve attended 2 of the 3 Scott Pilgrim events thrown by Cinemattack. I was even the lucky winner of the Scott Pilgrim album on vinyl. I don’t have a record player..but may as well be a trophy for me because I never win anything! lol. I also attended “The Last Unicorn” event with Peter S Beagle- the author speaking and answering a Q and A afterwards. This was so awesome. I have always loved loved this movie and it was … END_OF_DOCUMENT_TOKEN_TO_BE_REPLACED