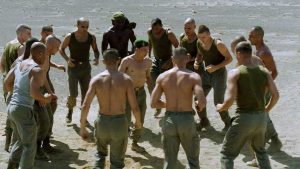 With her ravishingly sensual take on Herman Melville’s Billy Budd, Sailor, Claire Denis firmly established herself as one of the great visual tone poets of our time. Amid the azure waters and sunbaked desert landscapes of Djibouti, a French Foreign Legion sergeant (Denis Lavant) sows the seeds of his own ruin as his obsession with a striking young recruit (Grégoire Colin) plays out to the thunderous, operatic strains of Benjamin Britten. Denis and cinematographer Agnès Godard fold military and masculine codes of honor, colonialism’s legacy, destructive jealousy, and repressed desire into shimmering, hypnotic images that ultimately explode in one of the most startling and unforgettable endings in all of modern cinema.

What a hidden gem! I had such a lovely time at a recent showing of Godzilla (1954). This theater is a bit timeworn, yet undeniably quaint and charming with an unconventional feel. And interestingly enough, the audience served as the sweet element of surprise. Those in attendance created an atmosphere of delight, comfort, and personal acceptance… and get this.. there was an actual host who presented a brief preface to the film just prior to viewing. Very collegiate, which I loved!  All in all pe… END_OF_DOCUMENT_TOKEN_TO_BE_REPLACED

LOVE this theater..OMG. I’ve been here several times now for different events. I’ve attended 2 of the 3 Scott Pilgrim events thrown by Cinemattack. I was even the lucky winner of the Scott Pilgrim album on vinyl. I don’t have a record player..but may as well be a trophy for me because I never win anything! lol. I also attended “The Last Unicorn” event with Peter S Beagle- the author speaking and answering a Q and A afterwards. This was so awesome. I have always loved loved this movie and it was … END_OF_DOCUMENT_TOKEN_TO_BE_REPLACED