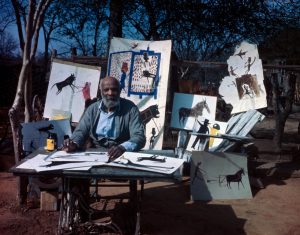 This illuminating documentary explores the life of a unique American artist, a man with a remarkable and unlikely biography. Bill Traylor was born into slavery in 1853 on a cotton plantation in rural Alabama. After the Civil War, Traylor continued to farm the land as a sharecropper until the late 1920s. Aging and alone, he moved to Montgomery and worked odd jobs in the thriving segregated black neighborhood. A decade later, in his late 80s, Traylor became homeless and started to draw and paint, both memories from plantation days and scenes of a radically changing urban culture.

Having witnessed profound social and political change during a life spanning slavery, Reconstruction, Jim Crow segregation, and the Great Migration, Traylor devised his own visual language to translate an oral culture into something original, powerful, and culturally rooted. He made well over a thousand drawings and paintings between 1939-1942. This colorful, strikingly modernist work eventually led him to be recognized as one of America’s greatest self-taught artists and the subject of a Smithsonian retrospective.

Using historical and cultural context, BILL TRAYLOR: CHASING GHOSTS brings the spirit and mystery of Traylor’s incomparable art to life. Making dramatic and surprising use of tap dance and evocative period music, the film balances archival photographs and footage, insightful perspectives from his descendents, and Traylor’s striking drawings and paintings to reveal one of America’s most prominent artists to a wide audience.

I love the Frida, as an avid movie watcher, it’s great to have a place to go where many classic, cult and underrated films are shown. I had the pleasure of attending “The Decline of Western Civilization” screening with director Penelope Spheres doing a Q&A. Her films are so historically important and impacted me at a very young age. I am forever grateful for the experience, like nowhere else would this be possible. I think it’s truly amazing what the staff and everyone involved is doing for the … END_OF_DOCUMENT_TOKEN_TO_BE_REPLACED

What a hidden gem! I had such a lovely time at a recent showing of Godzilla (1954). This theater is a bit timeworn, yet undeniably quaint and charming with an unconventional feel. And interestingly enough, the audience served as the sweet element of surprise. Those in attendance created an atmosphere of delight, comfort, and personal acceptance… and get this.. there was an actual host who presented a brief preface to the film just prior to viewing. Very collegiate, which I loved!  All in all pe… END_OF_DOCUMENT_TOKEN_TO_BE_REPLACED

LOVE this theater..OMG. I’ve been here several times now for different events. I’ve attended 2 of the 3 Scott Pilgrim events thrown by Cinemattack. I was even the lucky winner of the Scott Pilgrim album on vinyl. I don’t have a record player..but may as well be a trophy for me because I never win anything! lol. I also attended “The Last Unicorn” event with Peter S Beagle- the author speaking and answering a Q and A afterwards. This was so awesome. I have always loved loved this movie and it was … END_OF_DOCUMENT_TOKEN_TO_BE_REPLACED