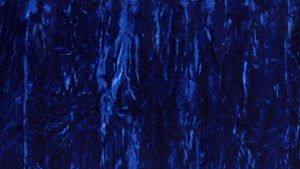 Since its release in 1986, much has been written about Blue Velvet’s depictions of sexual abuse, blend of irony and sincerity, Freudian themes, and portrayal of darkness that lies at the heart of American suburbia. The film is full of references and imagery that invite interpretation and speculation—Dorothy Vallens is an allusion to The Wizard of Oz; Sandy talks about a cleansing vision of light while framed by stained glass windows; Jeffrey Beaumont is an alter ego for David Lynch himself; and on and on in a claustrophobic spiral of meaning. But every time I watch Blue Velvet, I always find myself rejecting thematic explanations and focusing instead on the visceral qualities of the film and how it disorders sight, sound, and touch in ways that defy rational explanation.

The film announces this ambition from the start. The song ‘Blue Velvet’ plays over the opening credits, beginning with lines that are written in synesthetic metaphors—“She wore blue velvet/Bluer than velvet was the night/Softer than satin was the light/From the stars.” In the lyrics, the touch of velvet turns into color, and the quality of light becomes the feel of satin. Meanwhile a crushed blue velvet curtain waves slowly in the background as if it is breathing, suggesting a woozy romanticism that sets the tone for the shadowy fantasy world that will reveals itself in Jeffrey’s hometown.

As Jeffrey begins his investigation, the senses are first presented separately: the ear, which is discovered cut off in a field, and the eye, which watches from inside Dorothy’s closet when Jeffrey holds his stakeout. But as Jeffrey discovers more secrets, the senses begin to blur in moments of heightened emotion and tension. When Frank Booth sheds a tear at the nightclub, he watches Dorothy on stage, listens to her sing, and clutches a strip of velvet from her robe, the three senses joining into one ecstatic moment. It also happens later when Jeffrey is dragged to Frank’s party and watches Ben lip-singing to ‘In Dreams.’ It’s only clear after Ben has stopped moving his lips while the recording continues to play that he isn’t actually singing, but for a split-second I almost believed that Ben continues to sing even though the image on screen says otherwise.

These are the sorts of moments that create the most lasting images in the film for me, like the scene of Dorothy singing at the nightclub. As Dorothy sings the opening lines “she wore blue velvet” onstage, the spotlight clothes her in blue light as if her voice has summoned it. Maybe the moment is too obvious, but David Lynch is going for maximum effect. To me, this confusion of sense is an argument against too much interpretation, to prefer the pure experience of the film over some sort of retroactive explanation. The disruption and merging of sensation is what makes the underbelly of Lumberton so perverse but also so enduring. It creates a world where desire can produce real flames or people disappear in an instant. To be sensorially disorientated is a familiar feeling, so the fantasy feels both alien and familiar at the same time.

What a hidden gem! I had such a lovely time at a recent showing of Godzilla (1954). This theater is a bit timeworn, yet undeniably quaint and charming with an unconventional feel. And interestingly enough, the audience served as the sweet element of surprise. Those in attendance created an atmosphere of delight, comfort, and personal acceptance… and get this.. there was an actual host who presented a brief preface to the film just prior to viewing. Very collegiate, which I loved!  All in all pe… END_OF_DOCUMENT_TOKEN_TO_BE_REPLACED