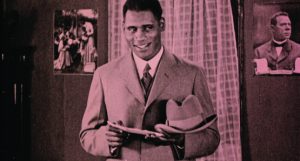 Just as he was forging a career for himself on Broadway (in Eugene O’Neill’s All God’s Chillun Got Wings and The Emperor Jones), Paul Robeson appeared in this film by the enterprising Oscar Micheaux. No other film in the director’s career so vividly represented his cynical view of clergymen as greedy manipulators of the vulnerable. Robeson stars as twin brothers, one a Bible-thumping, alcohol-sipping, sexually-predatory minister and the other an ordinary working man, both vying for the affection of a young woman who is trying to abide by the misguided wishes of her devout mother.

LOVE this theater..OMG. I’ve been here several times now for different events. I’ve attended 2 of the 3 Scott Pilgrim events thrown by Cinemattack. I was even the lucky winner of the Scott Pilgrim album on vinyl. I don’t have a record player..but may as well be a trophy for me because I never win anything! lol. I also attended “The Last Unicorn” event with Peter S Beagle- the author speaking and answering a Q and A afterwards. This was so awesome. I have always loved loved this movie and it was … END_OF_DOCUMENT_TOKEN_TO_BE_REPLACED