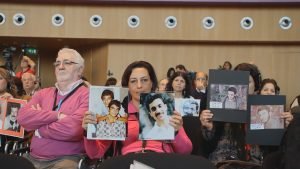 In her directing debut, German-Iranian actress Maryam Zaree confronts the circumstances of her birth inside one of the world’s most notorious prisons. Her parents, political opponents to Iran’s leader Ayatollah Khomeini, spent years in prison, and then managed to find asylum in Germany. But they never talked about their persecution and imprisonment, so Zaree turns to other survivors of Evin, talks to experts, and searches for children born in the same prison. What are the personal consequences of persecution and violence when the same perpetrators remain in power while the victims internalize their stories? And what does it mean, politically, to face the silence within the family?

LOVE this theater..OMG. I’ve been here several times now for different events. I’ve attended 2 of the 3 Scott Pilgrim events thrown by Cinemattack. I was even the lucky winner of the Scott Pilgrim album on vinyl. I don’t have a record player..but may as well be a trophy for me because I never win anything! lol. I also attended “The Last Unicorn” event with Peter S Beagle- the author speaking and answering a Q and A afterwards. This was so awesome. I have always loved loved this movie and it was … END_OF_DOCUMENT_TOKEN_TO_BE_REPLACED