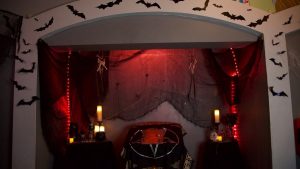 Triple, triple popcorn butter dripple,
Silver Shamrock gleam and ripple.
One rec room, a graveyard too
Camp Frida brought one eve to thee,
By the power of three times three,
Threequels, witches, and Halloween fright.
Were you able to survive the night?

Your favorite spooky-filled, twelve hour movie marathon has done it again! Thanks to our campers, counselors, staff, and volunteers, Camp Frida: The Season of the Witch was the biggest and best campout yet!

In honor of Camp Frida’s third year, there were three themes within the night. So along with anything surrounding the occult, any film taking place on Halloween night or the third installment in a film series was fair game. We saw witches of all ages and shapes, films with whimsical and comedic tones, and threequels from a variety of horror-filled franchises that made it a magical time for everyone.

Of course, Camp Frida is far from just the surprise screenings. The Frida was transformed into a delightfully dreadful campground, complete with Jack-O-Lanterns, bats in flight, weathered tombstones, and even a witchy display of Sanderson Sisters’ infamous Book of Spells (photo op included). Along with their own rations, pizza and cocktail-filled blood bags—with a BAC off the charts—were available for a special treat to really get comfortable for a long night in those onesies.

Our hosts this year were not zombified campers, but instead the very alive Jonathan and Tyler of Bombs Away fame. They too had to survive the night, and did so with the appropriate vintage short-shorts, costume changes, and proud sponsorship by Silver Shamrock Novelties (with no affiliation whatsoever to the one you’re thinking of, thank you very much).

More campers than ever stayed through the night this year, each leaving with a little charm to protect them until they come back next year.

See you then, Campers!

All photos by Ree Han

What a hidden gem! I had such a lovely time at a recent showing of Godzilla (1954). This theater is a bit timeworn, yet undeniably quaint and charming with an unconventional feel. And interestingly enough, the audience served as the sweet element of surprise. Those in attendance created an atmosphere of delight, comfort, and personal acceptance… and get this.. there was an actual host who presented a brief preface to the film just prior to viewing. Very collegiate, which I loved!  All in all pe… END_OF_DOCUMENT_TOKEN_TO_BE_REPLACED

LOVE this theater..OMG. I’ve been here several times now for different events. I’ve attended 2 of the 3 Scott Pilgrim events thrown by Cinemattack. I was even the lucky winner of the Scott Pilgrim album on vinyl. I don’t have a record player..but may as well be a trophy for me because I never win anything! lol. I also attended “The Last Unicorn” event with Peter S Beagle- the author speaking and answering a Q and A afterwards. This was so awesome. I have always loved loved this movie and it was … END_OF_DOCUMENT_TOKEN_TO_BE_REPLACED