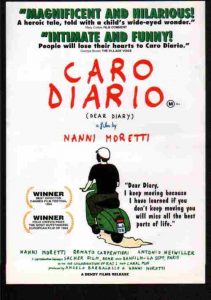 Nanni Moretti recounts three entries from his “diary,” following the filmmaker’s musing on cinema atop a Vespa, a trip to the Aeolian Islands to work on his new screenplay, and his search for health and wellness after breaking out in a nagging skin rash.

Caro Diario competed for the Palme d’Or at the 1994 Cannes Film Festival, where Moretti won the award for Best Director.

Link to purchase tickets to stream this film in our Virtual Cinema will be available from Friday, June 5th (Thursday at Midnight) until Thursday, June 18th. To purchase and stream, click the button below!

A portion of every ticket purchased goes directly towards supporting Orange County’s only nonprofit Art-house theater. Tickets for Caro Diario are $12!

“It’s a masterwork by a modern movie man, for whom images have effaced the boundary between life and art.” — Richard Brody, The New Yorker

“With a seductive rhythm, the film alternates between wry encounters and lovely restful interludes, the latter presented so soothingly that they create a contemplative mood.” — Janet Maslin, The New York Times

What a hidden gem! I had such a lovely time at a recent showing of Godzilla (1954). This theater is a bit timeworn, yet undeniably quaint and charming with an unconventional feel. And interestingly enough, the audience served as the sweet element of surprise. Those in attendance created an atmosphere of delight, comfort, and personal acceptance… and get this.. there was an actual host who presented a brief preface to the film just prior to viewing. Very collegiate, which I loved!  All in all pe… END_OF_DOCUMENT_TOKEN_TO_BE_REPLACED

LOVE this theater..OMG. I’ve been here several times now for different events. I’ve attended 2 of the 3 Scott Pilgrim events thrown by Cinemattack. I was even the lucky winner of the Scott Pilgrim album on vinyl. I don’t have a record player..but may as well be a trophy for me because I never win anything! lol. I also attended “The Last Unicorn” event with Peter S Beagle- the author speaking and answering a Q and A afterwards. This was so awesome. I have always loved loved this movie and it was … END_OF_DOCUMENT_TOKEN_TO_BE_REPLACED