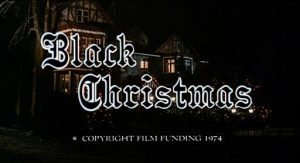 In the 46 years since its release, Bob Clark’s Black Christmas continues to conjure up nightmares and make skin crawl in moviegoers. If it doesn’t, as the tagline goes, your skin is “on too tight…”

What sets this horror staple from the slew of slasher films that it inspired are the well-defined characters.  Although the narrative takes place in a sorority house over the Christmas holiday, each young woman stands out with their own personality quirks and set of problems. Two of the most convincing portrayals are those by Margo Kidder and Olivia Hussey. Kidder’s Barb is a foul-mouthed alcoholic—see her hilarious exchange in the police station and the uncomfortable conversation she starts at dinner later. Hussey’s Jess, on the other hand, is strong willed and holds her own when her boyfriend Peter (Keir Dullea) rages when she says she wants to abort their child. The film is populated with other interesting characters, including the duplicitous housemother Mrs. Mac (Marian Waldman) who hides bottles of booze around the house, the airheaded Sergeant Nash (Douglas McGrath), and the focused Lieutenant Fuller (John Saxon).

The audience’s emotional connection to these characters make the murder sequences more shocking. When the unseen killer sets his eyes on Claire Harrison (Lynne Griffin), who is packing to go on a trip home for the holidays, the onslaught of violence feels ripped from the plot of an Italian giallo film. Claire is suffocated with a plastic garment bag. The disorientating camera movement shows the act from both the killer and Claire’s perspective. After she is killed, the murderer hides her body in the attic.

When Claire’s father (James Edmond) arrives the next day to pick her up, the audience cannot help but feel sympathy for him. Not only is he confronted with the fact that his daughter is missing, but also with the fact that the daughter may have been living a lifestyle while on campus that is antithetical of the traditionally conservative upbringing she received at home. As he tells Mrs. Mac, “I didn’t send my daughter here to be drinking and picking up boys.”

Also interesting is the trajectory of Margo Kidder and Olivia Hussey’s acting careers at this point. Kidder had recently garnered acclaim and controversy for her role in Brian DePalma’s psychological thriller/horror film Sisters (1972) before taking on the role of Barb in Black Christmas. She wouldn’t receive mainstream recognition until her roles in Superman (1975), The Amityville Horror (1979), and other films would catapult her into stardom. Hussey, on the other hand, had achieved early acclaim at the tender age of seventeen because of her Golden Globe-winning performance in Franco Zeffirelli’s Romeo & Juliet (1968). Even though Black Christmas can be construed by some critics as standard horror fare, both Kidder and Hussey deliver strong performances that are a far cry from their previous work. In fact, Kidder won a Canadian Film Award for Best Actress for her role in Black Christmas.

While Jess manages to survive as a “Final Girl,” the other sorority members aren’t as lucky—particularly Barb. Her death comprises of one of the most visually and diegetically stunning sequences in the film. As Jess answers the door to reveal a group of carolers, the killer sneaks into Barb’s room. The killer grabs a crystal unicorn figure and stabs her repeatedly with its pointed horn. The act is captured in slow motion, the visuals distorted as the camera lenses the scene through the other glass figures on her nightstand. The relatively bloodless murder intercuts with the carolers outside as they sing “Silent Night.” Extreme closeups of their faces and open mouths, along with medium shots of Jess at the door bathed in the red glow of Christmas lights, create a mirror of the attack upstairs. The choristers proclaim the sacred birth of Jesus Christ in the lyrics through the beauty of their prepubescent voices, while upstairs an unholy act of menace occurs. The red blooming lights changes into the specks of crimson that flash before the screen as Barb’s hands knocks over other crystal figures. With each downward stroke, the unicorn horn reflects the blood forming on Barb’s body offscreen. As Jess claps at the end of the performance, Barb’s hand goes limp upstairs.

The sequence, through its indelible editing, becomes one of the most shocking montages ever seen in cinema. It elicits a perverse sense of attraction (and horror) to the violence in viewers, while also forcing them to reconcile the blasphemy of witnessing a Christian carol underscore such an act of depravity. This clashing of the sacred and the profane arguably propels the scene into the category of art; It not only causes the viewers emotionally react, but also conjures up a myriad of interpretations on how to view the scene. Because of this, the scene is chillingly effective.

While Black Christmas contains other memorable death scenes—many occurring offscreen in order to heighten the viewer’s imagination—Barb’s death remains the standout sequence in the film. Because the script takes the time to introduce viewers to these characters, their deaths hit harder. In Barb’s case, she earns sympathy. Yes, she’s brash and promiscuous to a certain extent; but take away the alcohol and see through the defenses she puts up, and you’ll find a person aching for connection. She’s not a bad person. And she definitely did not deserve the death fate dealt her. None of these girls did. Unfortunately, the killer’s identity and motive remain ambiguous. Perhaps knowing these particulars would provide better closure for the audience. But a sense of reality permeates the horror in the film, and the reasons for each of the deaths dissipate just as leads in unsolved true-crime cases go cold.

With all its mystery and horror, Black Christmas continues to frighten new generations of fans. A 24-hour marathon of Bob Clark’s A Christmas Story may be the safer option, but Black Christmas remains his more engaging film. And if you’re like me, it’ll be a film you return to every winter season.

What a hidden gem! I had such a lovely time at a recent showing of Godzilla (1954). This theater is a bit timeworn, yet undeniably quaint and charming with an unconventional feel. And interestingly enough, the audience served as the sweet element of surprise. Those in attendance created an atmosphere of delight, comfort, and personal acceptance… and get this.. there was an actual host who presented a brief preface to the film just prior to viewing. Very collegiate, which I loved!  All in all pe… END_OF_DOCUMENT_TOKEN_TO_BE_REPLACED