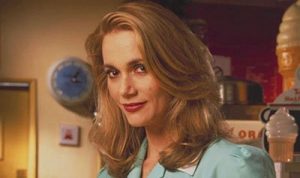 On May 17th at 4pm, 7pm, and 10pm, The Frida Cinema celebrates the great Peggy Lipton with special screenings of David Lynch’s Twin Peaks: Fire Walk With Me.

She may only make one brief appearance in Lynch’s 1992 feature film continuation of the hit TV show, but it wouldn’t be Twin Peaks without Lipton’s iconic character Norma Jennings, owner of the Double R Diner – and arguably, the soul of the Pacific Northwest town.  In Twin Peaks Fire Walk With Me, writer-directed David Lynch and co-screenwriter Bob Engels reunited to provide rich new material for the show’s eager fans, while revisiting the alternately dark and quirky characters of the surreal series. Serving as a prequel to the original television drama, Twin Peaks Fire Walk With Me focuses on the last seven days in the life of homecoming queen Laura Palmer, as well as an investigation into the murder of Teresa Banks.

Originally met with hostile reaction from critics for both its nightmarish brutality and labyrinthine narrative, Twin Peaks Fire Walk With Me has grown into a cult hit. In recent years, critics have reexamined the film and have praised the film’s bleak and hallucinogenic atmosphere, with some going as far as to call it a masterpiece.  Complemented by 2017’s Showtime revival, which also featured the return of Lipton as Norma, Twin Peaks: Fire Walk With Me is a veritable must-see for the fans of the series, as it singularly contains many of the keys necessary to unlock the secrets of Lynch’s mysterious, metaphysical Twin Peaks universe.

Peggy Lipton
August 30, 1946 – May 11, 2019
Born Margaret Ann Lipton, Peggy Lipton was an American actress, model, and singer. She first achieved fame as flower child Julie Barnes in the counterculture series The Mod Squad (1968–1973) for which she won the Golden Globe Award for Best Actress. Her role as Norma Jennings in Twin Peaks made Lipton a cult icon, highlighting a fifty-year career in television, film, and stage. Lipton was formerly married to the musician and producer Quincy Jones, and was the mother of their two daughters, actresses Rashida Jones and Kidada Jones.

I love the Frida, as an avid movie watcher, it’s great to have a place to go where many classic, cult and underrated films are shown. I had the pleasure of attending “The Decline of Western Civilization” screening with director Penelope Spheres doing a Q&A. Her films are so historically important and impacted me at a very young age. I am forever grateful for the experience, like nowhere else would this be possible. I think it’s truly amazing what the staff and everyone involved is doing for the … END_OF_DOCUMENT_TOKEN_TO_BE_REPLACED