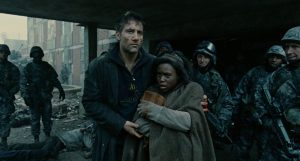 Alfonso Cuaron’s Children of Men has a unique place in the science-fiction genre, taking many common tropes from the Dystopian subgenre. These include themes of the fear of the unfamiliar, impending worldwide destruction, and fighting against an oppressive government. However, instead of fully conforming to a generic Science-Fiction clone, this film subverts many other classic themes. Things like a heroic rebellion, an insubordinate hero, and distinct lines of good versus evil are set up only to be subverted as the film progresses. Leaving Children of Men in a highly unusual place.

The Purpose Of Science-Fiction

The Science-Fiction genre plays a large role in the presentation of Children Of Men. While there are some fairly universal themes within this genre, many of these elements are based on modern fears or crises. It can be argued that the Science-Fiction genre as a whole is heavily influenced by society’s current fears. This is seen in the presentation of civil rights concerns in 1968’s Planet of the Apes, a timely deconstruction of what it means to be human and what rights are afforded to humanity.

Another example would be 1983’s WarGames, a film that is directly inspired by the ongoing Cold War and raises questions about the role of Artificial Intelligence in war. Even more recently, 2012’s Avatar delves into themes of climate change, deforestation, and colonialism during a time of global warming fears and large-scale resource wars. Sci-Fi is constantly harnessing global fears to create an interesting story.

Beyond these timely cultural influences, sci-fi has one large interconnected theme, the fear of change. Science-Fiction takes complex ideas and makes them more easily understood. Most stories within the genre are built around the characters, and, by extension, the audience getting attacked by something unfamiliar and frightening. However, the typical outcome of victory makes those unfamiliar things more understandable and less threatening to the viewer, who can then more readily accept them as they are presented in the real world.

Science-Fiction then becomes an almost educational genre, teaching people not to be scared of these immense topics, much like Sesame Street teaches kids to not be scared of the dark. 2018’s Ready Player One is a contained and simple example of this. The story follows a boy who adventures in a world presented to him by a virtual reality headset. This film almost acts as a commercial for virtual reality right as the software becomes widely available. Granted it is not possible at the scale seen in the film, but it still serves to ease any fears about the technology and create public interest.

Children Of Men utilizes many of these themes common to the Science-Fiction genre. With a 2006 release date, the political landscape of its day plays a large role in how its story is presented. Coming out right after the beginning of the war of terror and in the face of an overwhelming national sense of Xenophobia. Consequently, the tale of a national crisis and fear of immigrants within the context of the film comes across as timely, and, unfortunately, continues to be relevant. The film allows the viewers to play out their deepest fears, and see a hopeful conclusion.

The government in Children of Men mirrors our current situation: instead of looking for more reasonable means of containment or compromise, the first response is sealing the border and shipping the immigrants away. By doing this, the film sets up a scenario that many frightened viewers might wish for.

In the wake of such horrific acts of terror, as seen in the early 2000s, many people no doubt wished their own government would take similar action, however, by the end, as the audience begins to sympathize with the plight of Theo and Kee, the real-world plights of immigrants seems more reasonable. Moreover, the iconography of this film plays into the notion of total authoritarian control being scarier than the people who it prevents. The mixture of advanced and current weaponry sets the film’s timeline closer to present, while also echoing historical tragedies.

The scene where Miriam is taken from the group on the bus is a perfect example. Outside rows of people are seen either in cages, being executed, or being disposed of. The combination of old-fashioned ideals and objects, cages and public executions, clash with the modern devices and society using them. Furthermore, instead of pitting mankind against some distinct different groups, as seen in many of Children of Men’s Sci-Fi brothers, it instead pits mankind against itself. It becomes a commentary on classism and the rights of humanity. The film takes recognizable injustices and sets them casually throughout the background of the first half. Subconsciously setting up a war between classes and the not-so-subtle racism involved. The audience is then forced to question how their own prejudices might be subtlety influencing their treatment of others.

Overall, Cuaron has crafted a masterpiece that causes the audience to question their own biases, while also easing their fears in the climate of the day. The presentation of immigrant Kee as a hero flies in the face of the common Xenophobia at the time and presents the people group as more human. The sympathies elicited help guide conversation and educate against bigotry. All in all, the way traditional genre themes are simultaneously exploited, subverted, and avoided make Children Of Men an altogether unique film in its category.

I love the Frida, as an avid movie watcher, it’s great to have a place to go where many classic, cult and underrated films are shown. I had the pleasure of attending “The Decline of Western Civilization” screening with director Penelope Spheres doing a Q&A. Her films are so historically important and impacted me at a very young age. I am forever grateful for the experience, like nowhere else would this be possible. I think it’s truly amazing what the staff and everyone involved is doing for the … END_OF_DOCUMENT_TOKEN_TO_BE_REPLACED

What a hidden gem! I had such a lovely time at a recent showing of Godzilla (1954). This theater is a bit timeworn, yet undeniably quaint and charming with an unconventional feel. And interestingly enough, the audience served as the sweet element of surprise. Those in attendance created an atmosphere of delight, comfort, and personal acceptance… and get this.. there was an actual host who presented a brief preface to the film just prior to viewing. Very collegiate, which I loved!  All in all pe… END_OF_DOCUMENT_TOKEN_TO_BE_REPLACED

LOVE this theater..OMG. I’ve been here several times now for different events. I’ve attended 2 of the 3 Scott Pilgrim events thrown by Cinemattack. I was even the lucky winner of the Scott Pilgrim album on vinyl. I don’t have a record player..but may as well be a trophy for me because I never win anything! lol. I also attended “The Last Unicorn” event with Peter S Beagle- the author speaking and answering a Q and A afterwards. This was so awesome. I have always loved loved this movie and it was … END_OF_DOCUMENT_TOKEN_TO_BE_REPLACED