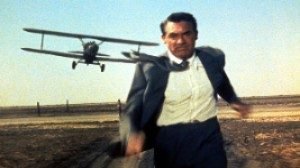 This week we have a guest blog from Frida volunteer Nick Dato!

Director Alfred Hitchcock’s films are the most widely cited in all of cinema–Rear Window, Vertigo, The Birds, and of course Psycho, are all seen as massive milestones in film history, with many filmmakers mentioning them as significant influences on their work. I have seen countless films by Hitchcock, but my favorite has to be 1959’s North By Northwest.

North by Northwest follows an innocent New York City ad executive who is being chased by agents from a mysterious organization after he is mistaken to be an informant for the United States government.

North By Northwest includes every aspect of Hitchcock’s iconic directing style–the director’s cameo appearance, a blonde female lead, a MacGuffin, and a charismatic villain are all present here. The inclusion of all these hallmarks is no accident, with screenwriter Ernest Lehman stating that he intended for North By Northwest to be “the Hitchcock picture to end all Hitchcock pictures.”

Hitchcock’s trademarks are found behind the camera as well in North by Northwest. Some of his most frequent collaborators worked on this film, including graphic designer Saul Bass, editor George Tomasini, and composer Bernard Hermann, whose score takes the climactic finale at Mount Rushmore to new heights.

Cary Grant, Eva Marie Saint, and James Mason also give some of the best performances ever put on screen in the film. Grant is brimming with charisma as ad-man Roger Thornhill. His performance is grounded, making Roger relatable in every way. In classic Hitchcock fashion, North By Northwest also has a charming villain–that of Phillip Vandamm played by James Mason. Mason relishes his role as Vandamm; there is a sense of class with how he delivers every wicked word that his character utters. And finally we have Academy Award-winner Eva Marie Saint as femme fatale Eve Kendall. Saint is flawless as Kendell; she is alluring, funny, conflicted. Her situation garners much sympathy from the audience, specifically, in the art auction scene where Thornhill tells her off. Saint’s reaction to his speech is heartbreaking and makes Roger’s revelation about her character all the more impactful.

To conclude, I think Alfred Hitchcock’s North By Northwest is a perfect film. With Grant, Saint, and Mason each giving stellar performances, mixing romance, action, comedy, and Hitchcock’s specialty suspense, the movie truly does showcase Hitchcock’s skill as both a director and storyteller. With every thrilling sequence elevated by Bernard Hermann’s bombastic score. North by Northwest is a massive influence on classic action/espionage series like James Bond or my personal favorite–Mission: Impossible. While by today’s standards, the films seen as a bit tame in comparison to those, it’s still a remarkable picture that remains as one of Hitchcock’s crowning achievements in his impressive body of work.

What a hidden gem! I had such a lovely time at a recent showing of Godzilla (1954). This theater is a bit timeworn, yet undeniably quaint and charming with an unconventional feel. And interestingly enough, the audience served as the sweet element of surprise. Those in attendance created an atmosphere of delight, comfort, and personal acceptance… and get this.. there was an actual host who presented a brief preface to the film just prior to viewing. Very collegiate, which I loved!  All in all pe… END_OF_DOCUMENT_TOKEN_TO_BE_REPLACED