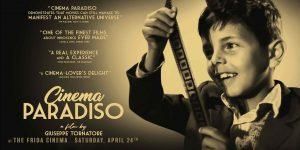 Last July, I prepared to say goodbye to the Frida Cinema. I’d been accepted into an English PhD program at The University of Texas at Arlington. I was awaiting word on whether I had to attend in person, depending on Covid concerns. I arranged a private screening at the theater with some of my closest friends and fellow volunteers. We watched my second favorite film, Giuseppe Tornatore’s The Legend of 1900. I had never seen it on the big screen before; it was a special moment to share with others.

In retrospect, my farewell was premature. Hours before we met up, I received an email saying my courses had all transitioned to online. Instead of packing up a U-Haul to head to the Dallas-Fort Worth area, I found myself a few days later stepping through the door of my childhood home in Visalia, CA. While trying to teach an introduction to rhetoric course and attend classes from a computer was initially difficult, I soon acclimated to the “new normal.”

That isn’t to say it wasn’t difficult. Remote learning comes with its own challenges. But I tried to spend my spare time with my family as much as I could. Still, being far away from many of my friends and my beloved cinema took an emotional toll on my heart.

I escaped down to Orange County whenever I could. I even attended two Frida drive-in events, Jurassic Park and The Exorcist. The occasions were bittersweet. It was comforting to see the Frida thriving, rather than just surviving, while other independent art house cinemas around the world were sadly shuttering their doors and switching off their marquee lights for good.

I remotely stayed on as a writing team member, contributing content to the Frida’s blog whenever I could. While we were all Zoom fatigued, it was nice to connect with everyone for an hour during our weekly meetings.

In celebration of the news that the Frida was reopening this month, I devoted my birthday to raising money for them to help with their reopening costs. With everyone’s help, I was able to raise $541 through Facebook alone, not including through donation links I sent via Twitter, Instagram, or text messages.

While the Frida’s soft opening was signaled by a screening of Dazed and Confused, perhaps the more relevant and appropriate film on the schedule is Giuseppe Tornatore’s beloved Cinema Paradiso.

For those who are unfamiliar with the film, the narrative revolves around a filmmaker (Jacques Perrin) who returns to his hometown for the funeral of his friend, Alfredo (Phillippe Noiret). During this time, he recalls his youth and his first love, but especially his bond with Alfredo, who was the projectionist of their tiny single-screen movie theater.

The film is no stranger to the Frida. Executive Director Logan Crow and Programming Director Trevor Dillon have previously screened it on Art House Theater Day.

But what is most important about Cinema Paradiso is the way it captures the heart of moviegoing, the nostalgia of youth, and the importance of cinema. Cinema Paradiso essentially serves as a testament to the power of movies, the people who create them, and the people who watch them. With its bittersweet nostalgia and Ennio Morricone’s emotional score, the film never fails to make me cry.

For the four years I served as a volunteer at the Frida Cinema, I couldn’t help envisioning how my life paralleled that of young Salvatore in the film. It seemed that the cinema occupied a large portion of my life. At one point in the film, Alfredo tries to make Salvatore understand that there are greater things for him to aspire to in life:

While a volunteer, these lines of dialogue would resound in my head, my mind replacing “the Paradiso” with “the Frida”. But it’s only now, as the theater reopens and I must move at the end of summer, that the weight of the words finally hits me with a sense of finality.

It is time to move on. That doesn’t mean I won’t visit the Frida as much as I can this summer or during return trips to California. But as I stand on the threshold of this next part of my life, Alfredo’s advice to Salvatore as he sees him off at the train station comes to mind:

“Whatever you end up doing, love it. The way you loved the projection booth when you were a little squirt.”

My heart aches and tears form at my eyes while I write these words, but Alfredo is right. I cannot live in the past. The Frida isn’t my whole life, only a defining part of it.

But I carry the memories it gave me. The laughter. The joy. The lasting friendships. Love.

The Frida remains, in my heart, my own personal Cinema Paradiso.

What a hidden gem! I had such a lovely time at a recent showing of Godzilla (1954). This theater is a bit timeworn, yet undeniably quaint and charming with an unconventional feel. And interestingly enough, the audience served as the sweet element of surprise. Those in attendance created an atmosphere of delight, comfort, and personal acceptance… and get this.. there was an actual host who presented a brief preface to the film just prior to viewing. Very collegiate, which I loved!  All in all pe… END_OF_DOCUMENT_TOKEN_TO_BE_REPLACED