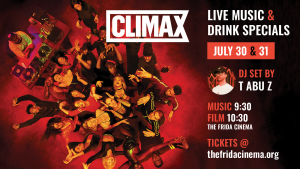 Join us on July 30th & 31st for a special Frida After Dark event with drink specials and a live DJ set by T ABU Z followed by a screening of  CLIMAX — party starts at 9:30pm and the film at 10:30pm!  Tickets are on sale now!

From A24 and director Gaspar Noé comes Climax, a hypnotic and hallucinatory portrayal of a party that descends into delirium over the course of a night.

In the mid 90’s, 20 urban dancers join together for a three-day rehearsal in a closed-down boarding school located at the heart of a forest to share one last dance. They then make one last party around a large sangria bowl. Quickly, the atmosphere becomes charged and a strange madness will seize them the whole night. If it seems obvious to them that they have been drugged, they neither know by who nor why. And it’s soon impossible for them to resist to their neurosises and psychoses, numbed by the hypnotic and the increasing electric rhythm of the music. While some feel in paradise, most of them plunge into hell.

Packing a punch as potent as any of Noe’s other films, Climax is yet another striking offering from the Enter the Void director.

I love the Frida, as an avid movie watcher, it’s great to have a place to go where many classic, cult and underrated films are shown. I had the pleasure of attending “The Decline of Western Civilization” screening with director Penelope Spheres doing a Q&A. Her films are so historically important and impacted me at a very young age. I am forever grateful for the experience, like nowhere else would this be possible. I think it’s truly amazing what the staff and everyone involved is doing for the … END_OF_DOCUMENT_TOKEN_TO_BE_REPLACED

thefridacinema
•
Follow
RESCHEDULED! You Michael Mann fans out there are tenacious! Can’t say we blame you! By popular demand, we’re extending our Michael Mannuary series into February with rescheduled and much-requested classics COLLATERAL (February 1, 2 & 3) and MIAMI VICE (February 11 & 12)! HEAT will run as scheduled starting this Friday the 28th! Showtimes and tickets now available at http://thefridacinema.org!
View on Instagram |
1/16

thefridacinema
•
Follow
THIS WEEKEND’S DRIVE-INS CANCELED — Due to this weekend’s High Wind Warning, and incredibly strong winds on the @messhallmarketoc parking lot rooftop, we will be rescheduling this weekend’s planned El Topo and The Holy Mountain screenings. New dates will be announced next week. Thank you, and please stay safe out there.
View on Instagram |
2/16

thefridacinema
•
Follow
Coming to The Frida next Friday, January 28th! Acclaimed filmmaker Pedro Almodóvar returns with PARALLEL MOTHERS, a powerful new drama starring Academy Award-winner Penélope Cruz. Showtimes and tickets at http://thefridacinema.org. “A ravishingly crafted work that again illustrates with ineffable beauty that no one uses the expressive power of color and design quite like Almodóvar.” - Hollywood Reporter
View on Instagram |
3/16

thefridacinema
•
Follow
TOMORROW, Thursday January 20th! Join us as we kick off CLASSICS ON FRENCH STREET - a new program featuring FREE outdoor screenings of family-friendly classics, presented right around the corner from The Frida on French Street - with THE WIZARD OF OZ! Screenings are free and open to the public, thanks to the generous partnership of City of Santa Ana and Community Engagement @ce_org, and will happen the 3rd Thursday of every month through June! Capacity is limited — RSVP on our event page at http://thefridacinema.org!
View on Instagram |
4/16

thefridacinema
•
Follow
Take a trip with us this Friday night as we kick off the return of DRIVE-IN DINE OUT nights at Tustin’s @messhallmarketoc, with Alejandro Jodorowsky’s legendary psychedelic cult classic EL TOPO! If you couldn’t make it out to Joshua Tree when we screened it there in August 2020, now’s your chance! 🎟Tickets available at thefridacinema.org! 🎥🚗
View on Instagram |
5/16

thefridacinema
•
Follow
Join us January 28th & 29th as we kick off CAGE MATCH with The Rock (1996) and The Wicker Man (2006)! Cage Match is a no-holds-barred movie tournament featuring 16 films from “The Patron Saint of The Frida Cinema” himself, the one-and-only Nicolas Cage. Every month, we will pair up two Cage classics against each other, and whichever film sells more tickets will move on to the next round. There will be a round of sweet sixteen, elite eight, final four, and then the Cage Match championship! May the most Cagey movie win! We’ll post up the full bracket soon!
View on Instagram |
7/16

thefridacinema
•
Follow
This Thursday night in Downtown Santa Ana! Join us for the first of our CLASSICS ON FRENCH STREET events, featuring FREE outdoor screenings of family-friendly classics, presented right around the corner from The Frida on French Street! Screenings are free and open to the public, thanks to the generous partnership of City of Santa Ana and Community Engagement @ce_org, and will happen the 3rd Thursday of every month through June! Capacity is limited — RSVP on our event page at http://thefridacinema.org!
View on Instagram |
8/16

thefridacinema
•
Follow
The Frida’s DRIVE-IN | DINE OUT is back! We’re thrilled to be returning to Tustin’s @messhallmarketoc to bring you great nights of art house and cult favorites, plus great bites from Mess Hall Market’s family of restaurants, all enjoyed from the comfort of your car! We’re kicking it off next weekend with two psychedelic classics from one of our favorite filmmakers, Alejandro Jodorowsky — EL TOPO (Friday, January 21) and THE HOLY MOUNTAIN (Saturday, January 22)! Tickets available now at thefridacinema.org! 🎥 🚗
View on Instagram |
9/16

thefridacinema
•
Follow
In consideration of the incredible strain that our local OC hospitals are enduring due to Omicron, we have made the difficult decision to temporarily close our doors. By all accounts current numbers should be decreasing over the next two weeks, so we look forward to reopening on Friday, January 28th. We will be hosting several outdoor events over the next two weeks, including a FREE outdoor screening of The Wizard of Oz next Thursday January 20th (with major gratitude to the City of Santa Ana and Community Engagement @ce_org for their support!), and our #DriveIns return to @messhallmarketoc next Friday! Visit http://thefridacinema.org for updates, schedule and tickets, and more! Please stay safe out there. 🎥❤️
View on Instagram |
10/16

thefridacinema
•
Follow
Our final screening of THE TRAGEDY OF MACBETH is tonight at 8pm!
View on Instagram |
11/16

thefridacinema
•
Follow
FILM TRIVIA — TONIGHT! We’ve got seven teams signed up for Movie Trivia Night tonight, Tuesday January 11th! These cinephiles are so confident they know movies better than you do — are you and your friends cine-savvy enough to prove them wrong? Sign up at thefridacinema.org/trivia! Doors open at 7:30PM, and the games will begin shortly after! 🎥 🧠
View on Instagram |
13/16

thefridacinema
•
Follow
Opening this Friday — Academy Award winner Asghar Farhadi (A Separation, The Salesman) returns with A HERO. Winner of the Grand Prix award at the Cannes Film Festival, is “a superb morality play that immerses us deeply in a society’s values and rituals, and keeps us guessing right up to its powerful final shot” (Time Out). Info, showtimes and tickets available at http://thefridacinema.org.
View on Instagram |
14/16

thefridacinema
•
Follow
“Thief is the best crime movie since Chinatown. Period. And it's better.” Bold words, Michael Ventura of L.A. Weekly! Agree or disagree, there’s no denying that Michael Mann’s 1981 thriller THIEF marked one of cinema’s most exciting and boldly stylish directorial debuts. Catch it today and this week at The Frida as our Michael Mannuary series continues!
View on Instagram |
16/16
Follow us on Instagram