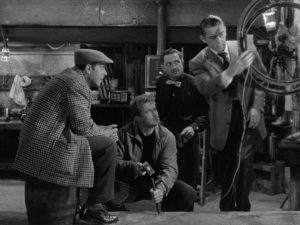 Jules Dassin’s 1955 film noir Rififi had been on my watchlist for a long time, and when The Frida offered it to stream, I finally seized the opportunity to check it off. Up until then, I’d avoided learning anything specific about it in fear of influencing my experience. So, while I’d seen some of Dassin’s other films and knew how his career in Hollywood had become a casualty of the blacklist in 1950; I was surprised to learn that Dassin had also acted in Rififi as Italian safecracker César “le Milanais,” credited under the pseudonym “Perlo Vita.”

Knowing this, César’s fate took on a new and unexpected layer of meaning, one that seems to allude to the very reason Dassin began making films in France: The Second Red Scare and the resultant Hollywood blacklist. The United States has always had a rather…uneasy relationship with communism, to say the least, as evidenced by the fearful spike of commotion surrounding socialism and communism immediately following the First World War. Post-World War II anxiety around Soviet actions resurrected these apprehensions, coalescing into what would later be known as the Second Red Scare. In 1947, the House Un-American Activities Committee (HUAC) set out to investigate the possibility of Communist influence on Hollywood films. Nine days of hearings regarding alleged communist influence/propaganda concluded in the tight-lipped Hollywood Ten being convicted of contempt of Congress and the boycotting of over 300 artists by major studios. After the production of his 1950 film noir Night and the City, Dassin, who had been a member of the United States’ Communist Party, found himself effectively barred from making films in Hollywood. In 1951, fellow director and member of the Hollywood Ten Edward Dmytryk broke his silence and testified to HUAC. Dmytryk admitted to having been a Communist and proceeded to name other Communist Party members—one of whom was Jules Dassin.

Soon afterward, Dassin left for Europe and would not direct another film until Rififi. It stands to reason that the blacklist and exile would leave visible marks on Dassin’s work, especially after such a period of professional stagnation. Dassin’s character, César, meets his end at Tony’s hands for breaking the group’s code of silence and revealing Mario’s involvement in the heist, which leads to the deaths of their co-conspirator Mario and his wife. Citing “the rules,” Tony executes César. Though perhaps not deliberately, César’s betrayal echoes Dmytryk’s decision to name names before Congress in an attempt to save his career, effectually leading to the ostracization of other filmmakers.

César’s character arc makes clear the Second Red Scare’s lasting impact, while also suggesting certain moral questions that remain difficult to answer. Did Dmytryk owe it to his fellow filmmakers and the rest of the Hollywood Ten to stay close-lipped, even at the cost of his career? How does one reconcile Dmytryk being allowed to rehabilitate his career post-testimony while a multitude of careers stagnated or even ended as a result of the blacklist? Dassin himself may not have deliberately set out to answer these questions, but nonetheless, his stance seems clear.

On the flip side of this question regarding information stands another blacklist-adjacent film: Elia Kazan’s On the Waterfront, which was released in 1954, a year prior to Rififi. Like Dmytryk, Kazan was also briefly a member of the Communist Party and aided in identifying fellow party members before HUAC. It is worth noting that Kazan’s testimony cost him many friends in the film industry. Since On the Waterfront hinges on dockworker Terry Malloy (Marlon Brando) making his decision to testify in court regarding corrupt union leaders, it doesn’t take much imagination to see impressions of then-contemporary political concerns within the film. Though no one can speak to Dassin’s artistic intentions, or say that Rififi was a direct response to On the Waterfront, it is still very intriguing to see that, regardless of their politics, they both attest to the impact the Second Red Scare had on artists and their work.

The myriad ways in which art and politics complicate each other, especially in American history, is more nuanced and complex than can be encapsulated in any one blog post. For all the grief that it caused, the Second Red Scare brought to light the intertangled relationships between filmmaking, culture, and politics in America. For anyone interested in learning more about the Hollywood blacklist, its prehistory, and its aftereffects, I recommend Karina Longworth’s podcast You Must Remember This and its series on the blacklist, starting with this episode. In addition, Miranda J. Banks’ book The Writers: A History of American Screenwriters and Their Guild covers the history of the Writers Guild of America from its inception and includes chapters on the severe impact the HUAC inquisitions had on Hollywood creatives.