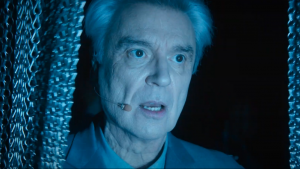 “So, after all this, what do I think this show is about? I won’t say—that’s like putting the nose on the clown—but I will say the title is not ironic.” 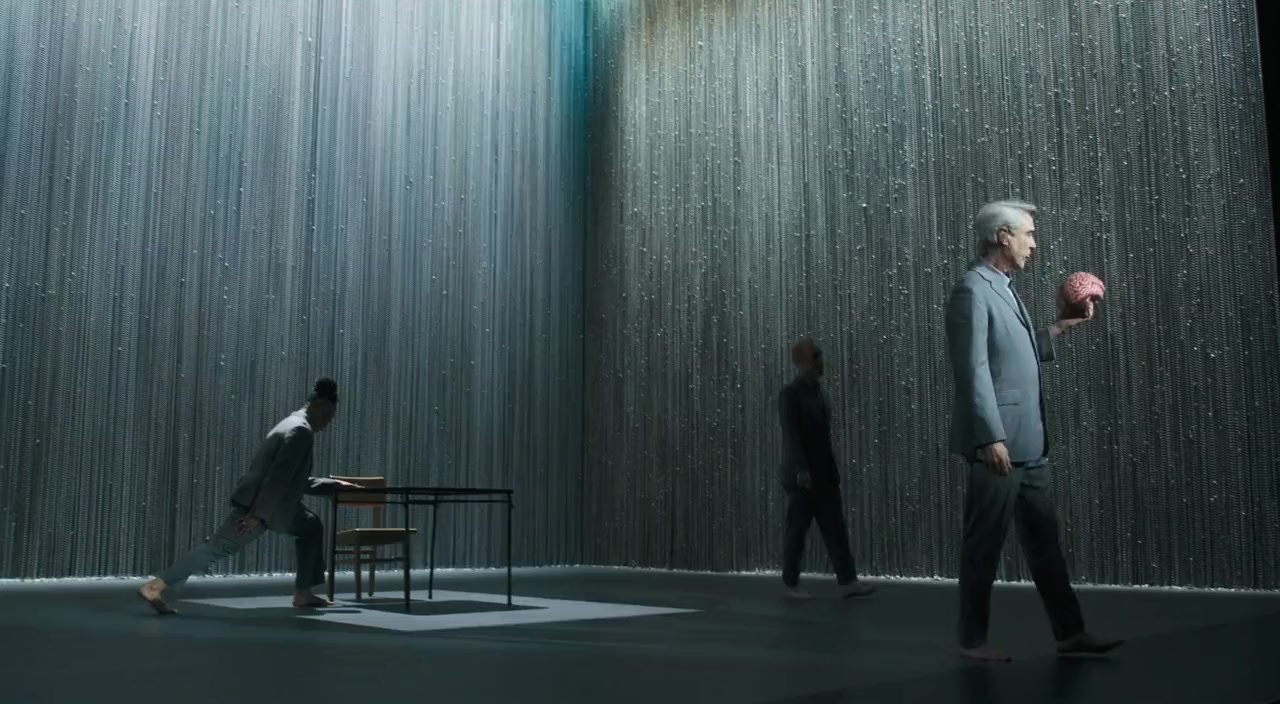 Broadway’s a long way from Brooklyn. Geographically and, if the recent data on theater attendance is any indication, then racially as well. Ever since his monumental debut film She’s Gotta Have It in 1986 (another superlative year for American indie film directors), Atlanta’s native son Spike Lee has been photographing New York City spaces in his work for decades. The latest joint (playing at the Frida Cinema for a special two night performance) is a concert documentary generously titled David Byrne’s American Utopia, and it finds Lee at the Hudson Theater on Broadway for a once in a lifetime collaboration with another essential New York artist: David Byrne of Talking Heads. It’s a match made in heaven, as the film keeps the unique proclivities of both its creators front-and-center without distracting from its central message of communion and integration. That it’s already the sharpest, most engrossing concert documentaries of this century is just sugar on the tongue. In the 15 or so years since his last album Grown Backwards in 2004, David Byrne has been staying busy: numerous album collaborations and world tours, grand openings at art galleries, writing a hit book called How Music Works, and even becoming a US citizen. Yet somehow, it wasn’t until the release of his newest album of original songs in 2018, “American Utopia”, that David Byrne began to be earnestly acknowledged as a true American Artist by the wider public, including, and especially, newer generations of music fans. Once derided as a figurehead of pretentious New York intelligentsia, Byrne has now graduated to a much more flattering cultural echelon that affords him the opportunity to sell out the Hudson on Broadway with an even more minimalist production than what had been seen in previous live shows. The enigma of history. Produced by Byrne and longtime collaborator Brian Eno, the American Utopia album is an extension of the pair’s studio experimentation with electronic loops and vocal distortions in the 70’s and 80’s. When preparing the songs for the Broadway stage however, Byrne devised new arrangements that are liberated from their digital composition so as to more complement the historic venue they would be performed in. This recontextualization of instrumentation in relationship to venue proves a creative intent that goes beyond simple transposition; Byrne’s trying to say something about the modularity of art’s purpose as well. The analog sequencing of popular cuts like “I Zimbra” are filtered through a living, breathing band with wireless instruments and amplifiers that offer complete freedom of movement. With an empty stage, all attention becomes focused on the company, the most minute shifts in their body, and the music itself; music as a celebration of community in crisis. 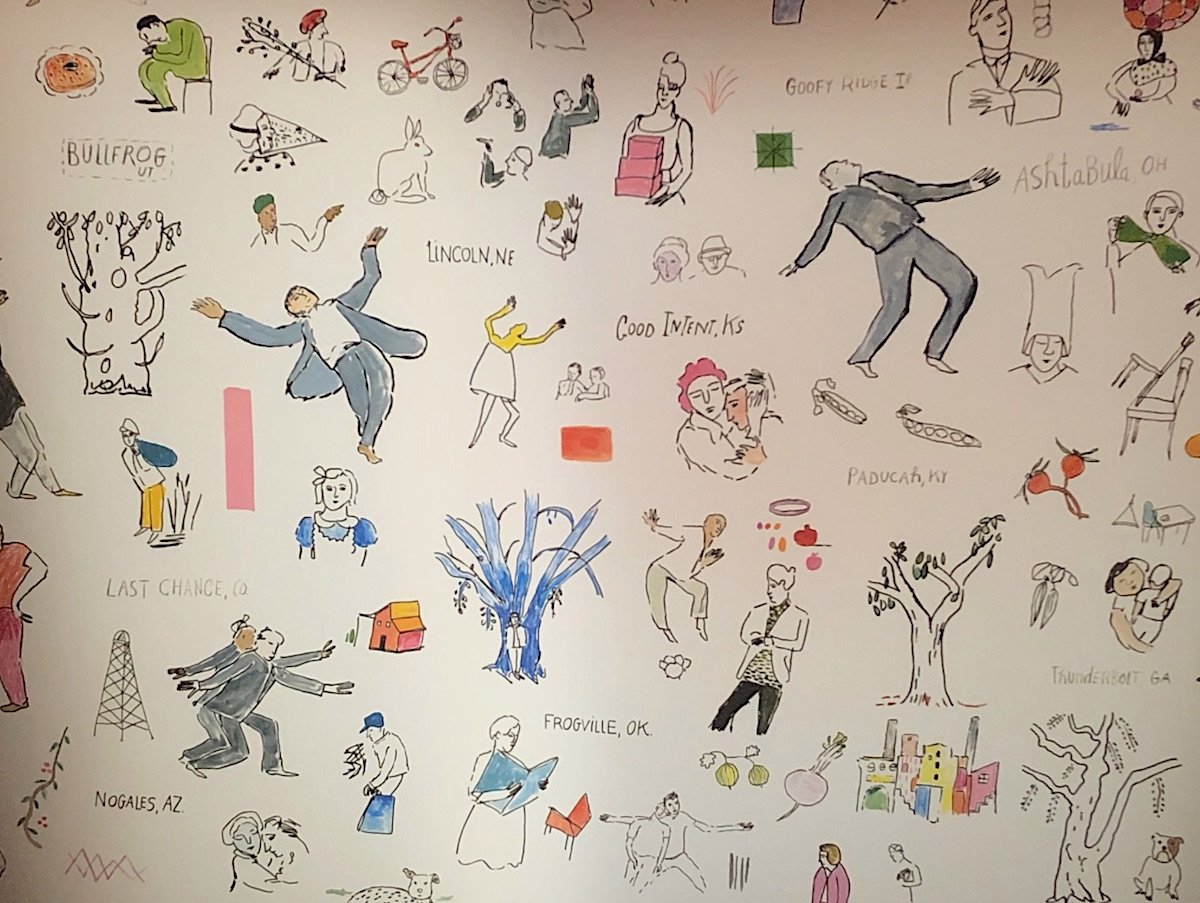 The first images Spike Lee deploys for his depiction of this kinetic dance opera are of a curtain of illustrations by artist Maira Kalman that hangs from the proscenium. The colorful designs are eye-catching enough to stand on their own, and seem to keep the attendant audience members waiting for the show to begin in a trance. With its robust configuration, American Utopia channels the same gladsome energy of Jonathan Demme’s supremely influential west-coast companion film, Stop Making Sense (1984). Where Demme opted for a rigorously self-contained closed loop of Talking Heads’ avant-garde performance art (with audience members more or less excised from the frame), Lee broadens the scope of his camera to extend beyond the venue, and to include the literal world as context to the events onstage rather than a detraction from them. This newer, fresher paradigm of concert documentary integrates audience and performer in a profound way that stands in contrast to the strict stage boundaries seen in Demme’s film and films like it. Between songs, David Byrne will soliloquize to the audiences with anecdotes about the past and insights about the future; speaking with such grace and calm, it’s difficult to imagine him as the same Nervous Young Man twitching onstage in the Bowery at CBGB’s. The bald faced sincerity of American Utopia stands in deep contrast to Byrne’s dadaist, throw-anything-at-the-wall-and-see-what-works ethos that he cultivated with Talking Heads, but it’s also one of the primary charms of him as an artist. In the early days, Byrne’s commitment to irreverent and abstract expressionism supplanted the audience’s traditional need for music (and art) that was easily digestible, and with clearly defined authorial intent. Which makes the didactic messaging in American Utopia all the more indicative of a shift in Byrne’s artistic priorities. 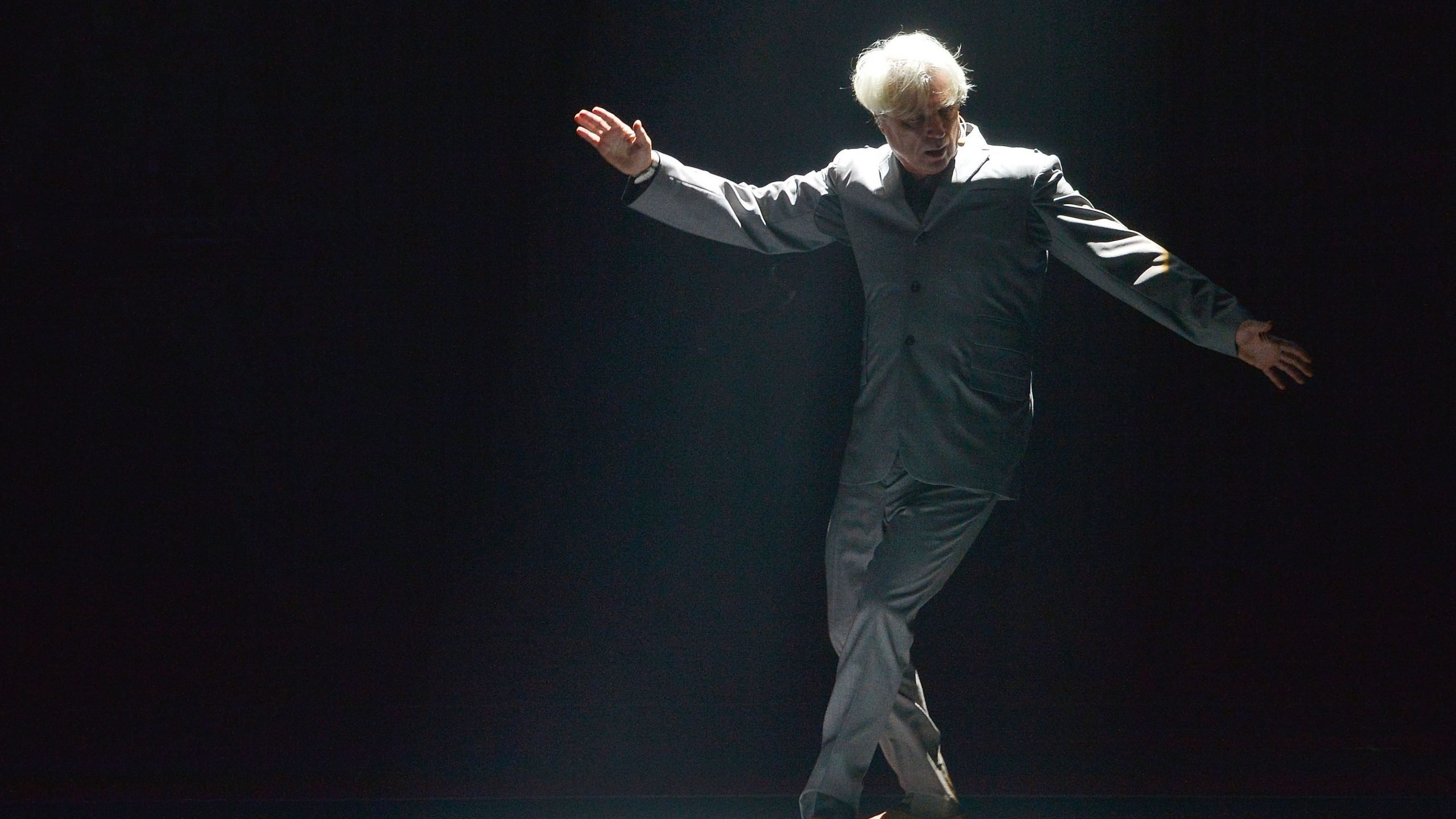 In an interview with Esquire Magazine for the release of this film in 2020, David Byrne was asked about the artists’ responsibility in questioning the status quo. He responded: “If you’re feeling [responsibility], you have an obligation to act on what you’re feeling. But it doesn’t have to be directly engaging with specific issues. There are people who, let’s say, just do comedy. They still allow people to see each other in a different way. They’re doing something.” For Byrne, that “something” seems to be confronting his own privileges for the sake of mitigating disharmony and building unity. In the most show-stopping number of the film, Byrne and company perform a rendition of Janelle Monáe’s “Hell You Talmbout” wherein the names of victims of police brutality are recited. It’s in this moment where the creative sensibilities of all these magnificent artists are finally synthesized into an electrifying singularity, fleeting but powerful. Spike Lee allows the deceased this moment for catharsis, but for the gathered Broadway and film audiences, it’s a call to action as well. The eternal struggle for justice and equality is not solved merely with song, but with persistent active dismantling of oppressive structures by the body politik. This is, perhaps, a far-cry from the simple observations about apartment buildings and romantic love that dotted Byrne’s early songwriting, but it speaks to the ways in which we all eventually mature beyond our sophomoric tendencies for the betterment of the people around us. Lest all these passionate emotions not have anywhere to go, Byrne and Lee identify clear ways for the individual to make a difference in their neighborhood – the credits conclude with a phone number that can be texted for information on how to get involved locally. The greater message here however seems to be that we must also believe we can make a difference as well – a radically naive assertion in a post-Trump era, but Byrne’s confidence is infectious. Of course, his optimism is not his own. Following the Janelle Monáe cover, Byrne quotes author James Baldwin in a passage that, to use Byrne’s own words, puts the “nose on the clown” in the most elegant of ways. Baldwin says, “I still believe that we can do with this country something that has not been done before.” Utopia is not so fallacious to pursue, it is the desire for (and celebration of) progress. Progress derived from the actions of every single one of us. We can all do better. The heat must go on. 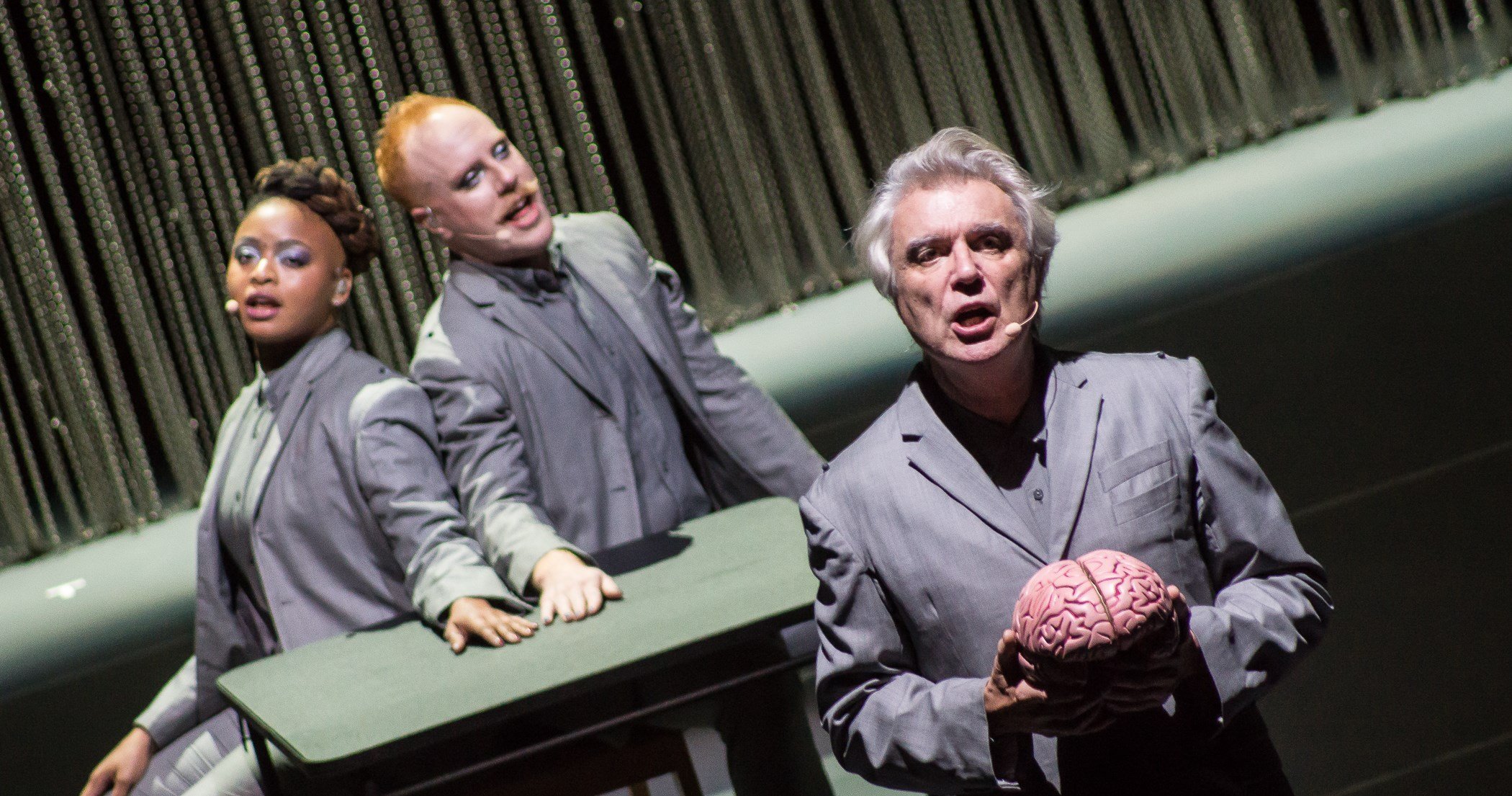 What a hidden gem! I had such a lovely time at a recent showing of Godzilla (1954). This theater is a bit timeworn, yet undeniably quaint and charming with an unconventional feel. And interestingly enough, the audience served as the sweet element of surprise. Those in attendance created an atmosphere of delight, comfort, and personal acceptance… and get this.. there was an actual host who presented a brief preface to the film just prior to viewing. Very collegiate, which I loved!  All in all pe… END_OF_DOCUMENT_TOKEN_TO_BE_REPLACED

I love the Frida, as an avid movie watcher, it’s great to have a place to go where many classic, cult and underrated films are shown. I had the pleasure of attending “The Decline of Western Civilization” screening with director Penelope Spheres doing a Q&A. Her films are so historically important and impacted me at a very young age. I am forever grateful for the experience, like nowhere else would this be possible. I think it’s truly amazing what the staff and everyone involved is doing for the … END_OF_DOCUMENT_TOKEN_TO_BE_REPLACED

LOVE this theater..OMG. I’ve been here several times now for different events. I’ve attended 2 of the 3 Scott Pilgrim events thrown by Cinemattack. I was even the lucky winner of the Scott Pilgrim album on vinyl. I don’t have a record player..but may as well be a trophy for me because I never win anything! lol. I also attended “The Last Unicorn” event with Peter S Beagle- the author speaking and answering a Q and A afterwards. This was so awesome. I have always loved loved this movie and it was … END_OF_DOCUMENT_TOKEN_TO_BE_REPLACED