Days of the Whale

Set in the bustling city of Medellín, Colombia’s second-largest city, Days of the Whale follows Cristina (Laura Tobón) and Simon (David Escallón), two young graffiti artists who tag spots around where they live. 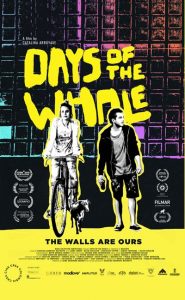 Simón comes from a more working-class background and lives with his grandmother. They are part of an art collective that is the center for a group of young revolutionaries. Cristina is a college kid from an upper-middle-class family who finds herself living with her dad because her mother is a journalist who moved to Spain when threatened by the city’s criminal street gangs. The love that unites them, and their friendship with other artists keeps Cristina from leaving the city as tensions rise when Cristina and Simon’s rebellious, restless spirit leads them to defy this same gang by painting a mural over a threatening tag at the center.

Link to purchase tickets to stream this film in our Virtual Cinema will be available from Friday, July 24th (Thursday at Midnight) until Thursday, August 7th. To purchase and stream, click the button below!

“An indomitable youthful exuberance thrums through ​ Arroyave Restrepo​’s … confident, good-looking debut… the unmistakably upbeat filmmaking is slightly at odds with the precarious situation it is portraying.” – Variety

“Arroyave Restrepo is able to encapsulate so much about the universal experience of being a teenager…a quiet, beautiful coming of age story.” – Film Threat

“A gem of a film. The story is compelling, the art is amazing, the sense of place is near perfect.” – UnSeen Films

“A story of youthful rebellion and the inevitable consequences of getting in with the wrong crowd.” – Flixist

I love the Frida, as an avid movie watcher, it’s great to have a place to go where many classic, cult and underrated films are shown. I had the pleasure of attending “The Decline of Western Civilization” screening with director Penelope Spheres doing a Q&A. Her films are so historically important and impacted me at a very young age. I am forever grateful for the experience, like nowhere else would this be possible. I think it’s truly amazing what the staff and everyone involved is doing for the … END_OF_DOCUMENT_TOKEN_TO_BE_REPLACED