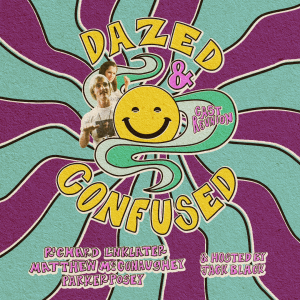 WE’RE BACK!! And since our kick-off screening on April 20th sold out, we’re giving you two more opportunities to join us — April 21st and 22nd at 7:30pm — as we join art house cinemas around the world in partnering with our colleagues at Alamo Drafthouse to present a special screening of Richard Linklater’s Dazed and Confused! — followed by a screening of a brand new Cast Reunion that the Alamo Draftouse will be conducting and sharing with participating theaters!

Ranking 3rd in Entertainment Weekly’s “50 Best High School Movies,” writer-director Richard Linklater’s classic perfectly captures the irreverence, angst, goofiness, and liberating hedonism of the high school years – this time, in 1976. It’s the last day of school at Lee High School, and students are celebrating accordingly with rituals including house parties, cruising, and tormenting incoming underclassmen. Highlighting the ensemble of rich characters is star athlete Randall “Pink” Floyd (Jason London), who is under pressure to sign a pledge affirming that he will not use recreational drugs; incoming freshman Mitch Kramer (Wiley Wiggins), who valiantly tries to avoid being hazed by next year’s seniors; cruel Darla (Parker Posey), who’s having way too much fun terrorizing freshman girls; and so many more memorable characters played by an impressive cast that includes Ben Affleck, Milla Jovovich, Adam Goldberg, Anthony Rapp, Renee Zellweger, and an iconic Matthew McConaughey.

Dazed and Confused remains timeless as ever as its legacy continues to grow. It is featured on countless Best Of lists, including Entertainment Weekly’s Funniest Movies of the Past 25 Years, and Quentin Tarantino recently listed it in his top ten favorite films of all time for a Sight and Sound poll.

SAFETY GUIDELINES: We will be following CinemaSafe guidelines, which includes limiting capacity to 50% of capacity (which makes space even more limited than usual —get your tickets today!); ensuring social distancing in our lobby; and requiring our guests wear masks, with exception to taking in food and beverages at your seat. We will also be conducting temperature checks at entry — guests who register a temperature of 100.4° F (38° C) or higher will be allowed to re-test after a few minutes, but if fever persists, will not be admitted and advised to go home, and rest and fluid up!

See you at The Frida!