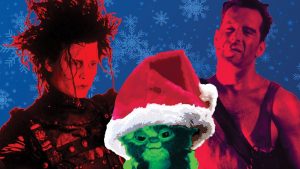 First, we get it — not everyone considers Die Hard a “Christmas Movie.”  And as the 1988’s action classic’s legacy has grown over the years, it’s been as surprising to those who’ve always considered Die Hard a Christmas movie to learn that there are folks who find the idea completely ludicrous, as it’s been to those who’ve never considered Die Hard to be a Christmas movie to learn there’s a reason revival cinemas tend to program it around this time of year. While Entertainment Weekly called it “the perfect Christmas movie,”  the BBC’s “People are claiming Die Hard is a Christmas film and it’s tearing the internet apart. Again.” is just one of hundreds (literally) of articles you’ll find online suggesting that this unlikeliest of cinematic controversies is far from over.  There may be no greater dissertation than StephenFollows.com’s “Using data to determine if Die Hard is a Christmas movie” — and even that exhaustive examination ends with a less-than-definitive answer.  To which I say: such is art.

Over at The Frida, we definitely consider Die Hard a Christmas Movie, and since 2014 it has joined two other is-it-or-isn’t-it classics – 1984’s Gremlins and 1990’s Edward Scissorhands, the latter first brought to us as part of CinemAttack’s Winter Formal – as annual December staples in our programming.  This year, as our cinema continues is temporary closure due to COVID-19, we’re keeping this tradition going via our Pop-Up Drive-In!

Visit thefridacinema.org/drive-in for our updated list of Drive-In titles and locations!  Also added to our roster today: fellow Christmas-themed classics Batman Returns and Black Christmas; 1968 Kaiju classic Destroy All Monsters; one of the newer Frida audience favorite, 2019 WTF-musical Cats; and to close out 2020, the highest-grossing first-run release in our cinema’s history, Panos Cosmatos’ visionary 2018 thriller Mandy!

We’ll see you at the Drive-In!  Stay safe out there!

I love the Frida, as an avid movie watcher, it’s great to have a place to go where many classic, cult and underrated films are shown. I had the pleasure of attending “The Decline of Western Civilization” screening with director Penelope Spheres doing a Q&A. Her films are so historically important and impacted me at a very young age. I am forever grateful for the experience, like nowhere else would this be possible. I think it’s truly amazing what the staff and everyone involved is doing for the … END_OF_DOCUMENT_TOKEN_TO_BE_REPLACED

What a hidden gem! I had such a lovely time at a recent showing of Godzilla (1954). This theater is a bit timeworn, yet undeniably quaint and charming with an unconventional feel. And interestingly enough, the audience served as the sweet element of surprise. Those in attendance created an atmosphere of delight, comfort, and personal acceptance… and get this.. there was an actual host who presented a brief preface to the film just prior to viewing. Very collegiate, which I loved!  All in all pe… END_OF_DOCUMENT_TOKEN_TO_BE_REPLACED

LOVE this theater..OMG. I’ve been here several times now for different events. I’ve attended 2 of the 3 Scott Pilgrim events thrown by Cinemattack. I was even the lucky winner of the Scott Pilgrim album on vinyl. I don’t have a record player..but may as well be a trophy for me because I never win anything! lol. I also attended “The Last Unicorn” event with Peter S Beagle- the author speaking and answering a Q and A afterwards. This was so awesome. I have always loved loved this movie and it was … END_OF_DOCUMENT_TOKEN_TO_BE_REPLACED