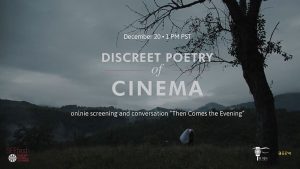 On Sunday, December 20th at 1pm PST, join us as The Frida Cinema partners with South East European Film Festival for an exclusive award-season screening of acclaimed 2019 Serbian short film Then Comes the Evening. Click here for tickets!

Winner of over a dozen international awards, Maja Novaković’s stunning debut has won over audiences at documentary film festivals around the world, and has qualified for the Academy Award in the Best Short Documentary category. Her film is a discreet, loving witness to the lives of two old women living in the isolated hills of Eastern Bosnia: their intimacy, their relationship to nature, and a whole cultural heritage made out of songs and rituals to tame bad weather, hail and storm.

The program will include the US premiere of Then Comes the Evening (Serbian title: A sad se spusta vece), which runs 28 min, followed by a conversation with Vera Mijojlić, Festival Director of South East European Film Festival (SEEfest) in Los Angeles, and Logan Crow, Executive Director of The Frida Cinema in Santa Ana.  Proceeds from ticket sales will benefit SEEfest and The Frida Cinema, non-profit cultural organizations dedicated to the art of cinema.

Audience questions are welcome, and encouraged!

What a hidden gem! I had such a lovely time at a recent showing of Godzilla (1954). This theater is a bit timeworn, yet undeniably quaint and charming with an unconventional feel. And interestingly enough, the audience served as the sweet element of surprise. Those in attendance created an atmosphere of delight, comfort, and personal acceptance… and get this.. there was an actual host who presented a brief preface to the film just prior to viewing. Very collegiate, which I loved!  All in all pe… END_OF_DOCUMENT_TOKEN_TO_BE_REPLACED