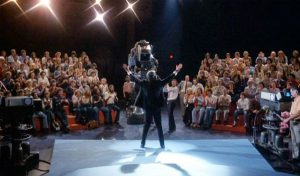 These past few months, the current social climate likely has you wanting to stick your head out a window and scream. And when times get rough, turning to cinema as an escape is a compulsion shared by many. People’s tastes in comfort movies vary, from the lighthearted to the tense. For those inclined to the latter, consider a double feature of Elia Kazan’s A Face in the Crowd (1957) and Sidney Lumet’s Network (1976), two films which deal with the effects of celebrity and the television medium.

A Face in the Crowd takes place in the late 1950s, when both radio and television were go-to media for mass communication, and tells the story of radio journalist Marcia Jeffries (Patricia Neal) and drifter Larry Rhodes (Andry Griffith). When Rhodes’ rustic charm and folksy demeanor proves popular with listeners, Marcia crafts for him the public image of “Lonesome” Rhodes, the everyman, and focuses her energy on managing his career. However, Lonesome’s sway over his audience proves stronger than anyone could have predicted. With increased popularity comes money and power, and the sincerity of Lonesome’s everyman image grows more and more questionable. A Face in the Crowd also stars Anthony Franciosa, Walter Matthau, and Lee Remick.

Network is a satirical drama about UBS, a fictional television network, and its struggles against declining ratings. When longtime anchor Howard Beale (Peter Finch) has an explosive outburst on the air, it seems to be another blow to the ratings—except the ratings skyrocket. To the dismay of Beale’s friend and UBS’s news division president, Max Schumacher (William Holden), the network’s executives opt to exploit Beale’s antics. However, the ratings boost doesn’t last forever, which prompts ambitious producer Diane Christensen (Faye Dunaway) to push for more and more outrageous programming. Similar to A Face in the Crowd, Network focuses on the effects of mass media and celebrity both on viewing public and on the celebrated individual themselves. The film also stars Robert Duvall, Ned Beatty, and Wesley Addy.

What a hidden gem! I had such a lovely time at a recent showing of Godzilla (1954). This theater is a bit timeworn, yet undeniably quaint and charming with an unconventional feel. And interestingly enough, the audience served as the sweet element of surprise. Those in attendance created an atmosphere of delight, comfort, and personal acceptance… and get this.. there was an actual host who presented a brief preface to the film just prior to viewing. Very collegiate, which I loved!  All in all pe… END_OF_DOCUMENT_TOKEN_TO_BE_REPLACED