Frameline Distribution celebrates the birthday and legacy of filmmaker Barbara Hammer with the virtual cinema release of Dykes, Camera, Action! 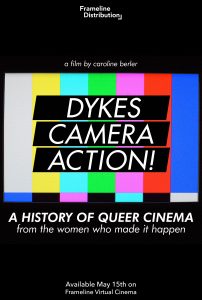 Lesbians didn’t always get to see themselves on screen. But between Stonewall, the feminist movement, and the experimental cinema of the 1970s, they built visibility, and transformed the social imagination about queerness. Filmmakers Barbara Hammer, Su Friedrich, Rose Troche, Cheryl Dunye, Yoruba Richen, Desiree Akhavan, Vicky Du, film critic B. Ruby Rich, Jenni Olson, and others share moving and often hilarious stories from their lives and discuss how they’ve expressed queer identity through film.

The end of the film features a special discussion with directors profiled in the film including Desiree Akhavan, Caroline Berler, Vicky Du, as well as filmmaker Kimberly Reed and Hammer’s life partner Florrie Burke. Moderated by filmmaker Jenni Olson.

Link to purchase tickets to stream this film in our Virtual Cinema will be available from Friday, June 5th (Thursday at Midnight) until Thursday, June 18th. To purchase and stream, click the button below!

A portion of every ticket purchased goes directly towards supporting Orange County’s only nonprofit Art-house theater. Tickets for Dykes, Camera, Action! are $10!

“Breathless and encyclopedic, eye-opening and essential.” — The Boston Globe

LOVE this theater..OMG. I’ve been here several times now for different events. I’ve attended 2 of the 3 Scott Pilgrim events thrown by Cinemattack. I was even the lucky winner of the Scott Pilgrim album on vinyl. I don’t have a record player..but may as well be a trophy for me because I never win anything! lol. I also attended “The Last Unicorn” event with Peter S Beagle- the author speaking and answering a Q and A afterwards. This was so awesome. I have always loved loved this movie and it was … END_OF_DOCUMENT_TOKEN_TO_BE_REPLACED