Ella Fitzgerald: Just One of Those Things

Tracing the story of her life, Ella Fitzgerald: Just One of Those Things explores how her music became a soundtrack for a tumultuous century. 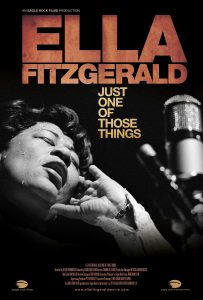 From a 1934 talent contest at the Apollo Theatrein Harlem, the film follows Ella’s extraordinary journey across five decades as she reflects the passions and troubles of the times in her music and life.

Link to purchase tickets to stream this film in our Virtual Cinema will be available from Friday, July 3rd (Thursday at Midnight) until Thursday, July 16th. To purchase and stream, click the button below!

“An insightful portrait drawn with warmth and a touch of swing.” — Sheri Linden, Hollywood Reporter

“The best thing about Ella Fitzgerald: Just One of Those Things, other than the music, is the way it evokes an era and reminds us that its subject was one of the great voices of the 20th century.” — G. Allen Johnson, San Francisco Chronicle

I love the Frida, as an avid movie watcher, it’s great to have a place to go where many classic, cult and underrated films are shown. I had the pleasure of attending “The Decline of Western Civilization” screening with director Penelope Spheres doing a Q&A. Her films are so historically important and impacted me at a very young age. I am forever grateful for the experience, like nowhere else would this be possible. I think it’s truly amazing what the staff and everyone involved is doing for the … END_OF_DOCUMENT_TOKEN_TO_BE_REPLACED

LOVE this theater..OMG. I’ve been here several times now for different events. I’ve attended 2 of the 3 Scott Pilgrim events thrown by Cinemattack. I was even the lucky winner of the Scott Pilgrim album on vinyl. I don’t have a record player..but may as well be a trophy for me because I never win anything! lol. I also attended “The Last Unicorn” event with Peter S Beagle- the author speaking and answering a Q and A afterwards. This was so awesome. I have always loved loved this movie and it was … END_OF_DOCUMENT_TOKEN_TO_BE_REPLACED