In celebration of the life and art of the great Daniel Johnston, who passed away this month at the age of 58, we are proud to present director Jeff Feuerzeig’s award-winning 2006 documentary The Devil and Daniel Johnston as our next Frida Cinema Film Club Members Only Screening.

His drawings and sketches are exhibited and sold worldwide. Beck, Wilco, Sonic Youth and Pearl Jam have recorded his songs. But beneath Daniel Johnston’s success as an artist and musician is an incredible story of genius touched by madness: diagnosed as manic-depressive, Johnston spent the last three decades of his life in and out of mental institutions, as his legacy as one of the most celebrated artistic geniuses of our time only continued to grow.

Told through a compelling combination of interviews, home movies and performance footage, The Devil and Daniel Johnston is “a harrowing, hilarious and ultimately moving new documentary film” (Jim Farber, New York Daily News), and the winner of the Sundance Film Festival for Best Documentary. 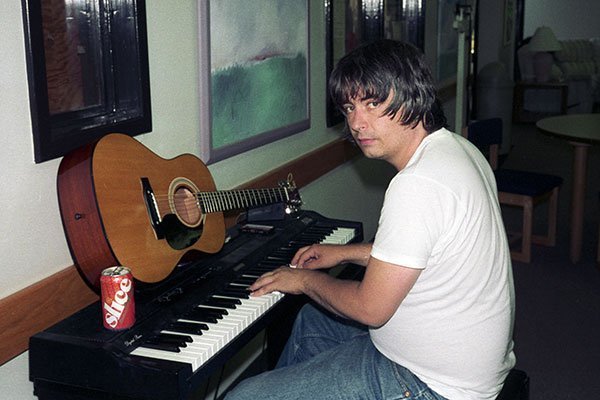 “There is a line that sometimes runs between genius and madness, sometimes encircles them.”  — Roger Ebert, Chicago Sun-Times

“A heartbreaking, yet strangely uplifting and inspirational, exploration of the fine line between genius and madness, and how sometimes, one becomes impossible to discern from the other.” — Renee Rodriguez, Miami Herald

“It’s the way Feuerzeig walks with him on the line between creativity and madness that digs this haunting and hypnotic film into your memory.” — Peter Travers, Rolling Stone

LOVE this theater..OMG. I’ve been here several times now for different events. I’ve attended 2 of the 3 Scott Pilgrim events thrown by Cinemattack. I was even the lucky winner of the Scott Pilgrim album on vinyl. I don’t have a record player..but may as well be a trophy for me because I never win anything! lol. I also attended “The Last Unicorn” event with Peter S Beagle- the author speaking and answering a Q and A afterwards. This was so awesome. I have always loved loved this movie and it was … END_OF_DOCUMENT_TOKEN_TO_BE_REPLACED

I love the Frida, as an avid movie watcher, it’s great to have a place to go where many classic, cult and underrated films are shown. I had the pleasure of attending “The Decline of Western Civilization” screening with director Penelope Spheres doing a Q&A. Her films are so historically important and impacted me at a very young age. I am forever grateful for the experience, like nowhere else would this be possible. I think it’s truly amazing what the staff and everyone involved is doing for the … END_OF_DOCUMENT_TOKEN_TO_BE_REPLACED