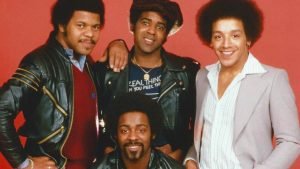 Success for Black British musicians in the UK was pretty rare until the last quarter of the 20th century, with the likes of Winifred Atwell and Shirley Bassey breaking through in the ’50s and ’60s for others to eventually follow. Atwell was the first black musician – male or female – to have a UK No.1 with Let’s Have Another Party, but it took until the long, hot summer of 1976 for the first all-black group to grab the top spot. That group was The Real Thing, four pioneers from Liverpool whose emergence played a key role in changing the musical landscape on these shores.

Simon Sheridan’s documentary, Everything – The Real Thing Story, lets the surviving members of the group tell their own story, recalling their rise from the tough streets of Toxteth in Liverpool, to winning over hundreds of thousands of fans across the UK. But it’s one that has to be told against the background of overt racism during the ‘70s and ‘80s at time when racial tensions were boiling over due to constant incitement by right wing neo-Nazi groups.

What a hidden gem! I had such a lovely time at a recent showing of Godzilla (1954). This theater is a bit timeworn, yet undeniably quaint and charming with an unconventional feel. And interestingly enough, the audience served as the sweet element of surprise. Those in attendance created an atmosphere of delight, comfort, and personal acceptance… and get this.. there was an actual host who presented a brief preface to the film just prior to viewing. Very collegiate, which I loved!  All in all pe… END_OF_DOCUMENT_TOKEN_TO_BE_REPLACED

LOVE this theater..OMG. I’ve been here several times now for different events. I’ve attended 2 of the 3 Scott Pilgrim events thrown by Cinemattack. I was even the lucky winner of the Scott Pilgrim album on vinyl. I don’t have a record player..but may as well be a trophy for me because I never win anything! lol. I also attended “The Last Unicorn” event with Peter S Beagle- the author speaking and answering a Q and A afterwards. This was so awesome. I have always loved loved this movie and it was … END_OF_DOCUMENT_TOKEN_TO_BE_REPLACED