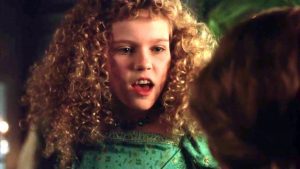 The Lost Boys runs October 23rd–25th at The Frida Cinema

Say it. Out loud… Vampire. Yes, that’s right, cinema’s best-known monster and arguably its oldest has gone through quite an evolution since it famously graced theater screens in F. W. Murnau’s 1922 silent classic Nosferatu: A Symphony of Horror. From bat-like humanoid in a drab frock to beauty-incarnate—and sometimes even sparkly—the vampire has been re-imagined in nearly every movie it appears in (Judas Iscariot in Dracula 2000, anyone?). Ironically, this character cannot appear in mirrors yet the vampire is an uncanny reflection of the society that sits in its audience; it is a snapshot of the times, in monster form. As fears and anxieties change, this enduring cinematic character remains fluid in motivation, sexuality, and aesthetics in order to suit the interests of current popular culture.

Vampire lore has inhabited the psyches and nightmares of humans very nearly since the dawn of written history. Fun mythological fact: Adam had a wife before Eve by the name of Lillith. She is said to have been a rebellious succubus and an entity who displayed vampiric characteristics according to ancient Sumerian myth. Lillith is often used as a progenitor figure in vampire narrative (i.e. the sexy vampire series, True Blood and 30 Days of Night: Dark Days), but the figure most responsible for vampire folklore is Vlad “The Impaler” Dracula. A Romanian prince from the 1400s, Vlad lost his father to the Ottoman War and infamously developed an insatiable blood lust; he is said to have enjoyed impaling his enemies on stakes and was even rumored to have eaten their flesh and drank their blood.

Also fueling rumors of vampires in eastern Europe were people who had begun to notice that the deceased were displaying unusual characteristics such as receding skin exposing the teeth and blood dripping from around their mouths as if they had exsanguinated some poor creature while no one was looking. In the late 1800s, Bram Stoker took the legend of The Impaler and villager lore and created, in essence, the definitive vampire story, Dracula—a novel about a nobleman named Count Dracula of Transylvania, upon whom most cinematic adaptations are based.

Although Dracula was not the first vampire novel and Nosferatu was not the first time the immortal character had appeared on the silver screen, these works were landmark masterpieces that reflected human activity and fears at the turn of the century. The third great pandemic landed at the doorsteps of eastern Europe towards the late 1800s and persisted into the 1900s. Octavia Butler’s 2005 novel Fledgling implicitly addresses the HIV/AIDS pandemic and its relationship to vampires. In writer/star/producer Naomi McDougall Jones’ 2019 film Bite Me, she relies on donors to get her blood fix, asking one donor about his most recent HIV test.

In Nosferatu, Count Orlock, played by Max Schreck, has a rodent-like face and hands because rats are typically carriers of diseases. Orlock is followed by rats in the film and he has the ability to spread the plague, exposing the psyche of an early 1900s society obsessed with a fear of death by pandemic. After this unlicensed feature (Stoker’s widow tried to have all prints destroyed) came Bela Lugosi’s iconic performance in Dracula, a close adaptation of Stoker’s novel and one of Universal Pictures’ earliest classic monster movies. Continuing in the same vein as Nosferatu, this adaptation reflected a fear of both the plague and the foreigner, with Lugosi’s thick Hungarian accent lending itself to this dark and fearful portrayal.

As we move into the late 1950s through the 1970s with Hammer Studios’ depictions starring the tall and imposing Christopher Lee, we begin to see more overt sexuality, a sign of the times as ideas of free-love infiltrated the zeitgeist of mid-century society. Mostly thanks to Hammer Studios, we see the rise in the telling of lesbian vampire narratives, ultimately based upon Joseph Sheridan Le Fanu’s 1872 novella Carmilla which predates Stoker’s vampiric depiction, and of which we famously see a heavy influence in Tony Scott’s chic and cool 1983 erotic-thriller The Hunger.

In the 1980s American cinema there came a sudden need to tell teen-oriented stories. Movies starring the Brat Pack dominated the industry as the rise of the teenager as a consumer helped shape 1980s pop culture. Thank Lillith it did, as it made a space for Joel Schumacher to sink his teeth into the vampire genre with arguably his best film, 1987’s The Lost Boys, which the Frida Cinema will be showing October 23rd-25th. This movie celebrated youth, style, and eternal beauty and, along with another teen vampire movie out of 1985, Tom Holland’s Fright Night, provided commentary on the ills of suburban life. Though Buffy the Vampire Slayer was more of a teen Van Helsing figure, the movie, and even better Joss Whedon’s TV series of the same name, continued along these lines of youthful depictions of vampire lore for the MTV age of society.

The ’90s: No Honey Butter for Bella

Hey, it’s the ’90s babe, when fashion, tech, wealth, and self-expression were at the forefront. Getting back to a more sleek and stoic characterization of vampires, Anne Rice’s The Vampire Chronicles was adapted to film, the first and most famous of which was 1994’s Interview With the Vampire, starring Tom Cruise, Brad Pitt, Kirsten Dunst, and Antonio Banderas. Depicting vampires at the height of their wealth, accumulated knowledge, and unearthly beauty, this film has homoerotic undertones and is at times as painful as it is beautiful. Conversely, Quentin Tarantino and Robert Rodriguez created a much more gritty vision of vampires with their 1996 film, From Dusk Till Dawn, a violent and sexy monster bash that tested audiences’ growing desensitization to gore and guts—we passed that test and vampire movies became more and more violent.

The Underworld series, about a war between eternal enemies—vampires and Lycans—came out in 2003, while America was mired in its own perpetual state of war. But just as audiences were beginning to enjoy a return to the classic horror aspect of vampire cinema, adaptations of young adult literature began dominating the movie industry in the mid-2000s, much like in the 1980s. Twilight was the result of this with its vegan vampires and more human sensibilities, but there were also some great film/television YA novel adaptations as well, such as True Blood which was as gory and sexy as it was political in its exploration of law, discrimination, and power.

Vampire cinema goes ‘wing and hand’ with our history. As socio-cultural ideals, demographics, and anxieties evolve so too does this versatile subgenre of horror. There are hundreds of movies about vampires—so many that I did not get to discuss their historical reflection and societal impact for the sake of brevity. Below are but a few honorable mentions and their socio-cultural relevance in this regard, that bare mentioning (and viewing, if not already seen):

I love the Frida, as an avid movie watcher, it’s great to have a place to go where many classic, cult and underrated films are shown. I had the pleasure of attending “The Decline of Western Civilization” screening with director Penelope Spheres doing a Q&A. Her films are so historically important and impacted me at a very young age. I am forever grateful for the experience, like nowhere else would this be possible. I think it’s truly amazing what the staff and everyone involved is doing for the … END_OF_DOCUMENT_TOKEN_TO_BE_REPLACED

LOVE this theater..OMG. I’ve been here several times now for different events. I’ve attended 2 of the 3 Scott Pilgrim events thrown by Cinemattack. I was even the lucky winner of the Scott Pilgrim album on vinyl. I don’t have a record player..but may as well be a trophy for me because I never win anything! lol. I also attended “The Last Unicorn” event with Peter S Beagle- the author speaking and answering a Q and A afterwards. This was so awesome. I have always loved loved this movie and it was … END_OF_DOCUMENT_TOKEN_TO_BE_REPLACED