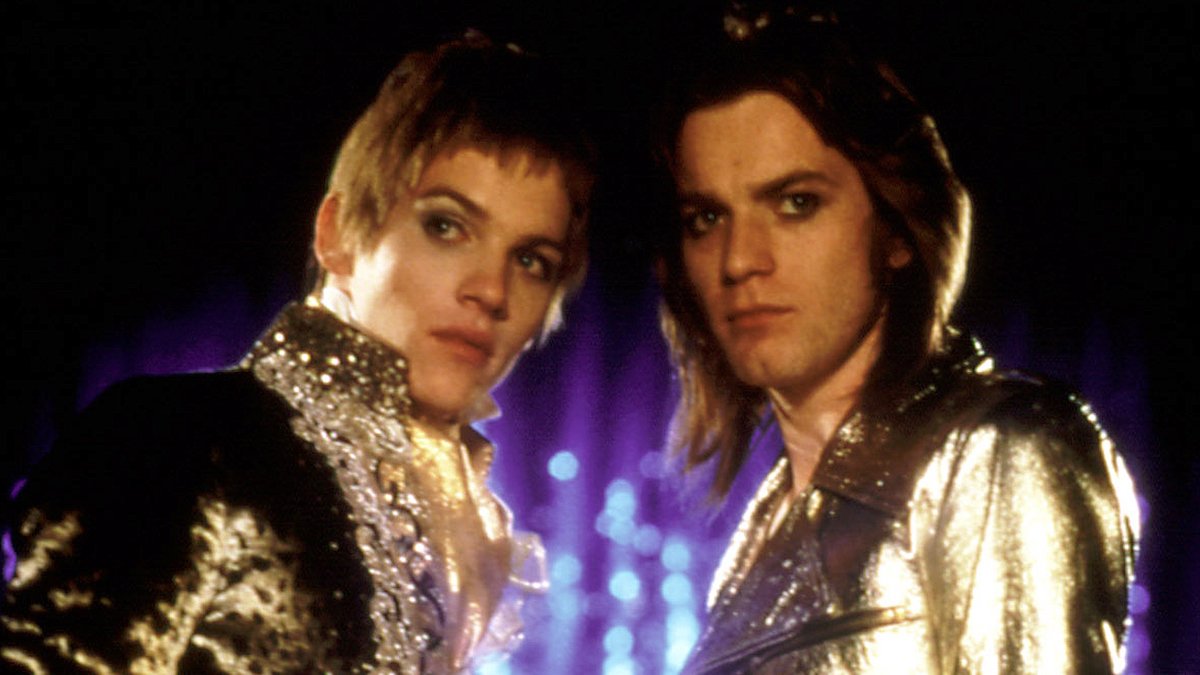 It’s always fun when you can tell a movie wanted to use particular band’s music but weren’t able to get the rights, so they just used soundalike songs. Bonus points if they went the extra mile and assembled a hell of a cover band (made up of British alt rock royalty no less) to take on some of glam rock’s biggest hits. It’s partly for this reason that Velvet Goldmine’s soundtrack is both a beast and hidden gem amongst other, more-discussed film soundtracks. It’s like the soundtrack was made with two different generations in mind yet, somehow, it bridges the gap between young viewers seeking rad new music – all the better if heard in a movie that features taboo subject matter – and older audiences who grew up listening to rock stars like David Bowie and Iggy Pop and heard firsthand all the legends and rumors surrounding them.

To go into more detail, Venus in Furs (the supergroup cover band in question) is made up of a who’s who of Britpop godfathers. Andy Mackay of Roxy Music, Thom Yorke and Johnny Greenwood of Radiohead, Craig “Clune” McClune of David Gray’s band, actor Jonathan Rhys Meyers, and Bernard Butler of Suede make up the band. The group’s name is borrowed from a Velvet Underground song, so you know their heart was in the right place when they put their new twist on classic art and glam rock. The handling of the vocals by Thom Yorke mostly channels Bryan Ferry of Roxy Music, which makes sense since most of the songs the band covers are originally by Roxy Music. Though I feel like the music parodies the era of music in which the movie is based, there is some sincerity in the way Thom and company handle it all. It’s the influences of glam and art rock that shine through on Venus in Furs’ cover of “2HB” by Roxy Music. Thom bellows and wallows like Bryan giving his all in the original version. Jonathan Rhys Meyers ended up handling the vocals for two other covers of Brian Eno’s “Baby’s On Fire” and “Cockney Rebel Tumbling Down”. Though not really imitating Brian’s vocals or Steve Harley’s vocals, Jonathan sticks to exaggerated pushes like Thom and goes for just as much of a tribute to the genres, putting the listener in the mood for nostalgic memories of late night record-listening and daydreaming of starting their own band.

Shudder to Think gets the chance to channel some glam rock vibes as well, with the members even being told to hew as closely to David Bowie as legally possible when writing their original tunes for the movie. When you hear these songs in the movie and on the soundtrack, you forget that you’re watching a fictional story about folks who lived through all of it. Shudder To Think’s work flows throughout, substituting perfectly for Bowie and his music in the world of the film. With tunes like “Ballad Of Maxwell’s Demon” and “Hot One”, it almost feels like Bowie secretly wrote the songs and handed them to the members of Shudder to Think to pass off as their own. Funnily enough, despite Bowie ultimately deciding that he didn’t want to be included on the soundtrack, his production work and backing vocals can be heard on Lou Reed’s “Satellite of Love”: even though Bowie may not have had a hand in the film itself, his soul and art are deeply embedded within Velvet Goldmine‘s essence.

All in all, the music of Velvet Goldmine is in and of itself a superb little time capsule created by a band that went above and beyond in capturing the sound of 70s. Their love and passion for the music and subject matter shows throughout the whole film, and the songs always pop up at the right time and stick with viewers long after they’ve watched the movie. If you’re ever in the mood for some crunchy art jams and got a fix for glamorously-glittery guitars, Velvet Goldmine‘s soundtrack has got you covered. 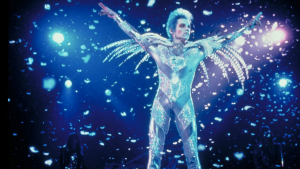