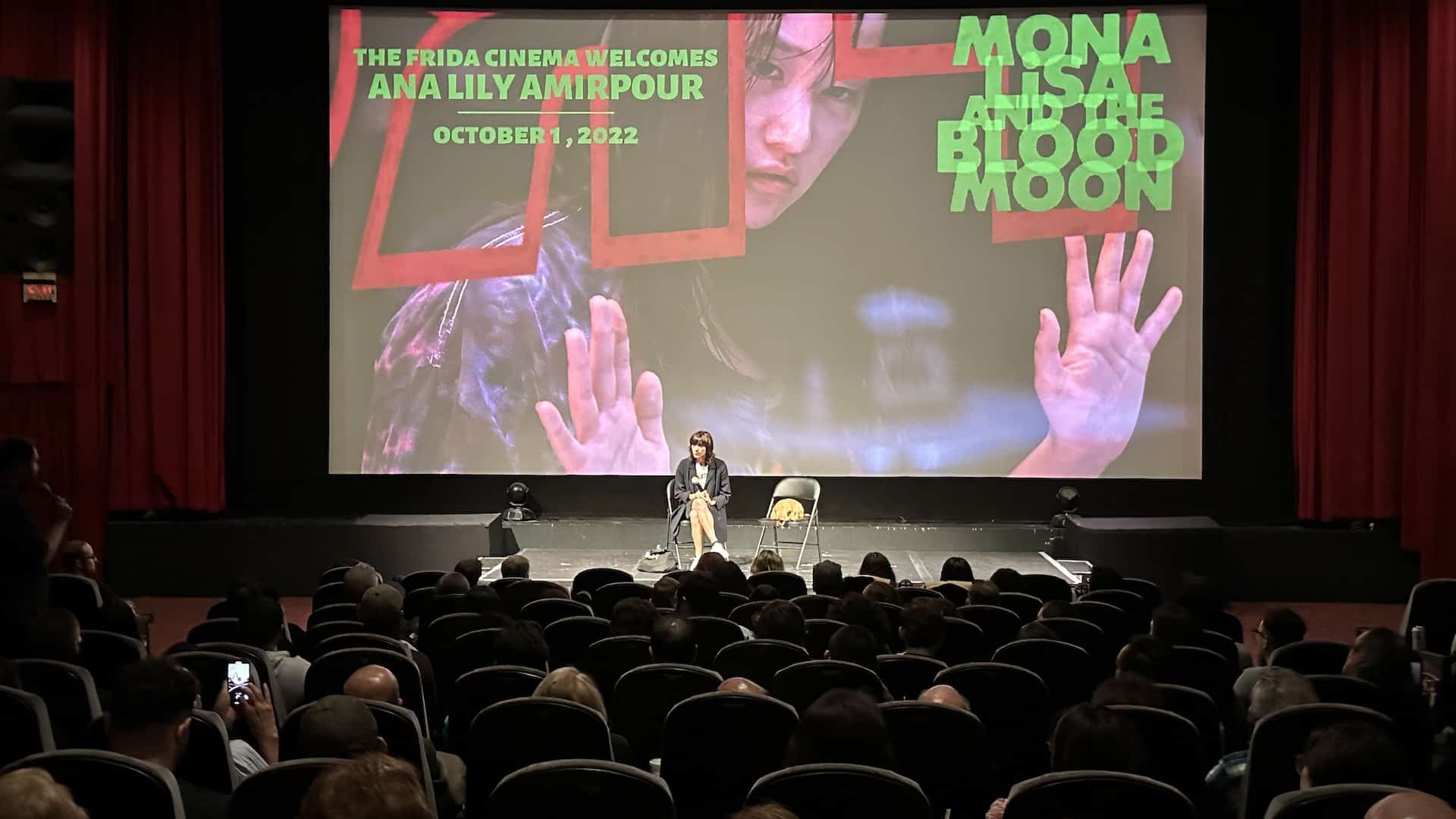 October is always a big month at The Frida and this year is no exception, with classic horror films like Frankenstein, Night of the Living Dead, and David Cronenberg’s The Fly playing at our theater or our various pop-up cinema events. But it was a new fantasy thriller, Mona Lisa and the Blood Moon, that kicked the month off. Directed by Ana Lily Amirpour, the film is her third after the “Iranian vampire Western” A Girl Walks Home Alone at Night and the dystopian cannibal romance The Bad Batch. Both films played at our theater during their initial runs in 2014 and 2016 respectively, so it was only natural that her latest film grace our screen. However, Ana did us one even better by coming on out to The Frida for a post-film Q&A after the evening screening of Mona Lisa last Saturday, giving us that extra bang the first day of October warranted.

Reflecting the anticipation for Ana at our theater, over 150 people turned out for the event. This considerable crowd included first-time Frida patrons, theater staff (such as yours truly), and even members of Ana’s family. A lot came early, with many seats already filled 15 minutes before showtime. Between hanging out in the lobby and helping behind the counter, I talked to a lot of guests and felt a definite excitement among them. Many were convinced fans of Ana’s since A Girl Walks Home Alone, and it showed in the enthusiasm in the air. Busy nights at The Frida like this can get a little hectic but those of us behind the counter were pleasantly surprised by the orderly way in which it unfolded: guests trickled in at a steady rate and were polite and understanding when ordering tickets and concessions. In a way, it felt like they knew we were just as excited as they were and wanted to help make the night a good one.

Our guest of honor (accompanied by her dog, a friendly Chiweenie named Benny) also arrived early, with Ana giving an intro to not only Mona Lisa but Predator as well. A favorite of hers, we happened to be playing it in the other theater and she eagerly sat in on it after Mona Lisa started. She managed to catch a good chunk of the movie before heading back over for the Q&A, diving directly into a dialogue with the audience about her film. The questions ranged from the analytical (“What motivated you to set the film in New Orleans?”) to the amusing (“What kind of snacks do you like to eat while watching movies?”), but Ana answered them all with a mixture of insight and humor. Touching on the theme of Otherness in her films, she explained that being the Other often inoculates one against the dangers of groupthink, or falling in line with what everyone else says or thinks. She also drew attention to the current crisis in Iran, where citizens protesting the killing of 22-year-old Mahsa Amini for wearing hijab “improperly” are now facing brutal repression by the government. Noting that many in the audience were also Iranian and thus aware of the situation, Ana’s comments served as a timely reminder that what’s merely dystopian fiction for some of us is a grim reality for others.

As the night wound down, Ana wrapped up the Q&A by asking if anyone could answer a trivia question about the film. A number of hands went up and the first person she called on knew the answer, with her presenting them a copy of her Girl Walks Home Alone graphic novel adaptation as a prize. But she didn’t leave the stage right afterwards: instead, she stuck around to meet and greet with fans, signing merch and taking pictures well after the event officially ended. Some got their tickets signed, while I was lucky enough to get my Girl Walks Home Blu-ray signed and personalized by her. As the crowd cleared out, I was able to catch some of their raw reactions to Mona Lisa. The response was overwhelmingly positive, with some comparing it favorably to her previous films and one even saying they wanted to watch it again already. Given the sizable crowd (again, 150-plus), I think it says a lot that everyone I spoke to came away with positive feelings about the movie.

It’s only been a week, but there’s already chatter about the possibility of Ana returning for another engagement. Girl Walks Home has played a couple times at our theater over the years, so it would probably be easy to organize an event around. However, The Bad Batch hasn’t screened here since its initial release, so that could make for an interesting Q&A session as well. Whatever ends up happening, I expect The Frida to once again greet Ana with the same warmth and enthusiasm that it showed for her and Mona Lisa and the Blood Moon this past weekend.