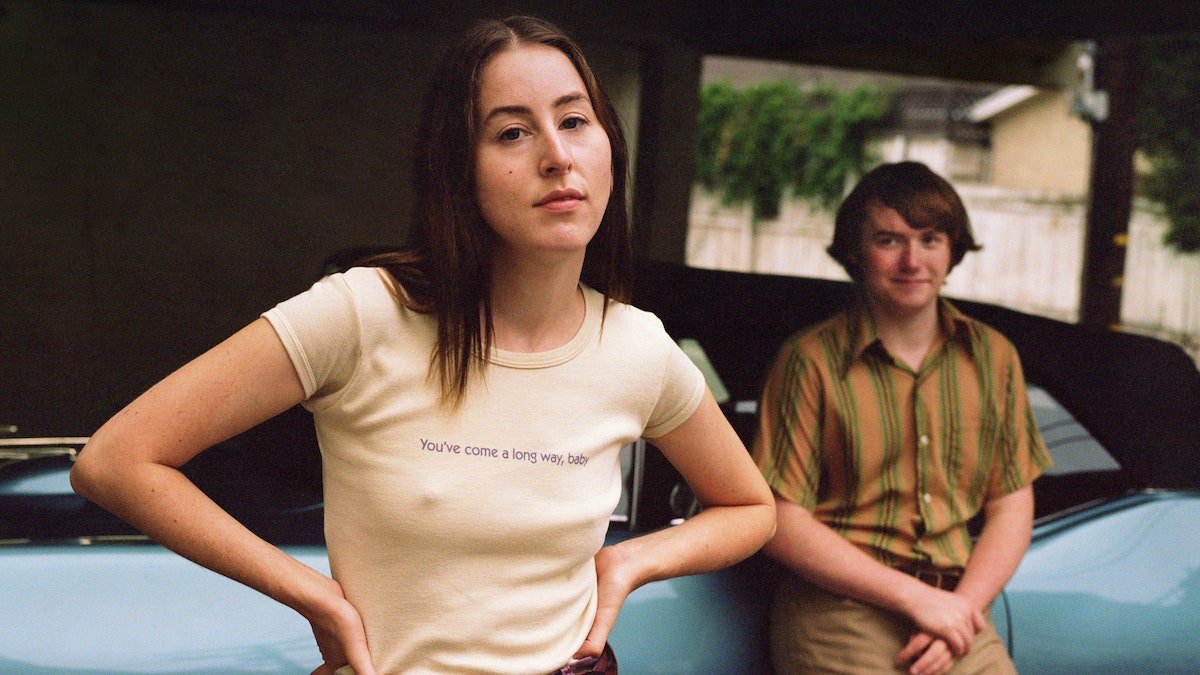 LICORICE PIZZA: Finding The Sweet Spot In A World of Moral Grays

The following is a guest article by Frida volunteer Dani Leard.

Licorice Pizza is a sweet slice of cinema that’s seriously been missing in the pandemic era of film screenings. Finally, you can step into a theater, not just to see a movie, but to be part of a shared experience once again.

Premiering with both commercial and indie acclaim, Paul Thomas Anderson’s latest film—the first in four years, since 2017’s Phantom Thread—once again displays PTA’s strength in snapshotting an era and creating a unique immersive experience. Anderson invites the viewer back into San Fernando Valley to come of age in 1973. Showcasing bites of both the sweet and spicy, the antics of this tumultuous and freedom-driven period in American history are put on display. Bright blues paired with dynamic daylight make it easy to live in this colorful world alongside the characters; you can almost feel the sun on your face and the wind in your hair.

The principal characters are 25-year-old assistant Alana (played by Alana Haim, a member of the band Haim alongside her two sisters, who also make appearances in the film) and a 15-year-old up-and-coming actor named Gary (played by Cooper Hoffman, son of the late Philip Seymour Hoffman, of whom Anderson often worked with). Intriguingly, this film marks the acting debut for both of these actors cast in the lead roles.

Licorice Pizza has that delicious blend of hearty substance along with all the exciting toppings that’ll fill you right up: captivating cinematography, well-directed lighting, detailed set pieces, and miscellaneous charms that make the world feel lived-in. It’s a mesmerizing theater experience that many moviegoers haven’t had since 2019. I promise, you will walk out as I did: on a high, riding that wave where the energy of the movie sticks with you way after you’ve walked out of the auditorium.

Jonny Greenwood returns with yet another fantastic score to help enhance the viewing experience, following his normative method in presenting a score that might first appear contrastive to what’s happening on screen, only to evoke emotions that otherwise wouldn’t arise. Not to mention the soundtrack, which despite the perceived differences in track choices, effortlessly births cohesion through the likes of David Bowie, Nina Simone, Sonny & Cher, and Taj Mahal.

The audience follows these dual protagonists come of age on intersecting paths, with a marked backdrop of historical and sociological themes. A driving plot point, for example, incorporates the oil embargo spurred in the Yom Kippur War that resulted in extremely steep gas prices. Moreover, PTA employs an unstated interpolation of social exchange theory: the idea that human behavior thrives because people will continue to behave a certain way if they perceive that they will derive some benefit from a situation.

Anderson’s screenplay does not shy away from employing this type of worldview. The main method in which this manifests is by depicting some otherwise somewhat eclipsed materializations of discrimination: casual racism, covert sexual abuse, and state-sanctioned homophobia (specifically for white gay men). It’s a lot. But it isn’t the focus. Consistent with Anderson’s past work, his portrayals of moral grays—and, straight up inarguable immorality in these cases—are not explicitly condemning of those actions. Due to the largely lighthearted nature of the film, it’s more than likely that people with misogynist and/or racist viewpoints can laugh along at some jokes for the wrong reasons. My friends and I noticed this in our viewing experience. There’s just something that feels a little bit off about a theater filled overwhelmingly with white people laughing at a white man portraying an offensive “accent” of two Japanese women (who briefly appear as the longest scenes with people of color in the film). The same could be said for some blatant forms of covert sexual abuse that is again played for laughs, like a certain scene in a van with Bradley Cooper’s character Jon Peters.

There are arguments to be made for how these jokes accurately portray the time or how there is an element of self-awareness (for example, the Asian women are not the butt of the joke, but the white man). However, the viewer has to ask themself if the subtle discrimination really adds anything to the movie, and if so, could it have been presented in a better way?

There is another implicit conflict of the story that seems to go untalked about.

There is a 10 year age gap between our two leads: one being a minor. There are a lot of arguments back and forth on the subject matter, and interestingly nearly none of them are shown in the film. A difference in age when the characters are this young does warrant some discussion; there is a power dynamic issue, intentional or unintentional, of a teenager’s developing brain versus a 25-year-old’s fully developed brain.

It’s unfortunately quite normal for older men to be matched with younger women in the world of cinema. A 20 or 30 year difference is hardly spotted to be an uneven match. In contrast, compare this with Licorice Pizza: an age gap between an older woman and younger man somehow provokes an entirely different attitude. What would be otherwise seen as immoral is laughed off as a joke, or any awkward situations are kept at bay on surface levels. There’s a source for this difference. Our culture portrays male dominance as the norm, so anything that deviates or directly contrasts is at the very least, a spectacle—a spunky plot, in this case.

An important note in the gender dynamics of age gaps is the difference between reinforcing the oppressive social structures we live in (men over women) versus challenging them (women over men). The script, if chewed on, has a culture-wide implication. But, at the same time, the focus of this movie is really zeroed in on this 15-year-old kid and a 25-year old woman. Even more interestingly, the age gap in real life between the actors is actually bigger than in the movie (12 years) and Hoffman was more than likely to be underage during filming.

Some food for thought: there would undoubtedly be a conversation around power dynamics portrayed in this movie if the genders were in their conventional roles. How did we decide this movie is any different?

The answer is for you to decide.

Commenting on a film’s flaws does not mean the entire production is unwatchable or abhorrent. Nothing of the sort. Viewing the film with a more adept perspective in mind might just enhance the viewing experience, by searching for themes that might otherwise go unnoticed. You’ll walk out having more to think about and more to talk about beyond its carefree stylization.

I can’t wait for you to bite into Anderson’s Licorice Pizza, to savor it and chew on it. See it multiple times, and take what you need. It’s one of those movies that makes you feel alive and see the beauty in life on one day, yet gives you a glimpse at political and social underbellies on another day.

Ultimately, this was undoubtedly one of my favorite viewing experiences of 2021. There are a lot of valuable undertones present in this film. Enjoy time traveling not just to 1973, but to warmer days to escape our current winter plagued by daylight savings. Just keep an open eye and open ear, because despite how it seems, it’s not all sunshine and blue skies in San Fernando Valley. There is more to discuss about this movie than the technicalities, the spectacle, or the romance. Anderson executes one of his strengths once again by creating a whole world: a world with beauty, and a world with flaws.

Taste Licorice Pizza. It’s all about finding the sweet spot in Anderson’s world of moral grays. 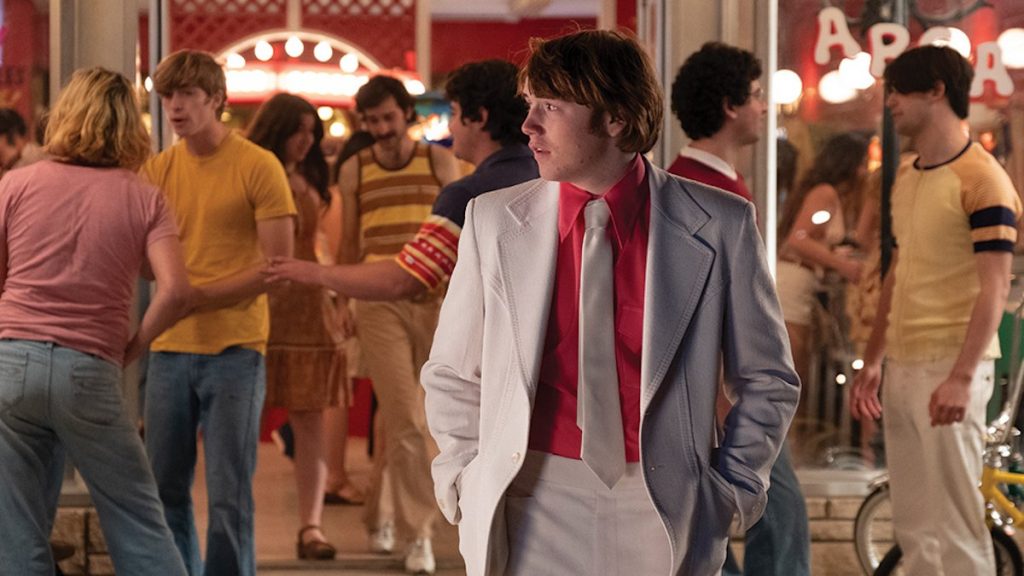