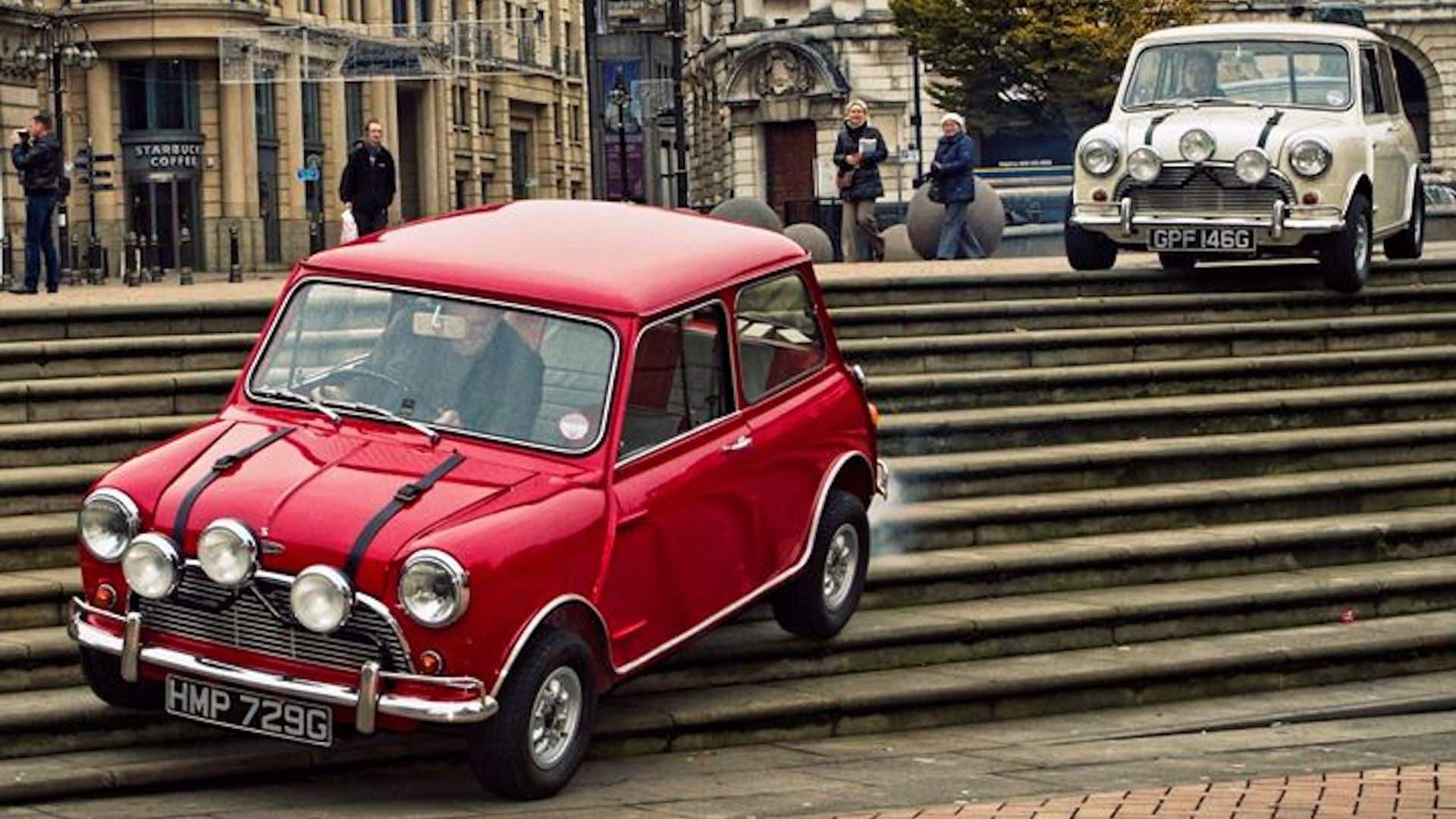 The British Invasion started with The Beatles coming in hot. Thousands of screaming teenage girls couldn’t get enough of the four boys with their matching haircuts and suits marching through the halls of some of America’s most famous concert venues and stadiums, playing their tunes and bopping their heads. It was at the height of it all that more British imports started making their way to the States. Bowie, The Kinks, The Who, The Animals, The Zombies, The Hollies, The Rolling Stones, The Yardbirds, and many more got their hands on American eardrums. Those sounds influenced the music here, the fashion influenced the styles, and the attitude influenced the population.

Throughout this war on pop culture, many films worked their way into theaters that would help set up the larger counterculture influence that the British would have upon American culture. The swag, style, and rocking soundtracks kept kids running wild in the streets wanting to be just like the “heroes” in the films they saw. Highlighting five of these films will hopefully help clarify the influence the British had on America during their most successful invasion. 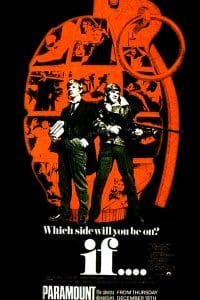 Before Malcolm McDowell was widely known for his antics as cheeky psychopath Alex DeLarge from A Clockwork Orange, he got a kickstart and a little practice playing Michael Arnold “Mick” Travis in Lindsay Anderson’s cult classic If….. Throughout the movie Malcolm’s character Mick pushes his many levels of rebellion and anti-conformist attitudes to their breaking point, forcing all kinds of madness to spill out across the screen. Mick tries his best to keep a lot of his urges in control until it all blows over and he is ready to take down the hierarchy that oppressed him and his friends for years.

The movie itself is a testament to the battle that still rages on within the public school system and how it isn’t used for education so much as a place to teach students obedience and to follow in the footsteps of their working-class parents. If…. was a good example of what was to come regarding British filmmaking and its depiction of the youth culture rising up. For me, though, it’s a great movie throwing a few interesting ideas of and social commentaries that were brewing at the time. The violence depicted in the film isn’t on the same level as A Clockwork Orange, but it did start the trail to the trend. It’s a good starter film to throw on after listening to a few Bowie records after a long day of working for the man. 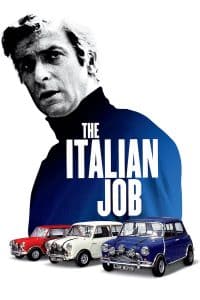 Michael Caine was the king of cool during the ’70s and this is where it all started… for me, at least. The Italian Job sees Caine playing Charlie, a recently released career criminal looking to get in a new heist under his belt with his fellow crooks after being out of the game for a long while. Of course, things don’t go according to plan with the heist, per the norm, and things go wrong from the start with Charlie losing his partner due to the Italian mafia wanting to nix the heist.

It’s montage after montage of buildup to the heist, traveling to the heist, and the heist itself, which goes on for as long as possibly a real heist would go, with twists and turns that lead the group to what is possibly one of the best cliffhangers in all of film history. It’s a gem amongst the onslaught of British films that came to the U.S. after the start of the British music invasion, and it is certainly one of the many that always seems to pop up on many folks’ and publications’ top films of all time lists. Adding it to your watch list would be a good idea as to get in some more of the vibe that was following through to the ’70s and early ’80s with the continuing British Invasion. 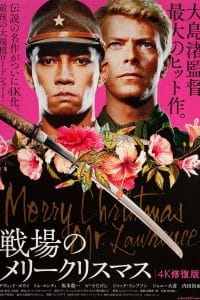 This little arthouse sweetheart starring David Bowie was a shift in the way war was depicted onscreen. A strong and open narrative of a love story between prisoner and captor without all the forced sexual tension. I included this one due to it being one of Bowie’s greatest performances, next to his work on The Man Who Fell to Earth and Labyrinth.

Now as for the story, it’s told through the perspective of Lieutenant Colonel John Lawrence (Tom Conti), who brings forth the world of P.O.W. soldiers and the Japanese soldiers who watch over them and keep them under control during their time as POW soldiers. One particular soldier is brought in, known by the name of Major Jack “Strafer” Celliers (Bowie), and catches the eye of the camp’s head general, Captain Yonoi (played by composer of the film and member of Yellow Magic Orchestra Ryuichi Sakamoto), who connects with Celliers through his unwillingness to be pushed and broken by the harsh treatment brought upon himself and the soldiers by the camp’s hosts. While the story unravels itself, we learn of Celliers’ past, what brought him to enlist, and how he became the way he was due to childhood choices that led to his younger brother facing harsh bullying over his hunched back. Merry Christmas Mr. Lawrence is a touching love story that deals with more than just what it means to be affectionate to one another and how it can break you away from your own responsibilities as a soldier or even a leader. 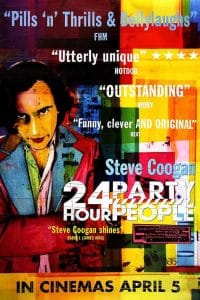 Music, once again, is at the forefront of this movie. I feel like it should be included in the series as a late stage of the British Invasion due to the rise of the club and dance scene in the early ’90s. The early days of the British club scene alone is what made America’s warehouse dance party scene what it was and still is sometimes today. 24 Hour Party People focuses on the life of Tony Wilson (Steve Coogan) and his burgeoning punk label, Factory Records, and how it morphed into a dance and techno label that started the first real wave of rave and dance parties.

This particular film also touches on bands that would make up a lot of what was considered goth culture, including but not limited to Joy Division, New Order, Cabaret Voltaire, and The Durutti Column. The movie weaves through fact and fiction, mentioning vast amounts of British punk, goth, post-punk, and techno music history with emphasis on the influence Tony had on music culture. From Tony witnessing The Sex Pistols’ first show with the likes of Simply Red’s front man Mick Hucknall, Mark E. Smith of The Fall, Morrissey, and Joy Division in attendance to the infamous signing of Factory Record contracts in blood, 24 Hour Party People is a good movie to put on if you want to see more history of the Brits’ musical journey through the world. 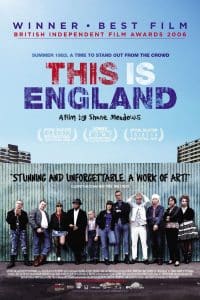 On the opposite end of the music map of Britain, we have This Is England. The focus of the film sticks to a combination of new wave, goth rock, ska, and reggae culture during the early ’80s. The movie focuses on an English youth by the name of Shaun (Thomas Turgoose) who is looking to fit in with a group of apolitical skinheads who befriend him after seeing him walk the streets after an altercation with some other boys from his local school. Shaun eventually immerses himself in the skinhead culture that takes him from the apolitical and anti-racist side of the sub-culture to its heated and racist side, all while still trying to figure out his place in the world as the son of a widower and a fallen soldier of the Falkland Wars.

This Is England shines a light on more history of the British music scene that would keep its finger on the pulse of the world’s musical journey. The increased acceptance of a lot more than just Britain’s white culture and working together to break down racial barriers created by the parents of British youth showed that the working class was no longer run by the bigots and prejudice that was a part of the culture beforehand. Ska music, in particular, helped to build a strong bond between kids of different races and cultures, which This Is England focuses on heavily. This Is England is a good movie to fill in the blanks left by some of the movies in the British Invasion series, and I highly recommend it for those who want to see the counterculture that was started by The Sex Pistols and still continues to this day, thanks to its heavy influence on American music and culture and world music and culture as a whole.

With that, these are the movies I would recommend to those who wish to find out more about Britain and its influence on the worlds of music and pop culture. There are a few more movies I wish I could have included, which I will mention for future reference for those interested, but this is basically my continuation guide to our British Invasion series. As for the movies I would also recommend that I haven’t watched myself but heard are good examples of what Britain had to offer for its music and culture, I would recommend Beats, which focuses on two buddies from Scotland navigating through the dance and rave culture of the UK in the ’90s, David Bowie’s 1973 concert film Ziggy Stardust and the Spiders from Mars, which goes into further detail of Bowie’s Ziggy Stardust persona, and Control, which tells the story of Ian Curtis, front man for Joy Division.
Hopefully with these recommendations, you can see why the British invasion was such a big deal when it happened and why it still has a hold on us to this very day.
Facebook
Twitter
LinkedIn