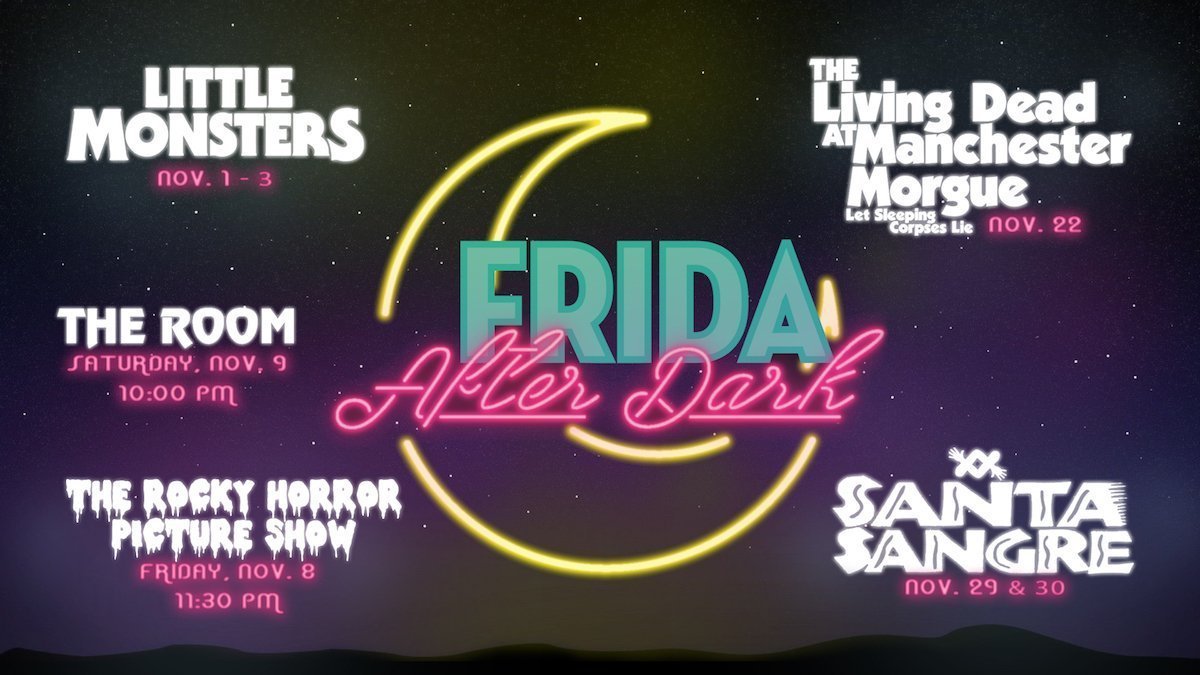 Stop me if you’ve heard this one before: a failed musician, a children’s television host, and a kindergarten teacher and her students walk onto a zombie-infested farm…

No? Well, you’re in luck! Abe Forsyth’s Little Monsters is just the kind of oddball delight we love to screen here at the Frida. And no, this isn’t the 1989 kids movie starring Howie Mandel as a horned trash-ghoul living under a tween Fred Savage’s bed (though that would be a good fit as well.) Forsyth’s film is a brand new, international co-production between the US, the UK, and Australia starring Academy Award winner Lupita Nyong’o, who’s steadily becoming a queen of the horror genre.

With a film that’s been dubbed “Zombieland meets Kindergarten Cop”, it’s hard not to be intrigued. If you’re a fan of gore, rom-coms, and black comedy, this film is a triple threat! The Hulu original follows the lovely teacher Miss Caroline (Nyong’o) and Dave (Alexander England), a failed musician on the rebound, as they take a group of kindergarteners on a field trip to a nearby farm – a simple task made dire when flesh-eating zombies escape from a nearby government test facility. Surviving a zombie invasion is already stressful enough without a gaggle of children, so it’s up to Caroline and the others to keep the kids (and themselves) from becoming zombie-chow with, hopefully, as little trauma as possible. Even the biggest of zombie lovers can admit that the latest apocalypse flicks can be pretty predictable, which is why Little Monsters is such a treat. It not only surprises but leaves the cockles of your heart just a little more full and your frown turned upside down.

Another month brings another stellar production of Jim Sharman’s The Rocky Horror Picture Show, the original interactive midnight movie! We’re always delighted to host the very talented and dedicated K.A.O.S. shadow cast as they turn Friday nights up with their lip-syncs, sexy costumes, and performances that bring you right into the exhilarating world of Dr. Frank-N-Furter’s castle.

Rocky Horror is a mish-mash of campy science-fiction, brilliant songs, cheesy wordplay, and unapologetic sexuality that just might awaken something in you. Along with being fun and wild, these screenings are about community and the freedom to be yourself! Costumes are always deeply encouraged, so put on the best Transylvanian duds you’ve got and bring along your friends for an awesome night out.

Don’t forget to bring cash to buy your prop bags before the show! For just a few bucks, you can have plenty of ammo to throw, while also supporting K.A.O.S. in helping improve their costumes and stage gear. If you’re a Rocky virgin, don’t get hot and flustered! Check out this classic guide for what to expect when going all the way with us at midnight.

Special note: last month’s encore October performance was completely sold out, thanks to all of our fang-tastic party guests’ support and continuing Rocky spirit! If you missed it and are feeling the withdrawal creep in, make sure to get your tickets early and join us over at the Frankenstein place!

Right after cleaning up all the confetti and popcorn from Rocky, we’re making a mess all over again with our monthly interactive screening of The Room — an absolute masterpiece of failure.

Unlike Rocky Horror, The Room is not a musical. Instead, it is a film so terrible in every conceivable way, it’s hard to believe even while watching it. Perhaps that’s simply the genius of the enigmatic Tommy Wiseau: director, writer, actor, producer, casting director, etcetera, etcetera.

Johnny (Tommy Wiseau) works as a successful banker in stock-footage San Francisco with his fiancee, Lisa (not Tommy Wiseau). Despite their engagement, Lisa is unhappy in her relationship and seduces Johnny’s best friend Mark (Greg Sister). Despite the simple premise, there’s several dozen unrelated subplots that make things far more entertaining and worthy of a monthly cult classic celebration.

Think you know how bad it is? You don’t! It’s much worse, and live screenings are all the better for it! There’s truly nothing like being in a theater full of strangers, bonded together by the same bizarre dialogue and pelting each other with plastic spoons. So what are you waiting for? Grab a football and make a date for Saturday, November 9th — just make sure to close the front door on your way out.

The Living Dead at Manchester Morgue (1974)

Didn’t get your zombie fill for the month? Good news! Picking right back up with the blood and guts after our monthly interactive screenings is Jorge Grau’s cult classic, The Living Dead at Manchester Morgue. Presented by our dear friends over at Horrible Imaginings (responsible for the yearly summer genre film festival and the newest October short film showcase), we’re celebrating the underrated horror flick’s all-new, glorious 4K restoration!

Grau’s take on the living dead genre is not to be confused with an installment in the iconic Living Dead series. Aside from its original Spanish title, No profanar el sueño de los muertos, the film has also been released under more than 15 titles internationally, including Let Sleeping Corpses Lie and Don’t Open the Window.

Regardless of what you call it, it has a clear, compelling premise. A vacation to Manchester goes wrong for the young George and Edna, who find themselves in the midst of a murder investigation. The trip goes far beyond inconvenience and into a fight for survival when a new pesticide alternative device’s ultrasonic radiation resurrects the dead. Soon the couple (as well as the police) are in a race through the surplus supply of crypts, morgues, and graveyards surrounding them to get out with their guts intact.With campy yet solid practical effects and a funky 70s soundtrack to boot, The Living Dead at Manchester Morgue is the perfect opportunity to see a classic undead flick in all its magnificence.

This year, Alejandro Jodorowsky’s provocative odyssey of blasphemy turns 30! So of course, we’re wrapping up November and bleeding into December with Santa Sangre’s all-new 4K restoration that presents every hauntingly beautiful frame crystal-clear.

How would one describe Santa Sangre? Jodorowsky’s drama-thriller-slasher plays like a Buñuel remake of the entire Psycho tetralogy with the ambiance of Tod Browning’s Freaks and is truly the stuff of Freud’s dreams.

The film follows the life of Fenix, a young man born and raised as a performer in a macabre Mexican circus. The son of an adulterous knife-thrower and cult-leader aerialist, the boy’s life is filled with violence and misery, which comes to a head with the bloody loss of his mother’s arms. As the years go by, the two become partners in act and in crime and grow far too close, leading Fenix to lose himself to her in more ways than one.

Though a Mexican and Italian co-production, Santa Sangre is in English, with the dubbed audio and slightly off lip movements only adding to the film’s ensnaring eeriness and unsettling aura. It’s definitely a film not to be spoiled beforehand, so come see a marvel of avant-garde filmmaking for yourself on the big screen — if you’re not faint of heart, that is!

As 2019 wraps up, there’s only one more Frida After Dark left before the decade ends! Check in next month for a whole new line-up of too-hot-for-daytime screenings. Stay tuned, and see you then!