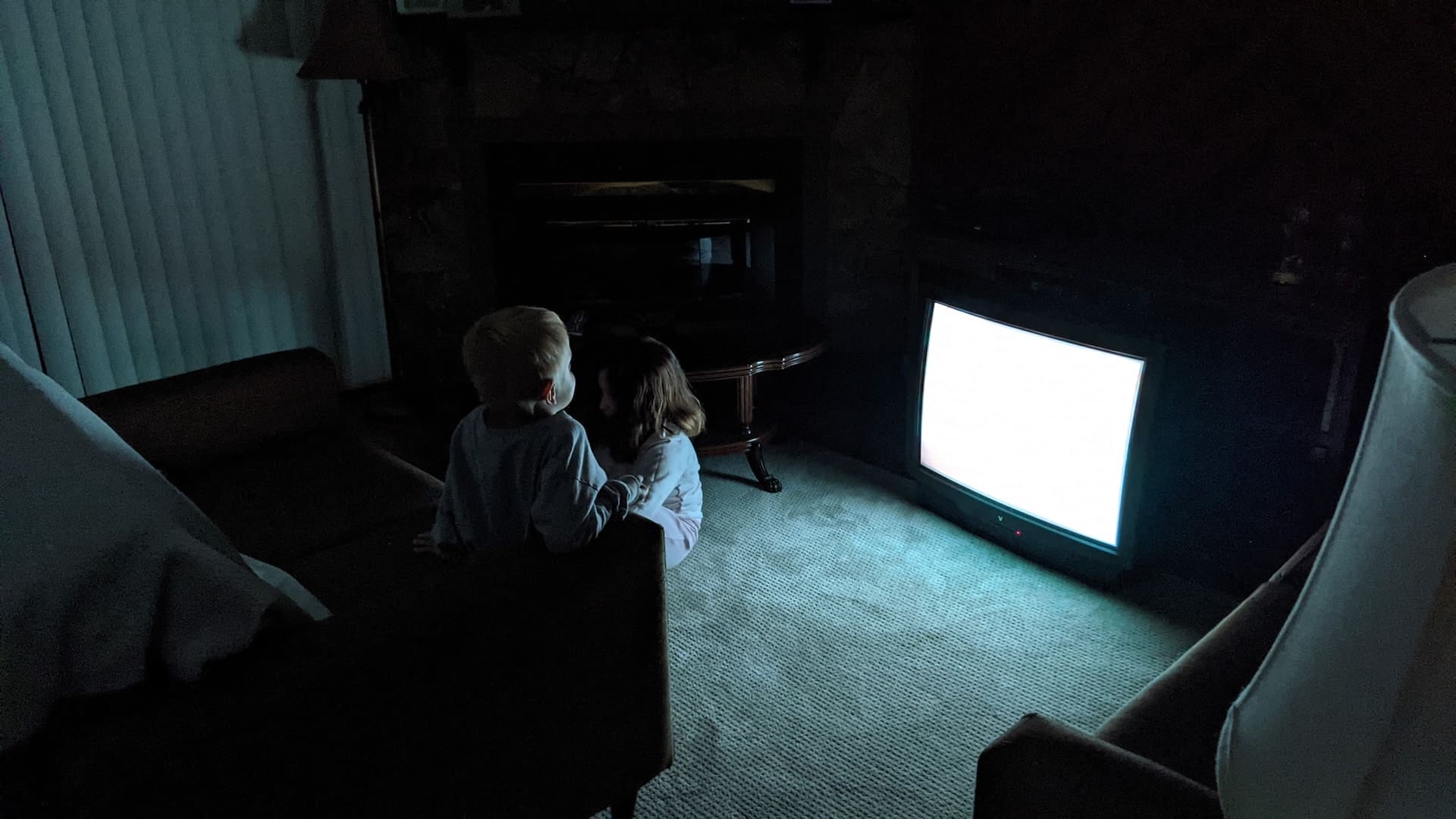 Skinamarink: Under the Bed

“A dream is a disguised fulfillment of a repressed wish.”

– Sigmund Freud, The Interpretation of Dreams (1899)

This world can crush you. A certain moment comes when you reach the apex of this often-consistent realization. A usual method in treating pains of the present is to reprieve it with comforts of the past. To deduce why we are more likely to be drawn to our pasts than our current lives doesn’t necessarily require a Freudian level of psychoanalysis, for as akin as it is to a sort of universal truth, the more we are collectively exerted into an unknowable future, the less certainty we feel in reacquainting ourselves with the pleasures we once felt in spades.

The permeation of nostalgia in mass culture isn’t anything new, but its newness comes ever so shifting with the tides and phases of each passing day. It has accommodated to us since we first learned to recollect, and just the mere act of it has since become a key essential to our neural interlinking of pleasure and nostalgia. Whatever we’re experiencing now could never possibly be surpassed by the experiences we once had, so why bother “living in the now” when you can just dream your way into what life used to be? Not an inch of doubt creeps into your head as you surrender to your subconscious, and your brain conjures images and patterns you recognize without error. You are no longer an adult but the child you thought you lost forever; the pain has gone away and taken the form of innocence and ignorance. The only tangible thought in your head remains a question: what if I stayed?

Kyle Edward Ball shot Skinamarink — his mesmerizing feature debut — in his childhood home in Edmonton, Canada. It takes only until its opening frame — the fuzzy floor of a house belonging to a father, who is guiding his two children into their bedroom — to recognize a keen sense of spatial familiarity. The film is told almost entirely in frames like this. Distinctly anamorphic, heavy on negative space or abstraction of the house’s rooms and corridors, and static yet kept alive by the analog-like grain of Jamie McRae’s cinematography. This often recalls the look of a digital camera with its ISO over-cranked to a near-breaking point. Visual noise dominates every single image in Skinamarink, especially when they’re at their darkest, and whether you can make out something lurking within the crevices of that dark is entirely up to you, the viewer. Ball’s approach is substantial in its confidence, evoking a found-footage sensibility through not just its visual style but also the experimental low-frequency sound design that muffles and filters the voices of its characters to the point where subtitles are implemented, slowly and painfully warping its space of comfort into one that is alien and vast enough to never reach an end. These visuals and noises, which sound as if they’re dripping from the ceilings of the house, lend a potent feeling that at its most comforting recalls being underwater and at its most endangering, being suffocated.

One of many things that helps to set apart Ball’s film from the ever-evolving pyramid of contemporary horror is its simplicity on the surface. In the year 1995, Kevin and Kaylee, the two aforementioned children, wake up in the middle of the night to realize their father is nowhere to be found, and the same goes for the doors and windows of the house. Trapped inside, they take to their living room TV, surrounded by scattered LEGO sets and illuminating the room with only the light of its screen. Too young to make sense of the situation but too aware to be unafraid, the kids become prone to the influence of another presence that awaits upstairs. 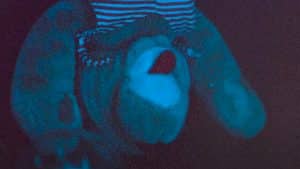 It’s a horror concept that should innately call for the essence of nostalgia, and while the film occupies it through its own idiosyncratic means, Ball uses a wholly unique style to speak far more on nostalgia’s behalf than your friendly neighborhood horror hound may expect. The only thing that would stop Skinamarink from being one of the most point-blank frightening films in recent years is that it is also one of the most heartbreaking. Regardless of whether you know the film’s house as being the one of his childhood, Ball’s writing and eye evoke a feeling that can only be reeled from the most personal of experiences. It’s only through his inclination for distorting and abstracting the elements on- (and especially off-) screen that a youthful tension materializes which otherwise would have remained forgotten and intangible, and it’s through his gifted ability to balance unspeakable horror with comforts of shared universality that the film transcends beyond a mere atmospheric exercise. We’ve all been young, and some of us may have been too young to have been awake at a particularly late time. Some of us may have had to get up from bed to use the bathroom at 3am, but upon first glance of the pitch-black hallway in front of you, you decide to hold your bladder until sunrise. And some of us may have once been too scared to move. Your mind jumping all around inside you as compensation for your body being unable to even flinch at what you can only imagine is just beyond the corner of your eye.

Part of what makes the terror of Skinamarink so effective is how it knows to embrace feeling less indebted to the films that it may remind you of and more so inspired by the individual schematics of what made those films work. Throughout Ball’s film, I thought most prominently about one of the earliest examples of the found footage genre — Dean Alioto’s The McPherson Tape, in which a UFO sighting and a subsequent alien takeover of a family’s cabin are captured via consumer-grade VHS tape, and in between both occurrences lies an escalation of panic that swells within the darkness of the cabin, wherein the grain of the camera tricks you relentlessly into seeing patterns and shapes that threaten to be something else entirely. It was also hard not to recall Daniel Myrick and Eduardo Sanchez’s The Blair Witch Project — a film whose importance to my own life stems just as prominently from its groundbreaking production as it does its harrowing descent into doom, both of which are yet again synthesized by Kyle Edward Ball into something totally new and bold and, like Blair Witch, was brought to life through bravely minuscule means (at a mostly-crowdfunded $15,000 budget).

But no concrete comparison is warranted here. Various writings from other critics heralding its once-in-a-lifetime status and its subsequent (and monolithic) word-of-mouth popularity following an online leak of the film during a virtual festival premiere have mutually drawn viewers into Skinamarink for what seems to be the same reason: nothing has ever come about that looks and feels so new and yet so familiar. It’s as if Ball transcribed a Boards of Canada record into visual format. With such a fusion of dreamlike flow and paralyzing childhood fear, Ball is simultaneously able to pull the rug from under our childhood memories, revealing the unintentional selfishness of the universal wish to relive them. This is to say that my opinion lies all within the incredibly fluid subtext of the film, which revels in its personal and minimalist environment enough to invite others to draw different conclusions. 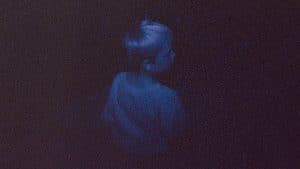 It is the opinion of this writer, however, that Skinamarink is the most effective and strikingly evocative piece of anti-nostalgia art since David Lynch’s Twin Peaks: The Return — specifically its final two episodes. In order to spare Laura Palmer from her untimely murder, Special Agent Dale Cooper performs the metaphysical feat of time traveling to her final hour, in which he is able to take her hand and guide her back home, and in doing so, creates a rippling chain reaction of an altered future. But her hand only stays for a brief moment, fading into nothingness and replaced with the echo of a distant scream. Desperate to course-correct, Cooper travels back into the present, in which he drives a waitress, who looks exactly like Laura, back to Twin Peaks and what he believes to be her childhood home, where it now belongs to someone else. The waitress looks at the house for a moment, hears her name, and plunges the world into darkness with a deafening scream. The self-involved hubris of Cooper’s mission inadvertently eliminates the world he tried to fix into nonexistence, and it is this notion that bleeds into the horror of Skinamarink. The fixation on childhood spaces, the abstracted comforts of home, and the longing for a world that was better when it made less sense all merge into a collective miracle of filmmaking that conveys the dream of being a child again as interminable abyss. As if the traumas and terrors of your present have been carried into that dream and now slowly infect it.

Ball, in a feat that is stunning alone as a debuting filmmaker, reveals his sensibility as one that is both sensitive and sinister, giving his story and characters enough space for us to realize that the luxury of nostalgia is never guaranteed to last, and that eventually, rot will find its way back in. The cartoons on TV will distort into silent static, the lights that kept you warm will blow out, and soon there will be eyes that you won’t recognize, staring back at you from a place you used to call home. These eyes will have a voice that calls for you upstairs. If you seek the comfort you lost, the voice will ask you to do only one thing: look under the bed.