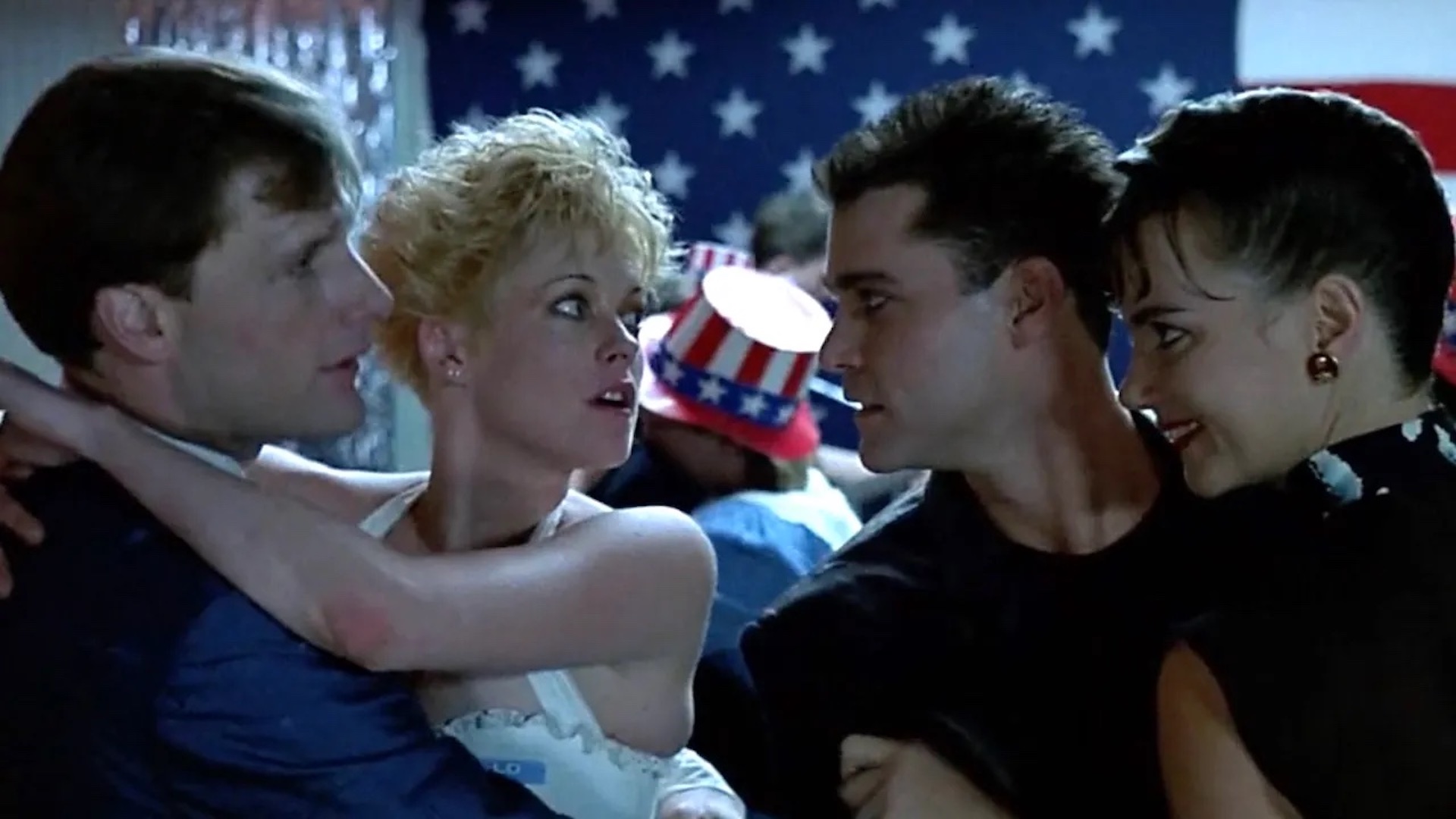 Jonathan Demme’s ceaselessly pleasurable Something Wild has been hiding in plain sight. It debuted to nominal fanfare in the fall of 1986, but by no means did it set the world on fire – the film won no major awards and hardly broke even at the box office. Yet with the ever-accumulating passage of time, a theme explored in the film, Something Wild has emerged as a foundational work of American cinema. A film noir in screwball clothing. A nest egg of visual and aural styles. A casual masterpiece from its director, which almost never happened.

Following an exodus at the famed United Artists film studio in the late 1970s, five of their most senior (and well liked) executives left to form their own company. The celestially named Orion Pictures demonstrated a cosmic, star-studded ambition to the industry, proving to be a major player in Hollywood throughout the 1980s.

Bankrolled by a $100 million dollar line-of-credit through Warner Bros., Orion attracted an impressive roster of talent in its early days using the same formula that worked at United Artists: let the filmmakers make the film; let the artists be artists.

“We’ve had some singles and doubles … [but haven’t] had any home runs,” said chairman and co-founder Arthur Krim during an annual meeting in 1984.

By 1986, a 15-percent stake of the company would be sold to Viacom in a bid to enter the home television market, signaling a move away from theatrical distribution.

That very same year, however, Orion Pictures would release the first of three films they’d make with director Jonathan Demme, minting a new star for their growing constellation in the process: a then-undiscovered, thirty-year-old Ray Liotta.

It seems laughable now to imagine Something Wild directed by anyone else, but in reality, Jonathan Demme was the runner up choice. After getting his first agent, the film’s screenwriter, E. Max Frye, was asked plainly whom he would like to see direct this screenplay.

“I said ‘Martin Scorsese or Jonathan Demme.’ And Scorsese was directing After Hours at the time, so they sent it to Jonathan. [Producer Ed Saxon] read it over the 4th of July weekend, and gave it to Jonathan, and Jonathan said ‘Hey! – I wanna make this.’”

Frye wrote the film based on an encounter he witnessed at a coffee shop: a hip, lower east side young woman was having a meet-cute with a Wall Street-ready young man. The image of these two together was food for the imagination to both him and Demme.

In stark contrast to his experience with his previous film, Swing Shift (1984), production on Something Wild was relatively painless. Shot during spring, the good vibes on set mingled with the congenial weather, perhaps contributing to the overall frisky tone of the film itself. If there was contention, it was in the casting of the Ray Sinclair character.

An icon of television and the silver screen, Ray Liotta passed away on May 26th, 2022, at the age of 67. He leaves behind a daughter, loved ones, and an overwhelming body of work that he was mostly proud of.

“There’s a couple in there that I’d rather not have done, but you gotta do what you gotta do,” he admitted on Marc Maron’s WTF podcast in 2018.

Having grown up in Union, New Jersey, Liotta often spoke of acting in highly practical terms – it was a gig like anything else. He earned an income from odd jobs growing up, preparing himself to either take over his dad’s chain of automotive parts stores or work in construction.

It wasn’t until his high school drama teacher urged him to audition for the upcoming play that Liotta would find a consciousness in acting and the arts. He auditioned for, and earned, the second lead in the theater’s production of Norman Krasna’s play, Sunday In New York. Though he didn’t particularly like the play, the experience empowered Liotta to major in drama when he started classes at the University of Miami. There, he cut his teeth performing in musical productions of classics like Cabaret, The Sound of Music, Oklahoma!, Dames at Sea, etc.

Six months after he graduated, Liotta landed his first credited role on NBC’s Another World, their highest rated soap opera at the time. The job lasted for a few years until Liotta’s character – nice guy Joey Perrini – was written out of the show in classic soap opera fashion: a recently widowed Joey Perrini begins dating his nurse, who turns out to the be richest woman in the country, and the two go off happily ever after skiing in Switzerland.

Ever the academic, Liotta continued to attend various acting classes post-graduation, even after he got the television job. In one of these classes, he met his future co-star, Melanie Grifffith, with whom he became fast friends. When Liotta was moving from New York to Los Angeles to be in films, Griffith switched apartments with him so that he’d have a place to stay and introduced him to her new acting coach, Harry Mastrogeorge.

Liotta immediately took to Mastrogeorge’s relaxed style of teaching, which contrasted sharply with the intense Stanislavski education he received in college.

“I did that for 12 years,” Liotta said. “The biggest thing is, he teaches you self-reliance.”

Some years after arriving in LA, when word got around that Griffith was recently cast in a feature film by a hotshot director at a mini-major studio, Liotta still hadn’t done any meaningful acting work. After failing to get an audition through his agent, Liotta reluctantly, but emphatically, asked Griffith again for her help.

Unbeknownst to him, the director and casting department on the film was split on who to cast for the role of Griffith’s husband – they agreed to see Liotta.

“We flew to LA, we were in New York. Trashed the offices at Orion – people coming in and putting their hands through walls, and kicking holes in the desks and everything,” says writer Max Frye of casting Ray Sinclair. “And I remember being in some cheesy motel on Sunset when Ray Liotta came in to read with Jeff Daniels. And it was just like WHOA … it was just, sparks flying.”

When Ray Liotta tells the story of being cast as Ray Sinclair, he often includes an extra detail about being at home after the audition. He’s watching Johnny Carson on TV, and who should be Carson’s guest at that very moment? Why, it’s Jeff Daniels, who Liotta had just met hours earlier. He watches for a bit, and then begins to do pushups while reading his lines and watching Daniels on TV – this came up in my research and just seemed wild to not include somewhere.

“I met a music editor, who was a new music editor,” Jonathan Demme remembers. “And the sparks just really flew between [music editor Susanna Parrot] and me. The next thing, we were talking about how thrilling it would be to score the entire movie with source music, to not have a composer, to rely on the music that would be heard on the radios. The band is playing a song at the reunion. This was back in the days when it did not cost a fortune to get the rights to put recorded music in your movie. That’s changed completely now, of course.”

Critical to Something Wild’s musical design is the deployment of the Troggs’ “Wild Thing” as a song cycle that recurs in different contexts throughout the film. The song itself has a beat that is listenable in repetition like this, but it also demarcates some of the narrative shifts that occur in the film. Even as it reiterates theme like a Greek chorus, the song is dynamic in its varying musical interpretations, ranging from salsa to reggae.

In spite of its evocative title, Something Wild leisurely takes the scenic route through the first half of its story. It asks you to look at Charlie Driggs and be charmed by Jeff Daniels’ performance of him; it asks you to look at Lulu and be smitten with Melanie Griffith’s portrayal of her; it asks you to look around the small towns that dot our interstate highways and be inspired by their compassion; it asks you to be satisfied with all of this first before even hinting at a plot, because the film knows that you – yes, you, the audience member. You! – have already seen this type of movie before.

What we are given in lieu of story are textural details and aesthetic impressions that suggest deeper histories outside the boundaries of this mostly vehicle-bound film. No wheels to reinvent here, just people, places, and things worth admiring, including a 1970 cherry-red Pontiac Catalina convertible, a white dress, a blue suit, a “Virginia Is for Lovers” t-shirt.

Historically, Jonathan Demme’s depictions of his odd couples – Clarice Starling and Hannibal Lecter in The Silence of The Lambs (1991), Melvin and Howard in [checks notes] Melvin and Howard (1980) – often acknowledge the existence of profound spiritual bonds between superficially “different” people. In the case of the neurotic Charlie and the mysterious Lulu, their attraction is almost certainly a product of their character resemblances – Lulu admires Charlie’s mildness, while Charlie perceives a soft center to Lulu’s intimidating exterior. Their dueling personalities and verbal repartee both anticipate and templatize the modern rom-com rhythms found in later films like When Harry Met Sally… (dir. Rob Reiner, 1989), Pretty Woman (dir. Garry Marshall, 1990), Before Sunrise (dir. Richard Linklater, 1995), or 10 Things I Hate About You (dir. Gil Junger, 1999).

Remarkably buoyant in its combination of genre conventions and screwball wit, Frye’s svelte screenplay is nevertheless upstaged by the remarkable image-making from Demme and frequent collaborator, cinematographer Tak Fujimoto. Their camera is almost constantly looking elsewhere in any given scene, foregrounding environments and ancillary characters as much as their two leads. This “rogueness” of the camera, in keeping with the promise of the title, shores up the film’s themes of surprise and concealment.

As a condition of cinema, looks are always deceiving. So, too, in Something Wild, a film about the power of stories and performance, in that, before we even meet them, both Charlie and Lulu have adopted their own characters – their own controlled versions of themselves – to play in life. The movie asks what happens when those characters are forced to reveal their fictions. Is there a claimable right to lying to a stranger? When does a stranger stop being a stranger? When does a romantic partner become a stranger? And who gets to decide?