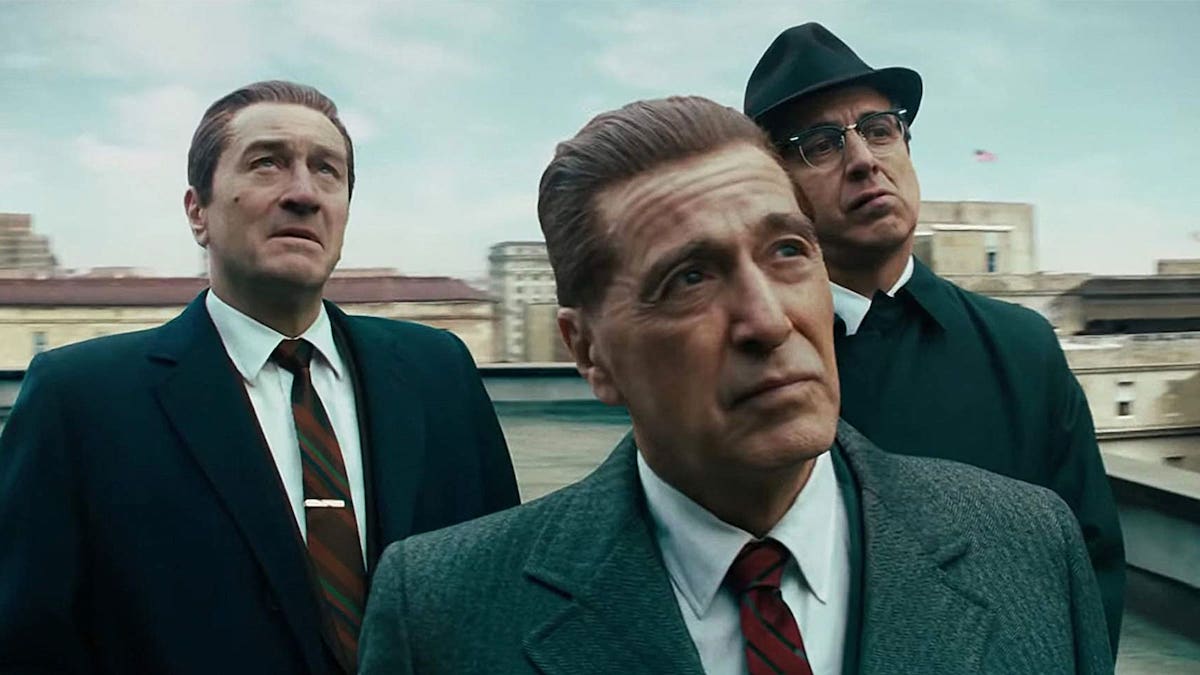 The Irishman: A Modern Scorsese Masterpiece

Martin Scorsese made a name for himself writing and directing realistic dramas like Casino and Goodfellas. At first glance, one might see The Irishman as just another gritty gangster movie, filled with Scorsese signatures such as Catholic imagery, familiar actors, and intense attention to on-camera details. However, Scorsese reaches new heights with this film, examining brotherhood, family, and coming to terms with one’s own mortality. It’s a melodrama beautifully realized by Robert De Niro, Al Pacino and Joe Pesci, three titans of crime cinema.

De Niro himself described The Irishman as “…a classic story about loyalty, about brotherhood and betrayal. But a betrayal for a reason that people can understand.” Said story is based on the nonfiction book I Heard you Paint Houses by Charles Brandt, a former criminal investigator. It chronicles the life of Frank Sheeran, a union driver turned hitman for the Bufalino crime family who also, supposedly, played a key role in the disappearance of teamster leader Jimmy Hoffa.

The film opens in the 1970s as Sheeran (Robert De Niro) drives his friend Russell Bufalino (Joe Pesci) and their wives to a wedding. The trip is accompanied by narration from Sheeran about his life with the mafia, from his chance meeting with Bufalino in the mid-50s and becoming an alleged established hitman to his complex relationship with Jimmy Hoffa (Al Pacino). Eventually they make it to the wedding when Hoffa suddenly disappears. When no trace of Hoffa can be found, everyone suspected of being involved with his disappearance either dies or goes to jail for unrelated crimes. After Sheeran is released from jail, he’s left to face the consequences of his actions as well as his own demise.

In order to capture a vast age range for the film’s main cast, Scorsese and cinematographer Rodrigo Prieto used CGI to de-age the actors. At first, many were concerned about how the actors would look, as other attempts at CGI de-aging in other films looked extremely fake. The moment the movies goes back in time however, you can’t help but be surprised at how much the main actors look like they did in iconic, earlier roles of theirs in movies like The Godfather Part III and A Bronx Tale. The CGI is seamless, with it making you forget at times that De Niro, Pacino, and Pesci are all in their mid-to-late 70’s.

Seeing De Niro, Pacino and Pesci act together in a Scorsese film is a joy for many who grew up watching their films. Funnily enough, Pesci hadn’t acted in anything for 10 years when he was asked by De Niro to be in the movie. It’s very fortunate that Pesci agreed to come out of retirement for the film as it wouldn’t have been as impactful without his supporting performance. He solidifies this remarkable acting trinity with his calm yet commanding presence. Also making appearances are an array of famous comedians, including Ray Romano as the teamster attorney Bill Bufalino and cameos by Sebastian Maniscalco as Joseph ‘Crazy Joe’ Gallo and Jim Norton as the legendary comedian Don Rickles.

Thanks to Netflix funding the project and allowing Scorsese the creative freedom to make it the way he imagined, the movie gives viewers both the comfort of a Scorsese film and the experience of seeing a new creative venture. It’s already recognized by the Board of Review as the Best Film of 2019 and listed on AFI’s Motion Pictures of the Year 2019 list. Without a doubt, this movie will be nominated in several Oscar categories and hopefully win a few.

Though the film is almost three-and-a-half hours long, it kept my attention the whole time. I was drawn immediately into the story and floored at how fast it went by, keeping me mesmerized for every minute. Filled with nostalgia, suspense, great music, relatable characters and beautiful imagery, The Irishman is sure to be remembered as one of Scorsese’s best films ever.