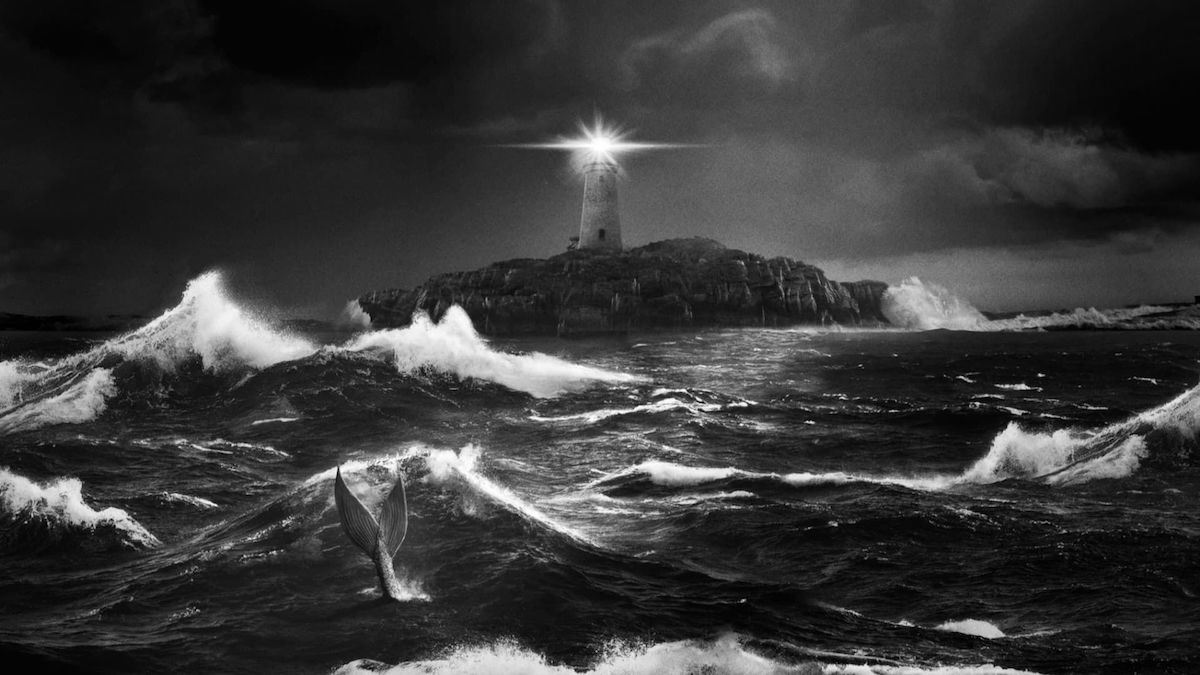 is a life-long fan of movies and the arts, especially passionate about animation and cartoons. A jack of all trades, Isa curated and planned an LGBTQ+ film festival for her community college, contributed as a staff writer for the El Don newspaper, and served as head writer and editor a fan-made visual novel based on a popular cartoon. A current psychology student at CSULB, working with The Frida Cinema feels like home to her, where she can be involved in art, writing, and communities she would otherwise deeply miss within her current field of study.
All Posts

The Lighthouse: Mythic And Multifaceted

Darkness… a thrum slowly creeps its way into your consciousness as the faint wail of a foghorn sounds off and a thick curtain of grey fog appears. The faintest ghost of a vessel breeches through, and the thrumming is now a drone as we’re shown the crashing waves against the bow’s edge in time with the machinery’s rhythmic, laborious churning. As chains rattle with the boat’s movements, so too does the pair of silhouetted figures cloaked in black at the boat’s front. They don’t move of their own will, simply faced forward as a beacon and a swath of land come into sight. A glimpse into their trudge up and along the gravel seashore, across dangerous rockage, through shrieking gulls, and finally to the lighthouse, perfectly framed by the strategic aspect ratio as its horn sounds again. Then, a cut to the figures from head-on: poised like a 19th century portrait, they return our stare as we take in burdened eyes and bristled, salty textures. But then the striking stillness is brought back to life by the foghorn’s rude blare; the younger man winces, grimacing, while the elder contentedly mouths his tobacco pipe. The younger’s gaze returns forward, and finally we see what he’s lingering on: the last wisp of ship as it escapes away into the clouds.

It’s a cold, eerie welcome into the world of a wickie as much as it is an atmospheric delight masterfully crafted by writer-director Robert Eggers. While his debut film The Witch began with exile from civilization into the forest, The Lighthouse spares no time exposing the characters or audience to the elements (or to Willem Dafoe’s flatulence). It’s this transportive power that’s carries over from Eggers’ last film with a vengeance, enthralling in just the first few minutes of screentime until its hold is released by the first note of the credits’ jaunty vocals and you’re left to your own mental devices. If you’re like me, you had the rare and powerful desire for an immediate encore, mentally entertaining the notion of buying another ticket on your way out much more than is reasonable.

To Times Unknown, Yet Remembered

Whilst striving for a “transportive” experience, Eggers’ acknowledges that historical accuracy and period research is valuable in its own right but clarifies that he mainly seeks to implement it in the service of a certain atmosphere he’s trying to create and a certain story he’s trying to tell. In fact, his periods of extensive, obsessive study surrounding the setting of interest is where he begins the creative process, and becomes inspired to tell a particular narrative. There’s no denying that his assertion is right: when an audience has been immersed into a different time and place, so vivid and grounded in reality, a world where sailor’s souls inhabit seabirds and lighthouses seem to breathe becomes just as ominously palpable. Instead of becoming another piece to echo the same derivative works and influences which may have lost their impact over time, his films feel like a glimpse right from the source. Though this certainly doesn’t mean every writer-director should be expected to conduct years of research for an excruciating level of detail, but it’s the very foundation on which Eggers crafts his literary screenplays and our two main actors their characters.

The Lighthouse, although isolated in its narrative scope to a single isle, has the weight of things much more grand within every aspect. Ripe with plenty of parallels and references to specific ancient mythologies and visual artwork from various points in human history, the hyper-specific setting is what brings a new life to humanity’s oldest questions and unexpectedly weaves it with contemporary concerns. I’d wager that no one expected the phrase “why’d you spill yer beans” to be a horrifying act of gaslighting, or a film so lecherous and dripping with homoeroticism to also represent the catastrophic consequences of capitalism on the working class.

And yet, Eggers revels in enigma and nuance, often resulting in dualities one can’t help but look into. The lighthouse is a phallus on the outside but the myth of the American Dream within; “I thought you liked me lobster” is both a humorous moment, and toxic codependency. Even within his own canon, the filmmaker’s first two feature films compliment each other: The Witch as a Puritan woman’s worst nightmare and The Lighthouse as an exploration of masculinities and hedonism.

Of course, it’d be a shame to leave out mention of the incredible, show-stopping performances from both Willem Dafoe and Robert Pattinson; the fascinating oddities and contrast of their characters exists behind the scenes, which adds yet another layer surrounding the film. The actors differed completely in their creative processes: Dafoe loving rehearsals whilst Pattinson hated it. The former would work for the day and go to bed until shooting again the next day, but the latter would end wound-up and wanting to go clubbing. Thomas is a Melville figure mirroring the real life wickies of yore, and Winslow’s character was inspired by a video of a high man yelling in a club that Pattinson came across on Instagram and described as “wanting a daddy”. The making-of is just as, if not more bizarre, than the end result, but it’s also hilarious and the memes top-tier. In just a couple months, my regular blasting of “Doodle Let Me Go (Yaller Girls)” in the car with the bass boosted as if it was a club jam propelled an old-timey sea shanty to the top of my most listened Spotify tracks of the year. If nothing else, I’m incredibly thankful to this film for allowing post-Twilight me to see how talented, bizarre, and unhinged Pattinson truly is before his return to the blockbuster scene and for finally allowing me to see Willem Dafoe as something other than the cackling Green Goblin (though old habits die hard).

It’s ironic that a film depicting such misery is the one to bring me the most joy since I can remember, and a fixation I’ll ride the high of until it the bubble bursts, or my loved ones crack and silence me themselves. My personal favorite film of 2019 and one of my absolute favorites I’ve ever seen, I’m looking forward to uncovering more in future watches. That being said, I’m also keeping my fingers crossed painfully tight for Eggers’ fabled take on my gothic boy, Nosferatu.