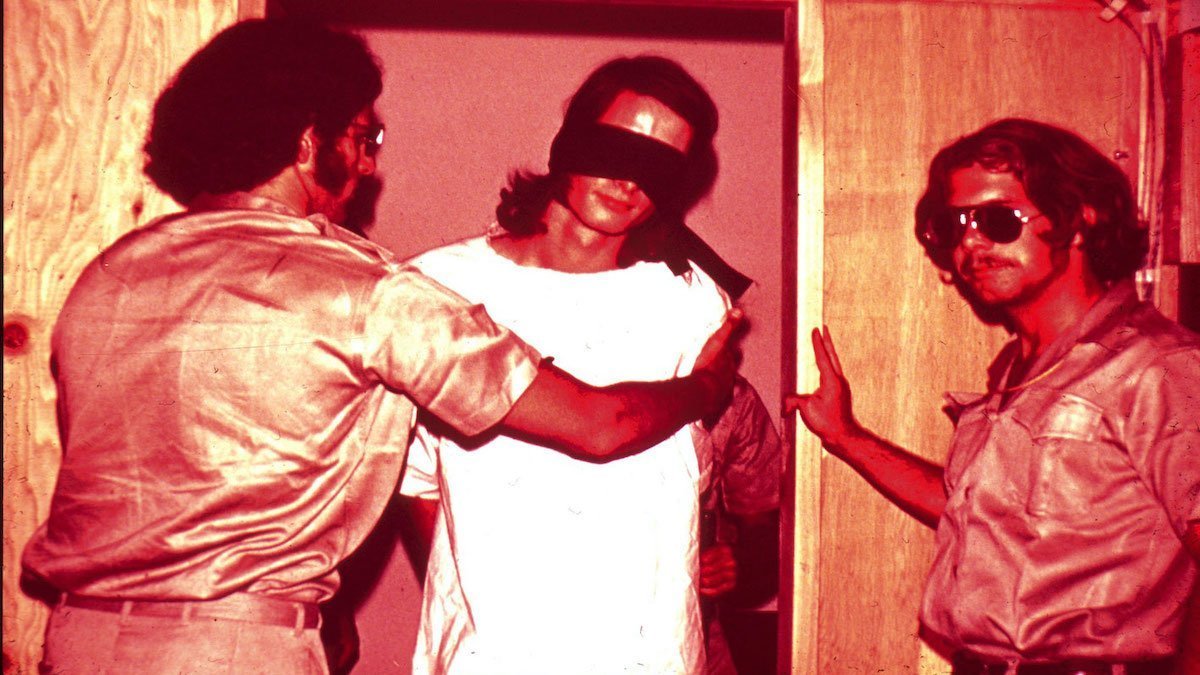 The Stanford Prison Experiment: Lock Up

“It’s a remarkably accurate portrayal. Now, the only issue of course is they’re compressing six days into two hours – it is a two hour film. So in fact, they had to leave out many traumatic scenes. There are no scenes that were put in that didn’t happen in the real study. There were no scenes that had to be put in for the drama. If anything, they left out a lot of what I consider powerful scenes, which they actually had in and it just went too long so they had to cut it out. I’d say it’s roughly 90 percent accurate.” — Dr. Philip Zimbardo, 2015 interview 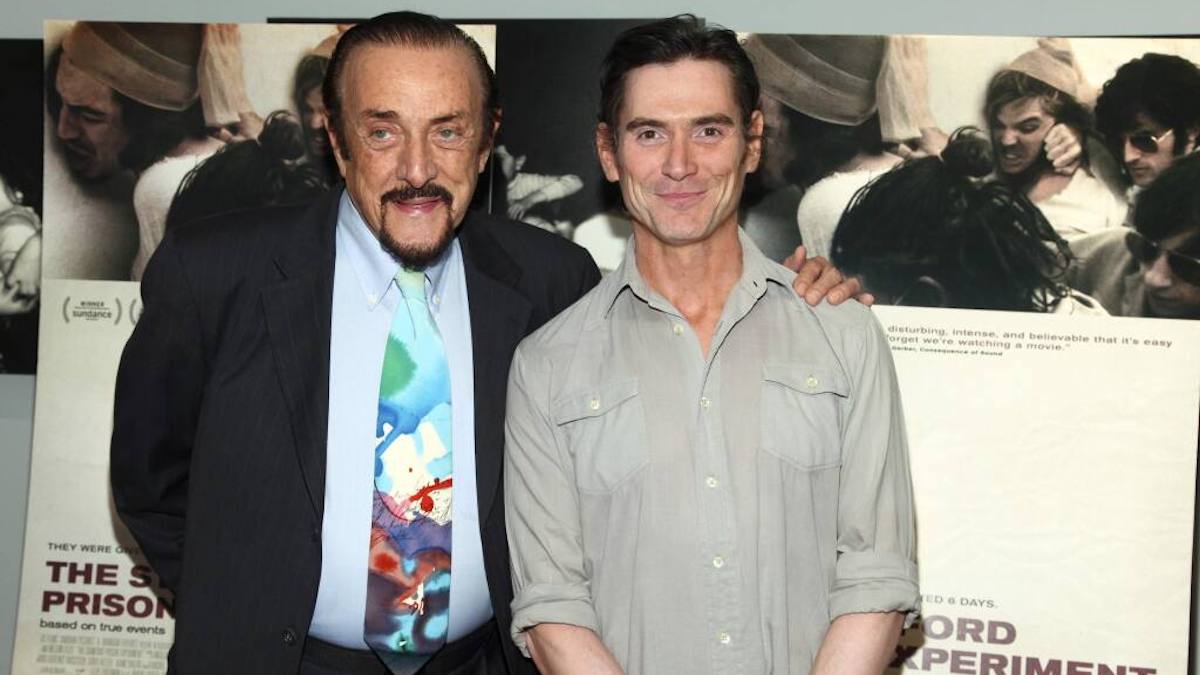 In fiction, we talk about the past as a means to invoke the present. Historical allusions are often too deliberately placed to be considered incidental to the story – very often they are the story. So because it’s a movie based on true events, it may feel easy to read Kyle Patrick Alvarez’s stunning and implausible third feature The Stanford Prison Experiment, as representative of some thematic whole. Your particular reading of the film, a litmus test all its own; perhaps this experiment signified the decay of capitalism in our institutions; signified the prevalence of apathy in our societies; the differences between men and women.
The ability to speculate wildly about art is one of its attractive qualities, and this film contains irresistible wonders in spades. Yet it becomes clear during the film’s magnetic opening scene that Alvarez is rejecting these accepted notions of historical didacticism in favor of something more absolute, more organic.
The film opens on an ad in the local Stanford newspaper. The letters and words are carefully and purposefully arranged on the print matrix. It looked like this: 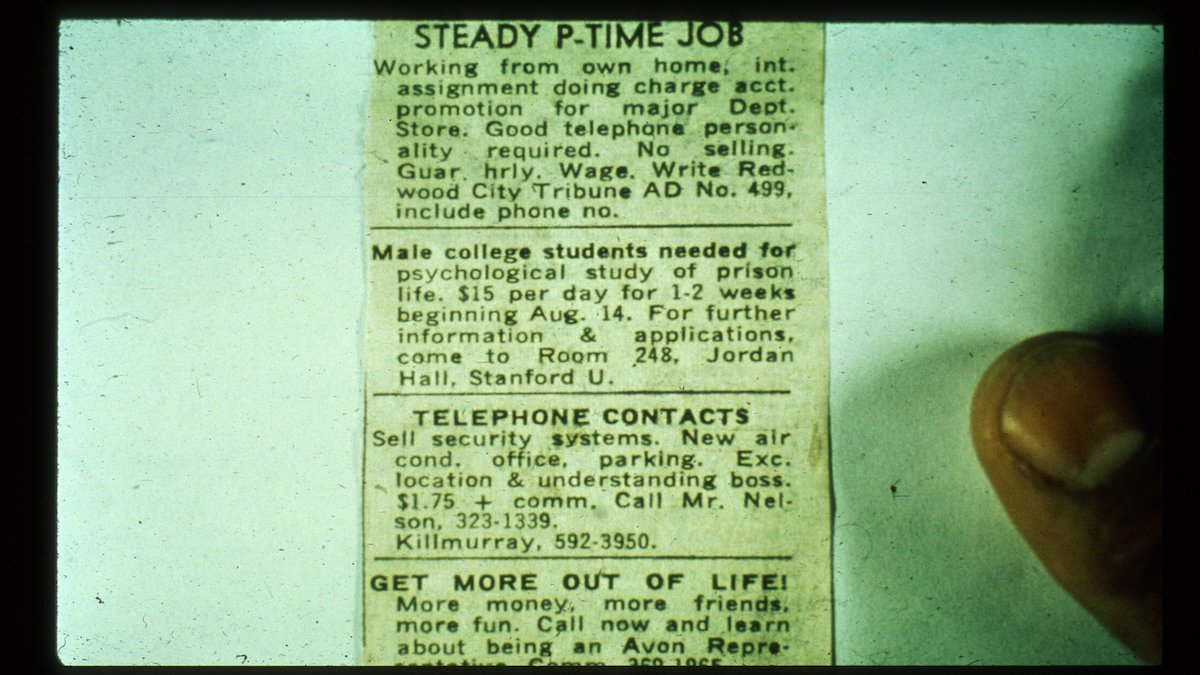 “Male college students needed for psychological study of prison life. $15 per day for 1-2 weeks beginning Aug. 14. For further information & applications, come to Room 248, Jordan Hall, Stanford U.”
This simple request is cast in a relief, inked, printed, and delivered to folks all across the Stanford area beckoning someone, anyone, to make scientific history. This emphasis on language in the opening moments of the film confirms Alvarez’s staunch commitment to the realism of the story without the need for embellishment. The barenaked letters suggesting a much more focused version of the story then you may have heard in psych class.
In an attempt to observe the mechanics of penitentiary life, Dr. Zimbardo believed his experiment would lead to breakthroughs in inmate welfare, prison reform – it was a chance at justice on the smallest possible scale but justice nonetheless. 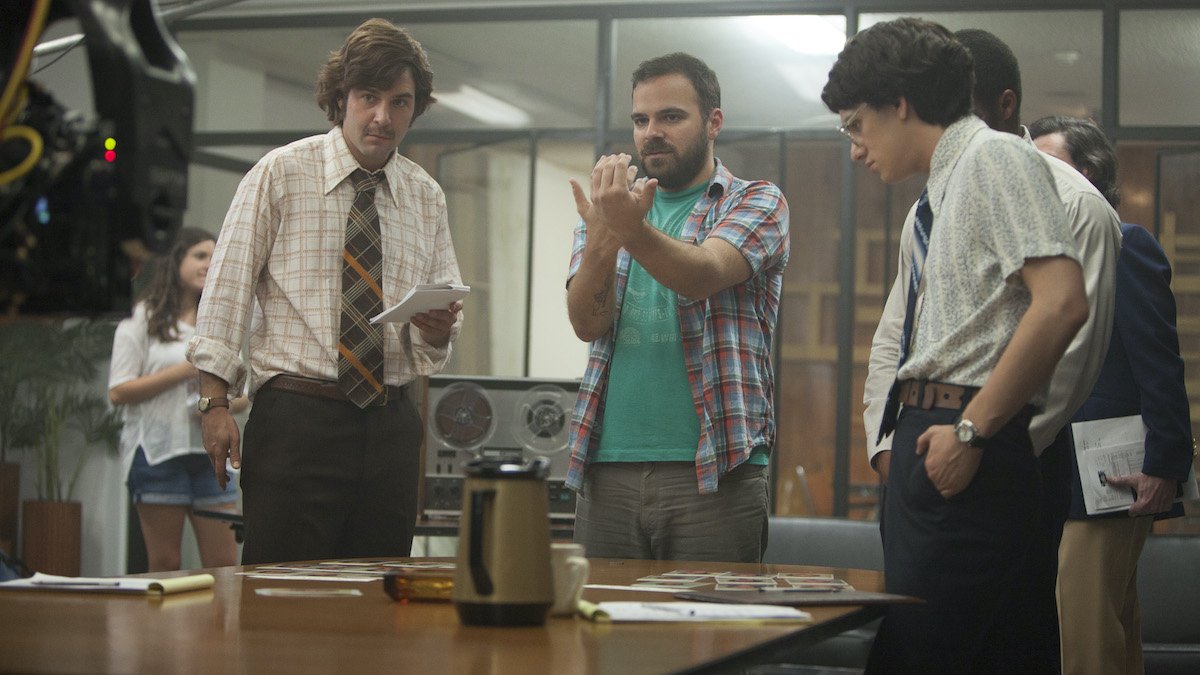 And yet, a noxious cloud hangs over the entire film. Its reputation and infamy as a failed research project undercuts each conversation about ethics that appear in the film. When, in response to a question about what the point of all this prison stuff is, Billy Crudup as Zimbardo delivers a line like, ‘This could be great.’, it’s hard to know if the movie means to satirize him or not.
Those familiar with research psychology can pinpoint the exact moment the experiment stops being an experiment – some may argue that use of the word ‘experiment’ is a misnomer altogether. Though you don’t have to be a professor to realize the degrading effects language has on the mind.
Even if the audience has no familiarity with the real-life events, taken at face value the film plays like any good thriller ought to. In its chiseled editing and merciless staging, the film needs to invent very little in this story to make an effective chamber piece. Part of this is due to the strong performances of the film’s young male ensemble, a who’s-who of modern indie darlings, and part of it is Alvarez’s voracious tenacity for specifics. 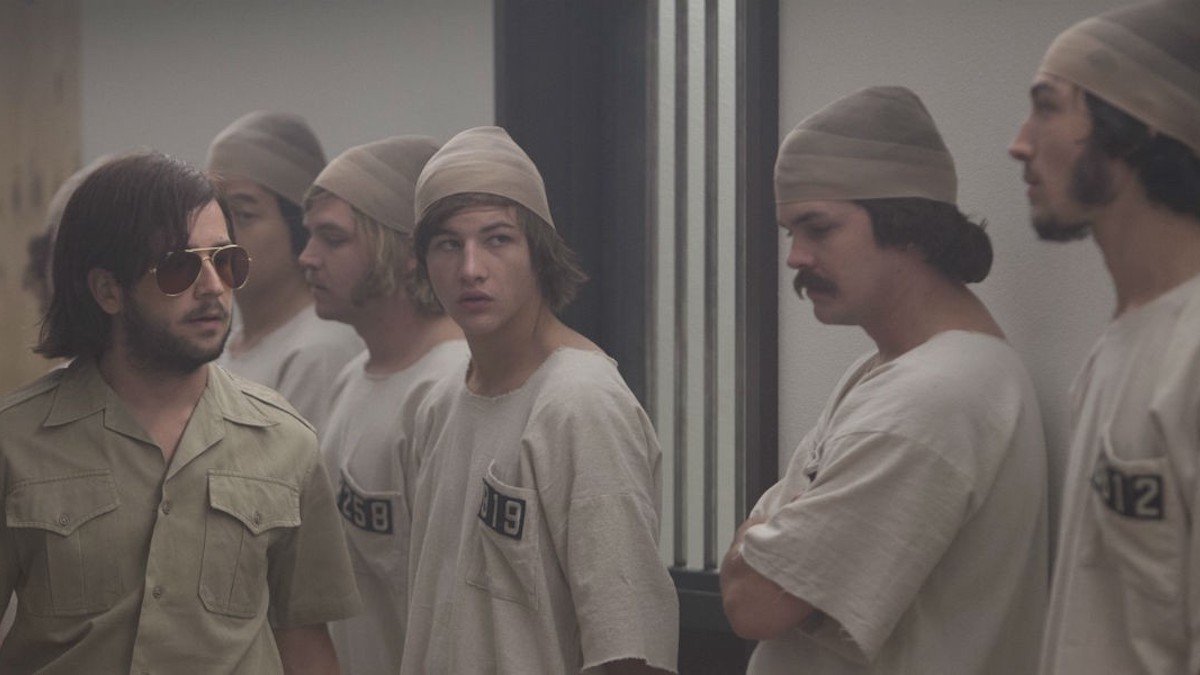 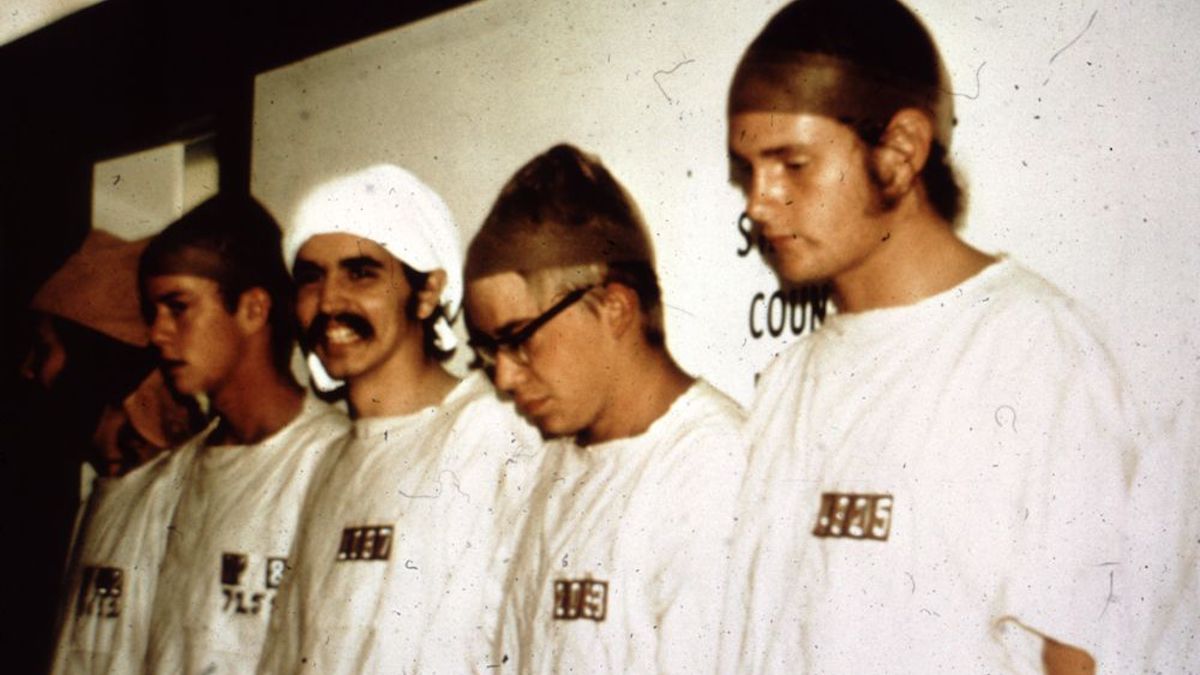 Interview dialogue, costumes, sets, hair & makeup, all finely tuned to the early ’70s period broadly, and the experiment subjects specifically. The attention to detail here feels then not obligatory, but rather conspicuously designed to elevate the delirium scene-to-scene. Real-time sequences, like the first lineup where all the prisoners learn their numbers, erode the psychology of the characters onscreen as well as the audience’s because they observe such strict banal detailing. The film need not worry about being believable when it hews so closely to the real-life events that it depicts.
More than mere re-enactment however, Alvarez uses cinema to fully express the essential subjectivity of the test volunteer’s experience that was nearly invisible to their test practitioners. At his most Kubrickian, Alvarez punctuates his scenes with shots from the POV of the prison “security” camera, highlighting the insulating effect the camera has on our interpretation of recorded events. When in the cramped “prison” environment, Alvarez instead lets the film play out mostly in close-ups. A necessity of the narrow environment, but psychologically it gives us a great view of each actor’s large noggin (a container of eyes and brains where these decisions of authority or submission take place). 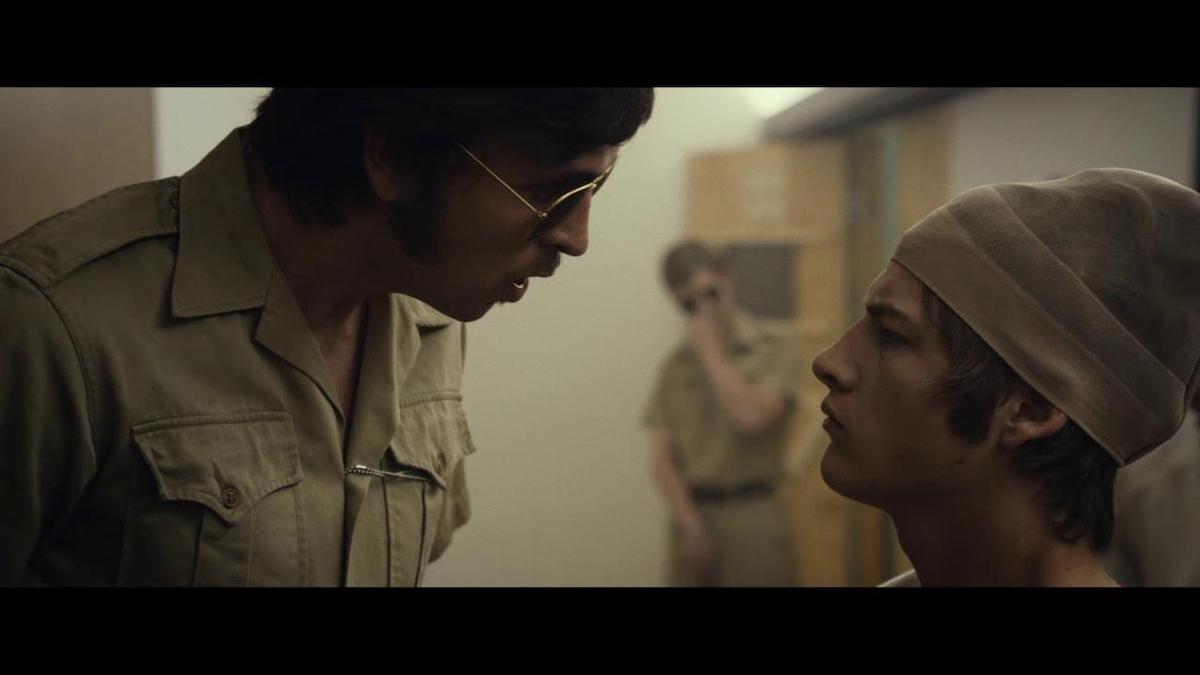 The fifteen-buck-a-day stipend offered to Zimbardo’s test subjects equates to $98.10 in 2021 dollars. If the test went the full 2 weeks, a volunteer had a chance of walking away with nearly $1400 by the end of it. This financial coercion is, intentionally or not, the most crucial element of not just Zimbardo’s experiment but of Alvarez’s film as well. The intent to prove the decay of incarceral institutions inadvertently proves the decay of academic ones; as stated by Zimbardo in the film, “this is about how an institution can do this to a person”.
Other than its relationship to the severely broken American prison system, Alvarez makes no overt attempts to connect the story to the present-day of 2015. Instead, it’s clear that the triumph of The Stanford Prison Experiment lay with its unflinching commitment to reflect a story rather than prescribe one. What will remain long after endless thematic speculation will be this sculpted, well-oiled machine of a film whose technical brilliance is outmatched only by its historical fidelity. 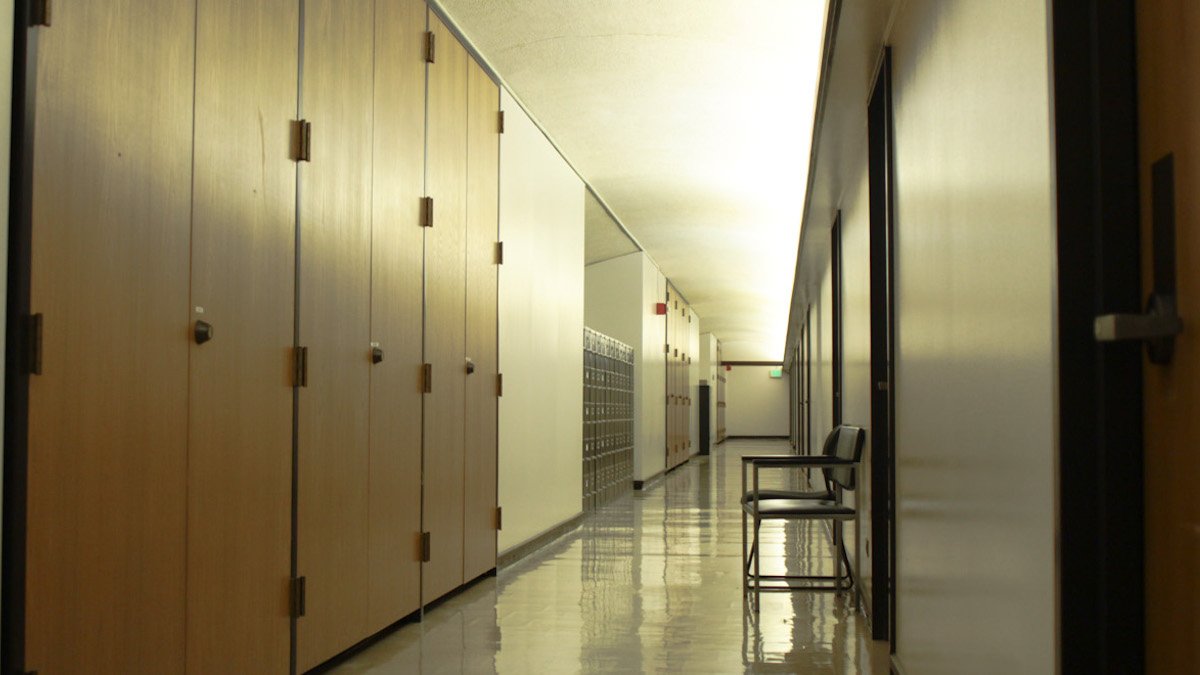